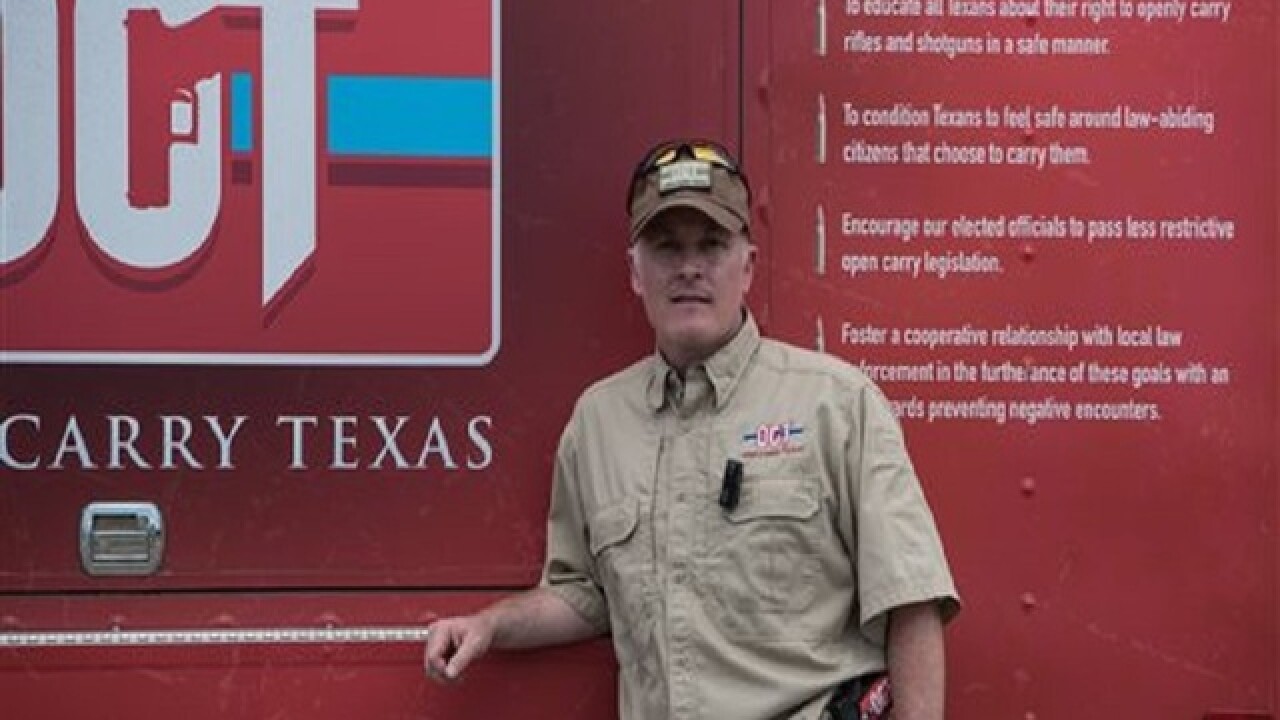 By: Associated Press
Posted at 12:21 AM, Jul 11, 2016
PARIS, Texas (AP) — Gun-rights activists, some of them wearing camouflage and military-style gear and openly toting rifles and handguns, marched alongside the hundreds of people who flocked to downtown Dallas last week to protest police shootings of blacks.
Their presence was part of the new legal landscape in Texas, which earlier this year allowed people to openly carry firearms in public.
Moments later, when a sniper gunned down officers patrolling the peaceful march, killing five, the attack ignited panic and confusion. Who was shooting? Were the people with weapons friend or foe?
It was the same nightmare scenario that some law enforcement officials predicted when Texas approved the open-carry proposal.
Dallas Police Chief David Brown estimated that 20 to 30 open-carry activists attended the rally. He said some wore gas masks, bulletproof vests and fatigues. They ran when the shots rang out, but the presence of so many armed individuals at the scene of a sniper attack caused instant confusion.
"Doesn't make sense to us, but that's their right in Texas," Brown told CNN, adding: "For our officers, they were suspects. And I support that belief. Someone is shooting at you from a perched position, and people are running with AR-15s and camo gear and gas masks and bulletproof vests. They are suspects until we eliminate that."
One man in the crowd, Mark Hughes, was carrying an AR-style firearm and wearing a camouflage T-shirt. In the early moments after the attack, police released a photo of Hughes describing him as a suspect. He was questioned and released, and authorities soon announced that the attack had been the work of a single gunman named Micah Johnson.
In the aftermath, President Barack Obama criticized the open-carry law.
Police, Obama said, "have a really difficult time in communities where they know guns are everywhere. And as I said before, they have a right to come home, and now they have very little margin of error in terms of making decisions. So if you care about the safety of our police officers, then you can't set aside the gun issue and pretend that that's irrelevant."
Forty-five states have laws that allow citizens to openly carry a firearm in public places.
During debate over the open-carry issue, some people in Texas law enforcement expressed concerns, fearing that it would lead to panic, especially in active shooter situations. The state, which legalized concealed-carry firearms in the 1990s, now has more than 850,000 residents with licenses to carry.
C.J. Grisham, the president and founder of Open Carry Texas, stood Saturday outside the Lamar County Sheriff's Department in Paris with a small group of people, most of them with a handgun and spare magazines visible and strapped to a belt. They were there in part to protest the agency's refusal to allow people to openly carry a firearm into the building, which is connected to a jail, and to talk about what issues are next on the frontier of gun rights.
Grisham, who served in the military in Iraq and Afghanistan, travels around the state with a trailer in tow. Inside, he's got T-shirts, stickers and pamphlets that trumpet the group's key messages.
"We're not the threat," Grisham said.
As he spoke, members of the group nodded their heads. They expressed concern that requiring people to carry concealed weapons is sometimes impractical. Texas weather can make it difficult to conceal a gun without wilting in the summer heat or to shed a coat in the winter. That puts them at risk of breaking the law by revealing they are carrying a weapon.
"That's what this is really about: being able to get comfortable and not become a criminal," Grisham said. "If you boil it down, the only difference between open carry and concealed carry is a thin piece of fabric."
None of those who stood outside the sheriff's department said they had been stopped by police. And they maintain they haven't caused any panic among civilians worried when they see their firearm.
Still, Grisham offers a practical suggestion for preventing alarm: Carry a long gun slung over your back with the muzzle pointed downward and don't touch it. That way, "it's hard to call it confrontational," he said.
On Sunday, Hughes was quizzed by his pastor about his decision to attend the protest with a gun.
"What in the world were you thinking?" Bishop T.D. Jakes asked him during services at The Potter's House, a megachurch with 30,000 members.
The crowd of several hundred people laughed. "I'm just curious," Jakes said, chuckling.
Hughes said it was an opportunity to exercise his rights and make a statement, and he would do it again.
"I understand and respect your right," Jakes responded. "But I think the right is wrong."
Several in the audience shouted in agreement.
Copyright 2016 The Associated Press. All rights reserved. This material may not be published, broadcast, rewritten or redistributed.