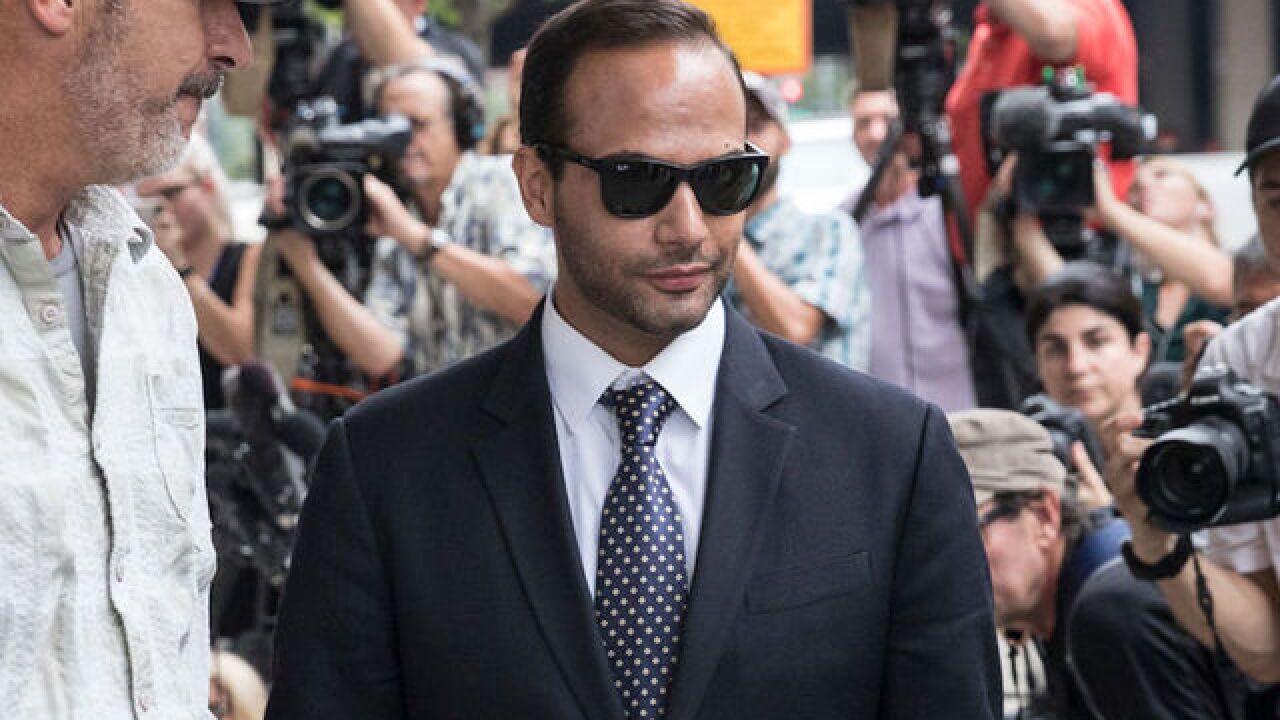 George Papadopoulos did not want to go to prison Monday. But 22 months after he first lied to the FBI about his contact with Russians while working for the Trump presidential campaign, the first person charged by the office of special counsel will do his time.

Papadopoulos will surrender at the federal prison camp in Oxford, Wisconsin. He will serve a 14-day sentence, then be on probation for a year. He will also pay a $9,500 fine and participate in community service.

More than a year ago, Papadopoulos was a surprise early target in the Mueller investigation and since then has swung from working for the President, to turning against him and back again.

"The truth will all be out. Not even a prison sentence can stop that momentum," Papadopoulos wrote to his 74,000 Twitter followers Sunday night, as he prepared to travel north from Chicago, where his parents live. "The wool isn't going to be pulled over America's eyes forever. Much love."

The final lurch of Papadopoulos' legal situation and public unrest comes after he swapped legal teams, lost last-minute requests to the judge to pause his sentence and after his wife asked for a presidential pardon online and in various media interviews.

From the start, Papadopoulos had an unusual approach to his legal situation.

While much of the public was focused on the indictment and arrest of Trump campaign leaders last year, Papadopoulos had secretly agreed to plead guilty in the Russia probe. The day Robert Mueller's team revealed their case against Trump campaign chairman Paul Manafort and his deputy Rick Gates, the court unsealed Papadopoulos' conviction, turning the young and unknown foreign policy adviser into a near-household name.

He "was the first domino, and many have fallen in behind," Papadopoulos' former lawyer wrote before his sentencing.

Throughout 2017, federal authorities caught Papadopoulos telling several lies about his contact during the Trump campaign with the Russia-connected professor Joseph Mifsud and a woman who claimed to be Russian President Vladimir Putin's niece. Mifsud, taking interest in the Trump adviser, told him the Russians had collected "dirt" on Hillary Clinton in thousands of emails, and Papadopoulos jostled within the campaign to arrange a meeting between then-candidate Donald Trump and Putin.

The meeting never happened, but a barrage of finger pointing did.

Papadopoulos says he raised the idea of the Putin meeting directly with Trump and Jeff Sessions during a campaign session in the Trump International Hotel. Both men were receptive to the idea, Papadopoulos has said in court papers. But Sessions has contested this in sworn testimony he gave to Congress.

After his arrest was made public, administration officials called Papadopoulos a "coffee boy" within the campaign.

When the FBI spoke to Papadopoulos in early 2017, he downplayed his communications connected to Russia. Federal prosecutors said recently his lies thwarted their ability to pursue Mifsud as part of the Russia probe.

Though Papadopoulos has said he cooperated with the Mueller investigation, prosecutors claim he did not give them any significant help.

At the time of his plea last October, federal prosecutors called Papadopoulos a "small part" of a "large-scale investigation."

Some -- but not all -- areas of that probe have since become apparent.

The Justice Department charged 26 Russian individuals for attempting to interfere in American elections this year. That includes criminal cases against Russians involved in an alleged social media propaganda scheme that targeted US voters, and Russian military intelligence units for hacking the Democratic Party and Clinton campaign. Mifsud and the woman Papadopoulos spoke with have not been charged publicly in US courts.

Two of the other Mueller defendants have already headed to prison, and for longer than Papadopoulos. The Dutch lawyer Alex Van Der Zwaan stayed almost a month in a Pennsylvania federal prison for lying to investigators, while the Californian fake ID salesman Richard Pinedo is being held in a southern California prison until mid-May 2019.

In all, Papadopoulos was the first of 35 people and companies to be charged by Mueller to date.

At his sentencing, Papadopoulos delivered a humbling mea culpa -- reading a prepared statement that was not aligned with the President, who regularly rails against the Mueller investigation.

Papadopoulos said he realized he had hurt the federal investigation into Russian influence in the 2016 presidential election.

He told the judge he had respect for the court system and legal process, and that his guilty plea and sentencing should signal to other witnesses that the Mueller investigation "has global implications and that the truth matters." His then-lawyer, Thomas Breen, told the judge Papadopoulos was "unsophisticated," "naïve," "made stupid, stupid mistakes," and "was a fool." (Papadopoulos has since hired a different legal team.)

"In hindsight, lying to federal agents about such a critical issue could have harmed our nation, and for that I am deeply embarrassed and personally ashamed," Papadopoulos said in court in September. He then asked the court for a "second chance to redeem myself."

Outside the courtroom, his tenor changed. He began using some of the same buzzwords as Trump, calling investigators' work "corrupt."

On Twitter especially, Papadopoulos leaned into conspiracy theories about the use of foreign intelligence surveillance in the US, claiming he was a victim. His wife, Simona Mangiante, publicly asked Trump for a pardon. They have raised more than $16,000 in online crowdfunding, which Mangiante says is for legal fees, according to a GoFundMe site under his name.

Papadopoulos and Mangiante teased that they may have "exculpatory evidence" that would show he was set up by authorities. Court filings reflecting those ideas never came.

In court, Papadopoulos' new legal team made two requests this month, both attempts to delay the start of his sentence. They expressed hope that a constitutional challenge against Mueller would succeed and help his cause. That case, now on appeal, was brought by an associate of Roger Stone's who wants to dodge a grand jury subpoena.

A federal judge, Randy Moss of the US District Court for the District of Columbia, denied Papadopoulos' requests on Sunday, saying Mueller would likely withstand the court challenge. Besides, Papadopoulos under his plea agreement has no legal avenue to ask for such a thing, the judge wrote.

Papadopoulos says he is willing to publicly testify to Congress once his prison sentence ends.

His attorneys did not respond to requests for comment.