For the first time in Scripps Spelling Bee history, 8 champions are named! 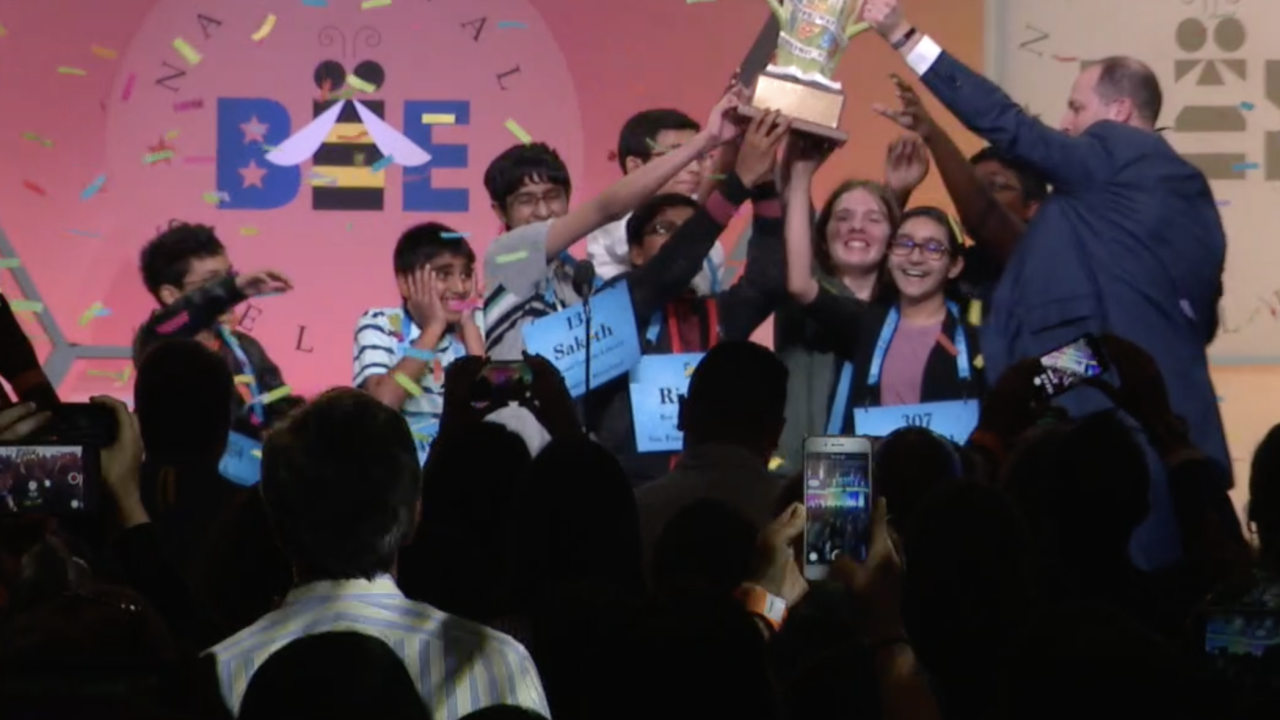 The 2019 Scripps National Spelling Bee champions have been named!

In a surprise announcement after Round 17 of the competition, official pronouncer Dr. Jacques Bailly announced there would only be three more rounds.

The audience erupted in applause and gave a standing ovation to the eight incredible spellers, who remained as of 11:35 p.m. EST. They were Rishik Gandhasri of California, Erin Howard of Alabama, Saketh Sundar of Maryland, Shruthika Padhy of New Jersey, Sohum Sukhatankar of Texas, Abhijay Kodali of Texas, Christopher Serrao of Pennsylvania and Rohan Raja of Texas.

The start of Round 20 began just before midnight EST.

Rishik Gandhasri was first. After spelling auslaut correctly, he was named the first champion. The others followed suit:

“I was last. I had to watch everybody get applaud and just wait to spell my word, not knowing whether I would spell it right or not,” said Rohan Raja of Texas in a press conference following the competition.

Adam Symson, president and chief executive officer of the E.W. Scripps Company, presented the new Scripps National Spelling Bee championship trophy to the eight winners. All the winners' names will be on this year's trophy.

“Once again, the Bee was a thrilling competition that showcased the young spellers’ vast knowledge of vocabulary alongside their poise and composure,” said Symson. “These winners are tremendous champions deserving of the prizes, opportunities and recognition coming their way. Scripps takes great pride in seeing the positive influence the Bee has on millions of children across the U.S. and the world, and tonight’s historic competition is an excellent example of this.”

Following the competition, the eight winners reacted to the historic moment they all were declared champions.

“I really didn’t wanna be the one who didn’t make it to the championship, so yeah, that would’ve been really embarrassing,” says Erin Howard of Alabama. “But fortunately, that didn’t really happen to any of us.”

“I was excited, pressured and worried,” Abhijay Kodali of Texas.

Each winner will receive a $50,000 cash prize. They will also travel to New York City to appear on Live with Kelly and Ryan and to Hollywood to be on ABC’s Jimmy Kimmel Live!

It was a record-setting 92nd running of the Scripps National Spelling Bee, with the number of spellers in the competition, the amount of the cash prize, and now, eight spelling champions.

“This is a night to celebrate the remarkable academic achievement of a group of the world’s most talented spellers,” said Paige Kimble, executive director of the Scripps National Spelling Bee. “These spellers have conquered the dictionary unequivocally with their ability, skill and command of the English language. It’s an incredible achievement, and we salute all the years of hard work and dedicated study that brought these intelligent young people to the world stage. We congratulate them all.”