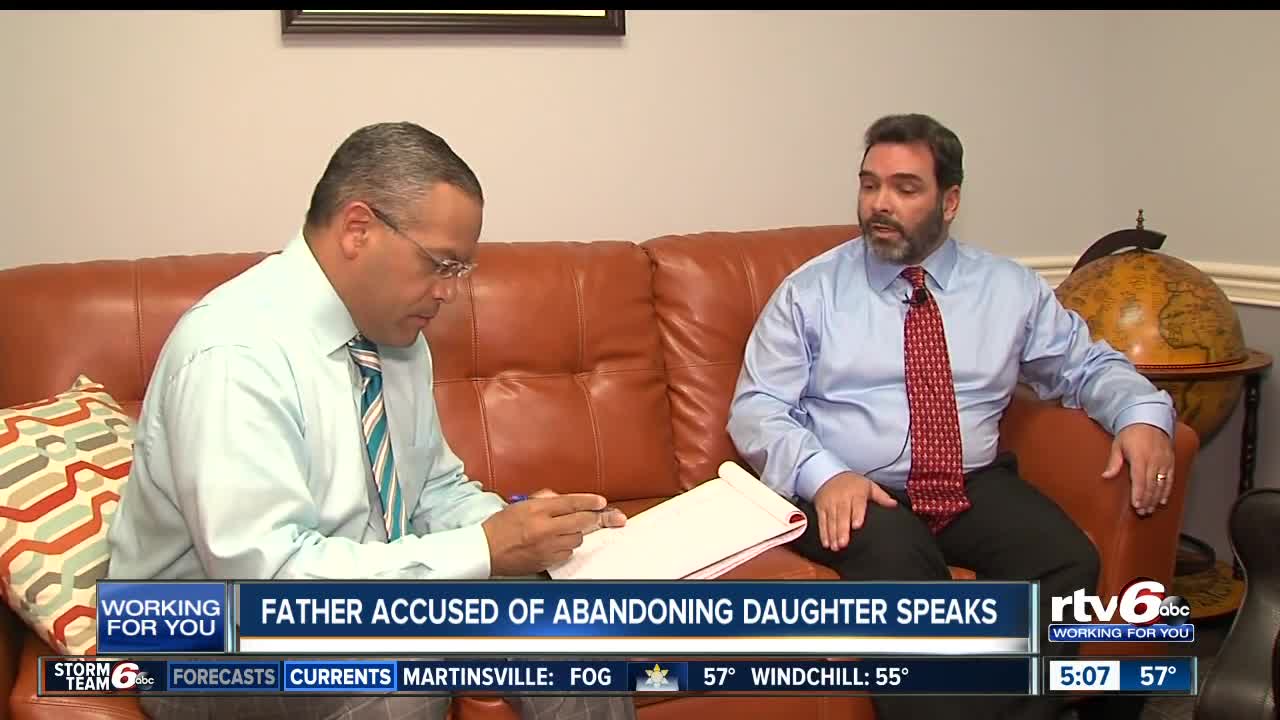 The man accused of renting his adopted daughter an apartment and abandoning her in Tippecanoe County says there is more to this story. RTV6's Rafael Sanchez sat down with Michael Barnett to talk about the case. 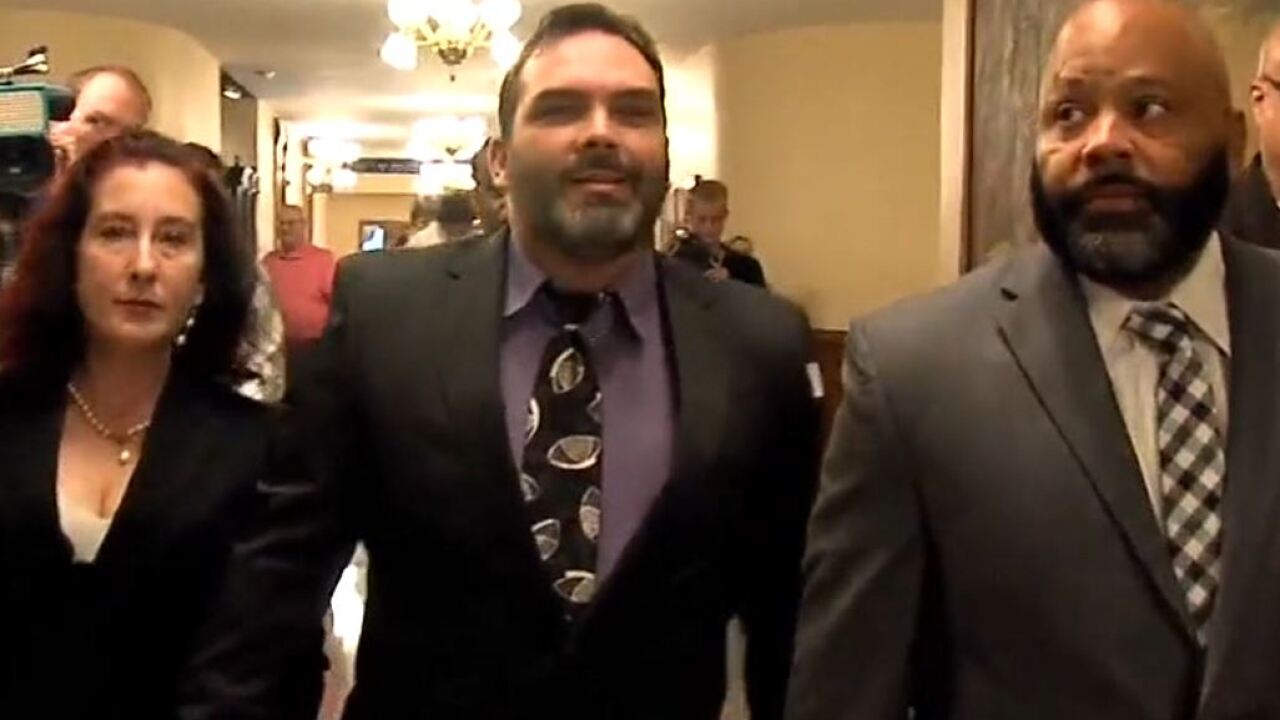 INDIANAPOLIS, Ind. — The man accused of abandoning his adopted daughter after having her age changed says the girl was really an adult who had tried to hurt and kill him and his wife on multiple occasions.

Michael Barnett and his now ex-wife, Kristine, have been at the center of an Indiana case that has the world's attention. The pair are accused of adopting a young girl from the Ukraine back in 2010, who was allegedly 6 years old, and then having her age changed two years later to 22 years old. Court documents filed in Tippecanoe County claim the pair then rented an apartment for the girl in Lafayette in 2013 and left her there, alone, while they moved out of the country with the rest of the family.

Michael says there's more to the story than what's been told and that "young girl" isn't really as young and innocent as she looks.

But since the charges were filed against the Barnetts in September, the rest of the story has begun to slowly unfold in the public eye.

Now, Michael Barnett is sharing his side and says he hopes that it can shed some light on the situation his family has been dealing with for over seven years.

"There are a lot of things out there that are just inaccurate," Michael told WRTV.

The story began in 2010. Michael says he and Kristine, who were married at the time, had a large home and extra rooms to spare. Michael says they felt "blessed" and were willing to share that blessing with those in need.

The couple got the call on April 22 that a 6-year-old girl from the Ukraine, who was special needs and suffers from a rare form of dwarfism, was in need of a family. Michael says the adoption agency gave them 24 hours to make a decision and they were given very little information about the girl.

"You've got 24 hours, we're not giving you any information, it's a closed adoption," Michael said he was told. "So here's all you're going to get. Here's two pictures, here's a Ukrainian Birth Record and here's one single doctor's visit."

Michael said he and Kristine were "thinking with their heart" when they agreed to the adoption. The girl officially joined their family on August 26, 2010.

Michael says they quickly noticed suspicious behavior from the girl, including developmental changes consistent with adults.

"It wasn't long after that that Christine discovered evidence of a monthly menstrual cycle that (the girl), when confronted, stated that she did have one and she had been hiding it from us," Michael told ABC News.

"(She) would do things like place clear thumbtacks on the stairs face up so that when we would walk up the stairs we would be stepping on thumbtacks to pain and injure ourselves," Michael said. "Very shortly thereafter, (the girl) ends up attempting to poison Kristine. She was pouring a bottle of Pine Sol into her coffee mug."

That wasn't the only attempt Michael says the girl made on their lives.

"She had attempted to kill my wife for a second time, this time by trying to pull her into an electric fence," Michael said.

And each time it got worse, Michael said they tried to get help, but the police kept pushing the girl back into the system.

"We were asking police, please, after the second attempt, we would like to press charges. Please arrest her," Michael said. "And they kept pushing her into the hospital system instead of pressing charges."

Which Age Is True?

He claims doctors and other testing proved that the girl was much older than they were told, and a court system even ruled, based on that evidence, to change her age.

"In 2012, based on evidence presented to the court, the Marion County Superior Court ruled that her birth year would be changed from 2003 to 1989, effectively changing her from eight to 22 years old."

Michael claims another judge in Hamilton County came to the same ruling.

That same year the girl spent nine weeks at the state mental hospital, according to Michael. He said when she was done, they let her go just like they would have with any adult.

From there, she was sent to a half-way house where she was surrounded by drug users.

"She was unsafe there," Michael said. So they went and got her out. The couple then found the girl a home in Westfield where she could live on her own as an adult.

Even then, the Barnetts wanted to make sure the girl was safe and could take care of herself.

"During that time, when she was first placed there, my wife and I — at the time — were still a bit concerned about what is she capable of, can she handle this? We sent a home health aide out to here, she billed us with 260 hours of time to notate that [the girl] could be on her own," Michael said.

About a year later, Michael said his 15-year-old son got an offer to attend a university in Canada that the family couldn't pass up. But because of his age, they had to make the decision to move with him.

It was around that time that the girl moved to Lafayette, which is where everything else began to unfold.

In 2016, Michael said a family filed a motion in Tippecanoe County to have the girl's age reversed.

"Tippecanoe County said, 'hey, this has already been decided. It was decided in Marion County court. If you want to pursue this, go there,'" Michael said. "So in 2017, Marion County Superior Court, once again, different judge - same courtroom. We had a four-and-a-half hour hearing. Expert testimony was provided. There was an exam, cross examination. (The girl) was represented by two different attorneys who were working pro-bono. At the end of that hearing in 2017 the judge once again ruled, 'based on evidence presented, that you are an adult.' Her last words were: "[The girl], we do recommend that you start living as an adult.'"

Michael said the attorneys in that case appear to have accepted the decision and have not filed any kind of appeal.

Two years later, it appears the entire situation has blown up again for the Barnetts.

It's still unclear exactly how old the girl is. Based on the Ukrainian Birth Certificate that the Barnetts were originally given at adoption, she would be about 16 years old. But if the court system's decision to change her birth year was accurate, she would be around 30.

According to those court documents filed in Tippecanoe County back in September, the girl said she lived with the couple for two years after her adoption until they rented her an apartment, alone, and moved the rest of the family to Canada.

Those documents claim the Barnetts rented the apartment in Lafayette "because the child had no other contacts or affiliations in the county or surrounding area." And that the girl was alone between July 2013 and February 2016.

Those same court records describe medical records from Peyton Manning Children's Hospital that show the child was examined on June 3, 2010 and was estimated to be approximately eight years old. It also describes medical records from 2012 that show the girl had a "skeletal survey" completed at Peyton Manning CHildren's Hospital which estimated her to be approximately 11 years old.

It is unclear what impact the girl's form of dwarfism could have on those types of tests.

The documents filed against the Barnetts also claim they told the girl to "tell others that she looks young" but was actually 22, and they claim Michael admitted to knowing what the medical records said and that he believed the girl was a juvenile when she was left in Lafayette.

Right now, Michael and Kristine are both facing charges of neglect including endangering a dependent's life and abandoning or cruelly confining a dependent.

Michael's lawyers have filed a "motion to dismiss" the case based on inaccurate information.

The motion also claims a "law enforcement agent," who was believed to have been with the Tippecanoe County Sheriff's Office, was present and provided sworn testimony at the hearing in 2012 where a judge ruled that the adopted girl's age and birthday would be legally changed to reflect her adult status. He also claims the state attempted to open a "Child in Need of Services" case in May 2013, but the state ruled that they could not "meet its burden of demonstrating that (the girl) is a child under the age of 18..." and the case was dismissed.

Michael says the only thing he regrets about the entire situation is not thinking a little more on the circumstances before he and Kristine jumped to adopt the girl.

"My regret is thinking all with my heart, back at that time, and none with my mind and none with my head and not doing my due diligence. Not taking a step back and realizing... something is wrong, something is not correct here. My regret is not thinking through it and just leaping in and saying 'yes we want to open our home to this person who we have no information about and we're going to go on blind faith.'"

If the case is not dismissed, the jury trial is scheduled for January 28, 2020.

This story was originally published by Rafael Sánchez and Katie Cox at WRTV.