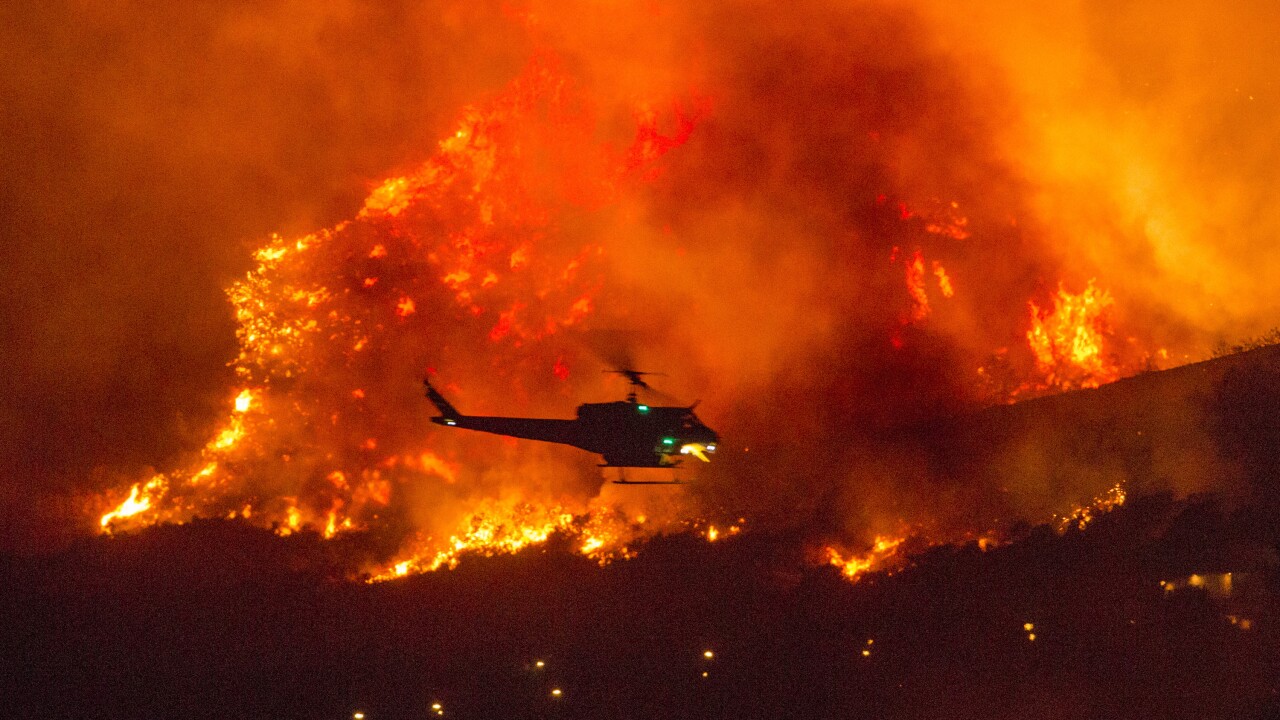 Copyright 2020 Associated Press. All rights reserved.
Ringo H.W. Chiu/AP
FILE - In this Saturday, Sept. 5, 2020, file photo, a helicopter prepares to drop water at a wildfire in Yucaipa, Calif. A couple’s plan to reveal their baby’s gender at a party went up in smoke Saturday at El Rancho Dorado Park in Yucaipa, when a pyrotechnical device they used sparked a wildfire that has burned thousands of acres. (AP Photo/Ringo H.W. Chiu, File)

A family who triggered a device at a gender reveal party that allegedly started a wildfire over the weekend in California could be held financially liable for the fire fight.

The El Dorado Fire was started Saturday morning in San Bernardino County in Southern California, it has burned more than 10,000 acres and is 16 percent contained as of Tuesday morning.

CAL FIRE says the fire was started when a smoke-generating pyrotechnic device was launched at a gender reveal party in a park. The press release from CAL FIRE reads, “Those responsible for starting fires due to negligence or illegal activity can be held financially and criminally responsible.”

A spokesman for California’s Department of Forestry and Fire Protection, also known as CAL FIRE, told The Daily Mail the family whose device started the El Dorado Fire could be liable for the entire bill for the destruction.

The couple was reportedly still at the park where the fire started when firefighters arrived.

“We know how it started because they were still there,” Bennet Milloy with CAL FIRE told The Daily Mail. “That, and the fact that there were surveillance cameras in the park.”

Milloy says they could face a variety of criminal charges, which could increase if homes and buildings are destroyed. In addition to the cost of putting the fire out, which could get into the millions of dollars.

This is not the first time a gender reveal party has started a wildfire.

In 2017, a couple’s party in Arizona sparked a fire that burned around 47,000 acres south of Tucson. The father, Dennis Dickey, who was then an off-duty US Border Patrol agent, was given probation and asked to pay for damages, roughly $8 million.

Dickey’s “reveal” was shooting a target with a high-powered rifle, resulting in an explosion of blue powder.

In April of this year, a gender reveal party led to ten acres burning in Florida.