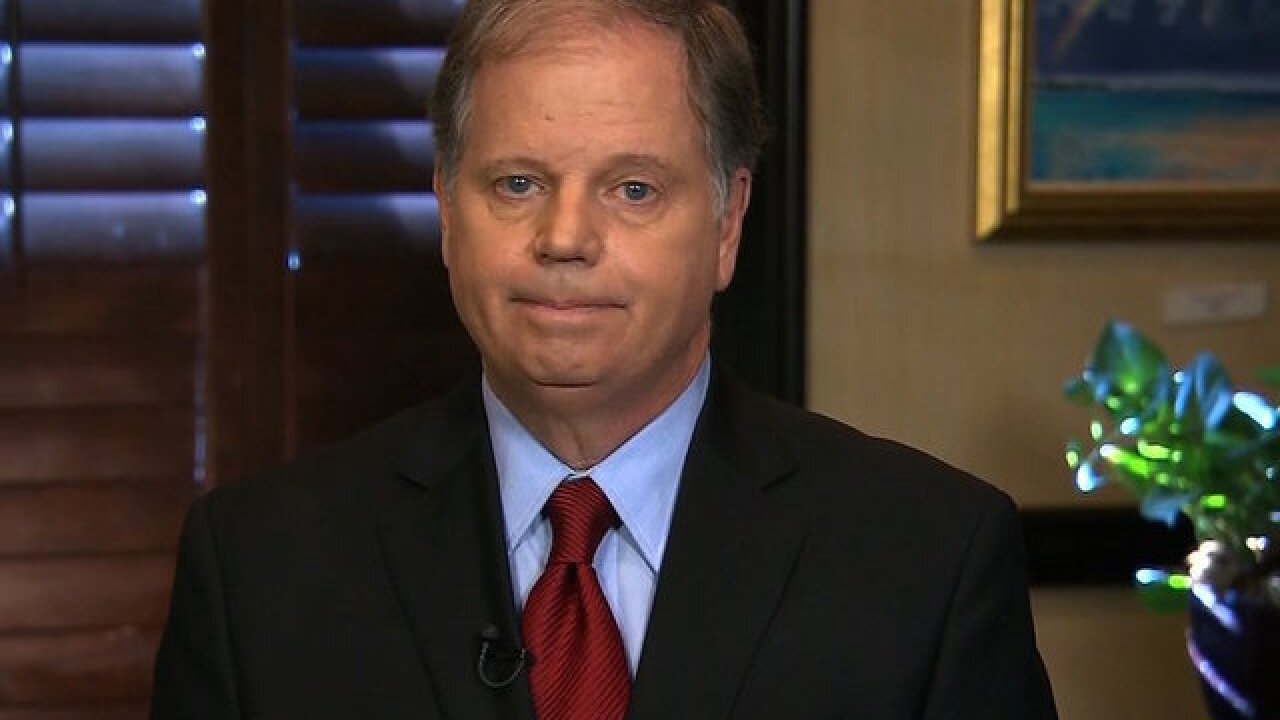 The winner of the Alabama special election, Democratic Senator-elect Doug Jones, says it's time to move on from the sexual misconduct allegations that have been made against President Donald Trump.

Jones told CNN's Jake Tapper on "State of the Union" Sunday morning that he doesn't agree with some in his party who say Trump should resign from office over the sexual harassment and sexual assault allegations against him, which Trump has denied.

"(T)hose allegations were made before the election, and so people had an opportunity to judge before that election," Jones said.

Jones also said that he's ready to move forward despite Roy Moore's refusal to concede the race, stating he's "ready to go regardless of whether (Moore) concedes or not."

"I say it's time to move on. Alabama has spoken," Jones added. "It was a close election, there is no question about that. But, you know, elections can be close sometimes. But now it's time to heal."

Jones is the first Democrat in a generation to win a Senate seat in Alabama, beating Moore amid a firestorm of allegations that the Republican candidate had sexually abused teenagers, claims which Moore has continually denied.

On Saturday, Moore's campaign sent out a fundraising email that appeared to bring the integrity of the election into question.

"This race is not over until the numerous reports of fraud have been investigated, all votes have been counted and the Alabama Secretary of State officially certifies the results," the email states. The campaign did not offer any evidence of irregularities in the email.

On Thursday, Moore released a video saying he will not concede the election until the Alabama secretary of state certifies the election, which is scheduled to happen no earlier than December 26 and no later than January 3.

The secretary of state, John Merrill, has said it is "highly unlikely" that Jones would not be certified as the winner of the election.

Working across the aisle, Trump allegations

When asked by "State of the Union" anchor Jake Tapper about National Republican Senatorial Committee Chairman Cory Gardner's statement Tuesday urging Jones to vote with the GOP, Jones said he's considering working with the Republican Party on some issues, including infrastructure.

"(O)ne of the problems in American politics right now, in my opinion, is that everybody thinks, because you're a member of one party or another, you're going to vote a certain way," Jones said. "And that should not be the case. I'm going to talk to people on both sides of the aisle, try to figure out what I think is in the best interests of my state and in the country. Now, don't expect me to vote solidly for Republicans or Democrats."

But Jones would not side with some Democratic senators, such as Kirsten Gillibrand of New York and Cory Booker of New Jersey, who have called for Trump to resign over the allegations against him.

"Let's get on with the real issues that are facing people of this country right now, and I don't think that the President ought to resign at this point," Jones said. "We will see how things go. But, certainly, those allegations are not new, and he was elected with those allegations at front and center."

Jones also said he agrees with former NBA player Charles Barkley, who said Democrats take the African-American and the "poor vote" for granted, adding that Jones' victory is "a wake-up call for Democrats."

"I think it's time that we start looking around," Jones said. "Alabama is a very diverse state."

This article has been updated.