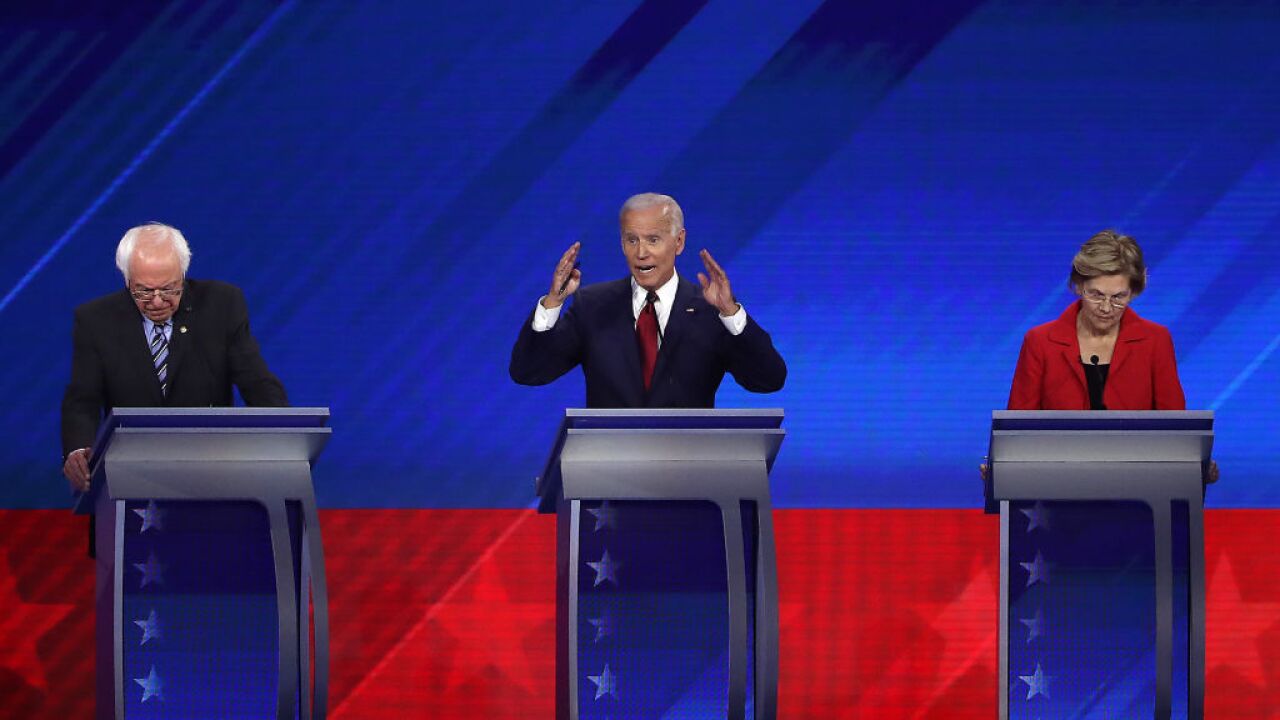 WESTERVILLE, Ohio - One stage. Twelve candidates. Tuesday’s CNN/New York Times Democratic Party Debate will feature the most candidates at any one time for a televised presidential debate in recent memory.

Democratic party leaders said they’re hopeful having the debate on one night, even with a large number of candidates, will mean better viewership. It also means that 12 candidates will divvy up three hours of time, although in past debates, the higher polling candidates generally received more talk time. Joe Biden has led the talk time in all three debates held so far this year.

Candidates qualifying for the debate received at least 2 percent in four national or early primary state polls and raised money from 130,000 unique donors.

Among the candidates who did not qualify for this month’s debate are Rep. Tim Ryan, Gov. Steve Bullock, author Marianne Williamson, Sen. Michael Bennet and Rep. John Delaney.

And the road to qualifying for future debates will become even more challenging for lower and mid-tier candidates. The fundraising threshold for November’s debate will increase to 165,000 unique donors, and candidates will need to hit 3 percent nationally and/or 5 percent in early states in four different recognized polls.

There has a rather significant shift in polling since the last debate on Sept. 12. Then, Biden was a clear frontrunner in the Democratic Party. Now, his lead has practically vanished in several national polls. A Quinnipiac University poll has Warren now leading Biden 30-27. But in a Fox News poll released last week, Biden leads 32-22. A recent CBS poll showed a tied race in Iowa, and Warren leading 32-24 in New Hampshire.

Sanders has consistently stayed in third place in the polls in recent weeks. Buttigieg has gone into fourth place in many polls as Harris has seen a steady drop in support after she saw a spike following the first debate.

Although he has not been on the campaign trail in the last two weeks, Sanders plans on being on stage for three hours on Tuesday night after he had a heart attack in Las Vegas. Sanders is expected to resume campaign activities on Saturday.

Impeachment as a topic

Tuesday’s debate marks the first since House Democrats announced a formal impeachment inquiry into President Donald Trump’s phone call with Ukraine’s president requesting an investigation into the Biden family. Democrats, and even a handful of GOP leaders including Utah Sen. Mitt Romney, say the phone call was inappropriate.

Biden will likely get the opportunity to address whether how he handled his relationship with Ukraine was appropriate given that his son was working for a Ukrainian company under investigation by that country’s government.

Other candidates have focused their attacks on Trump’s conduct rather than Biden’s. Could that change at Tuesday’s debate?

Also, whether the moderators will delve into Trump’s impeachment remains to be seen. An impeachment inquiry will be a moot point in 2021 if one of the candidates on stage becomes president.

The United States’ role in the Middle East could get a lot of airplay on Tuesday, especially given that American troops are withdrawing from Syria. This decision by the Trump administration has drawn ire from Democrats and a number of Republicans. The U.S. leaving Syria has left Kurdish fighters vulnerable to attack from the Turkish military.

Kurdish fighters were holding 11,000 Islamic State group prisoners on the United States’ behalf, according to the New York Times. On Monday, Trump tweeted that he believed that the Kurds were intentionally releasing prisoners to draw the U.S. back into the conflict.

While the landscape of the Middle East could be altered by 2021 given recent events, candidates should be expected to expound on their views of Middle East policy, and whether the U.S. should keep troops permanently in the region.