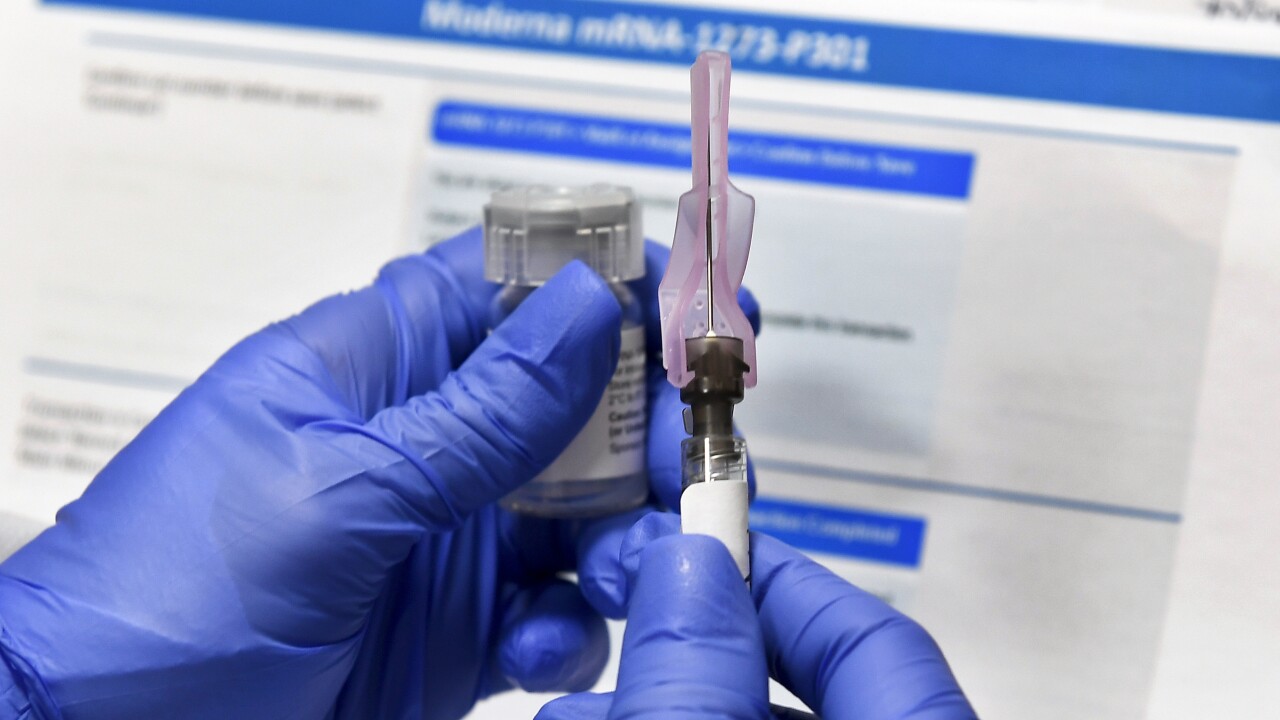 Copyright 2020 The Associated Press. All rights reserved
Hans Pennink/AP
FILE - In this Monday, July 27, 2020 file photo, a nurse prepares a shot as a study of a possible COVID-19 vaccine, developed by the National Institutes of Health and Moderna Inc., gets underway in Binghamton, N.Y. Who gets to be first in line for a COVID-19 vaccine? U.S. health authorities hope by late next month to have some draft guidance on how to ration initial doses, but it’s a vexing decision. (AP Photo/Hans Pennink)

CAMBRIDGE, Mass. – The U.S. government will pay Moderna Inc. up to $1.525 billion to secure 100 million doses of the company’s COVID-19 vaccine candidate.

HHS says Moderna will manufacture the vaccine doses while clinical trials are still underway to expedite the traditional development timeline and get vaccines to the public as soon as possible.

The Trump administration hopes to deliver the vaccines by the end of the year, so long as the U.S. Food and Drug Administration (FDA) authorizes their use.

“In creating a vaccine portfolio for Operation Warp Speed, the Trump Administration is increasing the likelihood that the United States will have at least one safe, effective vaccine by 2021,” said HHS Secretary Alex Azar. “Today’s investment represents the next step in supporting this vaccine candidate all the way from early development by Moderna and the National Institutes of Health, through clinical trials, and now large-scale manufacturing, with the potential to bring hundreds of millions of safe and effective doses to the American people.”

HHS says the vaccine doses will be delivered to government-designated locations across the country and the U.S. could acquire up to an additional 400 million doses of the vaccine.

If viable, the vaccines would be available to the American people at no cost, according to HHS. Healthcare professionals could charge for the cost of administering the vaccine, though.

The vaccine, called mRNA-1273, has been co-developed by Moderna and scientists from the National Institute of Allergy and Infectious Diseases (NIAID), part of the National Institutes of Health. The third phase of the vaccine trial, which began July 27, is the first government-funded Phase 3 clinical trial for a COVID-19 vaccine in the nation, according to HHS.

“We appreciate the confidence of the U.S. government in our mRNA vaccine platform and the continued support,” said Stéphane Bancel, Moderna’s Chief Executive Officer. “We are advancing the clinical development of mRNA-1273 with the ongoing Phase 3 study being conducted in collaboration with NIAID and BARDA. In parallel, we are scaling up our manufacturing capability with our strategic partners, Lonza, Catalent and Rovi, to address this global health emergency with a safe and effective vaccine.”