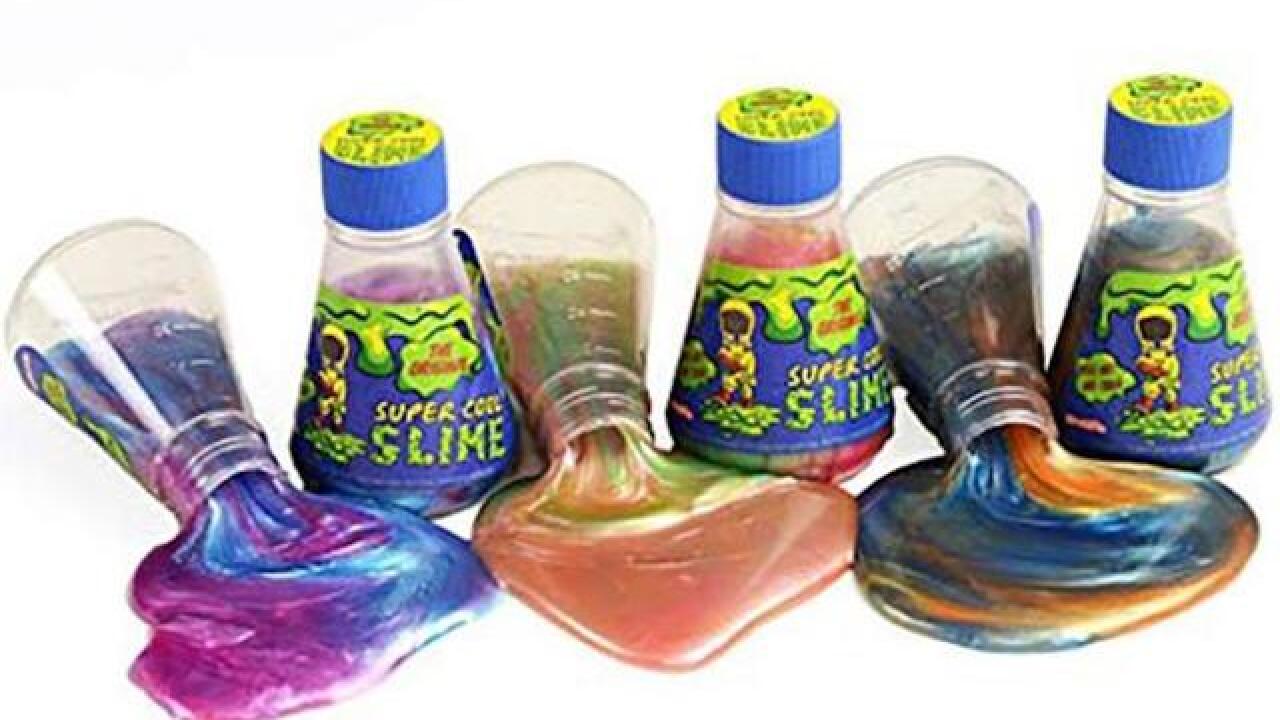 A consumer advocacy group is warning parents of what it calls "dangerously high" levels of a chemical called boron in popular slime toys marketed to children -- although an expert disputed the findings and said the warning is overblown.

The warning was contained in the annual report by the US Public Interest Research Group Education Fund. The "Trouble in Toyland" safety survey was published Tuesday ahead of the major holiday shopping season.

The group noted "toys are safer than ever before," but that more work needs to be done to make them safer. PIRG's report highlighted the potential hazards of slime, toys with possible choking hazards and ones that could violate children's privacy by sharing data.

"With hundreds of new toys hitting the market every year, our survey of only 40 toys suggests there may be other potentially dangerous toys slipping through existing protections or worthy of further investigation," the group said.

The group singled out six popular slime products for what it described as containing "dangerously high boron content." Boron is a nonmetallic element, and compounds of it, such as borax, have been used in products for decades, ranging from detergents to roach poison. The US PIRG Education Fund said it found that "significant concentrations of boron, as high as 4,700 parts per million (ppm) in popular slime toys."

"Young kids are known to put everything in their mouths and when it comes to slime that could have serious consequences," said Adam Garber, the lead author of the report. "These high levels of boron can cause nausea, vomiting and long term reproductive health issues. Parents should closely monitor their kids when playing with this toy and call poison control if any is eaten."

Garber added, "We should protect children by ensuring every package has appropriate labels moving forward and determine health-based standards to ensure children don't end up in the emergency room from their holiday gift."

The United States does not have established standards on limits for boron in products. The Centers for Disease Control and Prevention says exposure to large amounts of boron -- about 30 grams of boric acid -- "over short periods of time can affect the stomach, intestines, liver, kidney, and brain and can eventually lead to death." Fatal doses for children are estimated to be 5 to 6 grams, according to the Environmental Protection Agency.

PIRG noted the European Union has a limit of 300 ppm for boron and that there should be a "full-fledged investigation to determine if limits should be established" in the US. "Policymakers should continue to evaluate new threats, such as boron, and ensure the Consumer Product Safety Commission has the funding and authority to protect the public," the report said.

However, Rick Sachleben, a member of the American Chemical Society who has experience with boron, said it's important to distinguish the fact that "all forms of boron are not equally toxic." He said sodium borate, the known component used in slime, has "very low toxicity."

"You'd almost have to do something beyond reason to make it toxic," he said, adding that a child would need to eat "multiple containers" before it reached toxic levels.

"The health risks are relatively low and can be controlled by telling your kid: 'If you eat the slime, I'm not going to buy you any more," Sachleben said.

Sachleben wasn't the only one to take issue with the PIRG report.

Wonder Workshop CEO Vikas Gupta told CNN that information about his company's product in the report was categorically false. The PIRG report, citing an investigation by the Mozilla Foundation, said Wonder Workshop's Dash robot "shares your information with third parties."

"That is absolutely incorrect," Gupta said. "We don't collect any personal identifiable information from children, and we do not share any information from the apps or the software or robots to any third-party ever. None of that happens."

Amazon, which had its Amazon Fire HD Kids Edition cited for its possible sharing of data, said the product is in full compliance with the Children's Online Privacy Protection Act. "We do not share children's data with third parties," Amazon said in a written statement.

The report also said another popular toy -- the Hatchimals Fabula Forest; Hatching Egg with Interactive Tigrette -- had "no choking hazard label" in its listing on Walmart.com, although the photograph of the product has a choking warning on the front of the box.

Garber said that wasn't good enough, that the "law requires online sites to provide warning labels directly on the site, not just on pictures or on the packaging, so parents are warned prior to purchase."

According to PIRG, the Consumer Product Safety Commission has recalled more than 40 children's products in the last year, totaling more than 2.7 million units.

Balloons cause more choking deaths among children than any other toy, according to the PIRG report. The group found three balloon packages that are either marketed to young children or are not labeled properly with choking hazard warnings.

The six slime products mentioned in the report were:

-- Kidsco Glow in The Dark Slime with "4600 ppm boron concentration."

Garber said 5 grams of boron could prove fatal for a child, although "health impacts with boron appear at much lower levels" than that. He acknowledged "you'd likely have to ingest multiple containers to reach the fatal level" of boron, but he doesn't believe that should be the standard.

"After talking to a number of public health experts on this issue," Garber said, "they agreed that these levels warranted a warning and further investigation on setting standards."

CNN reached out to the makers of the slime products but did not hear back. The chemist, Sachleben, said he wasn't too concerned. "I wouldn't put this high on my priority of things to worry about," he said.