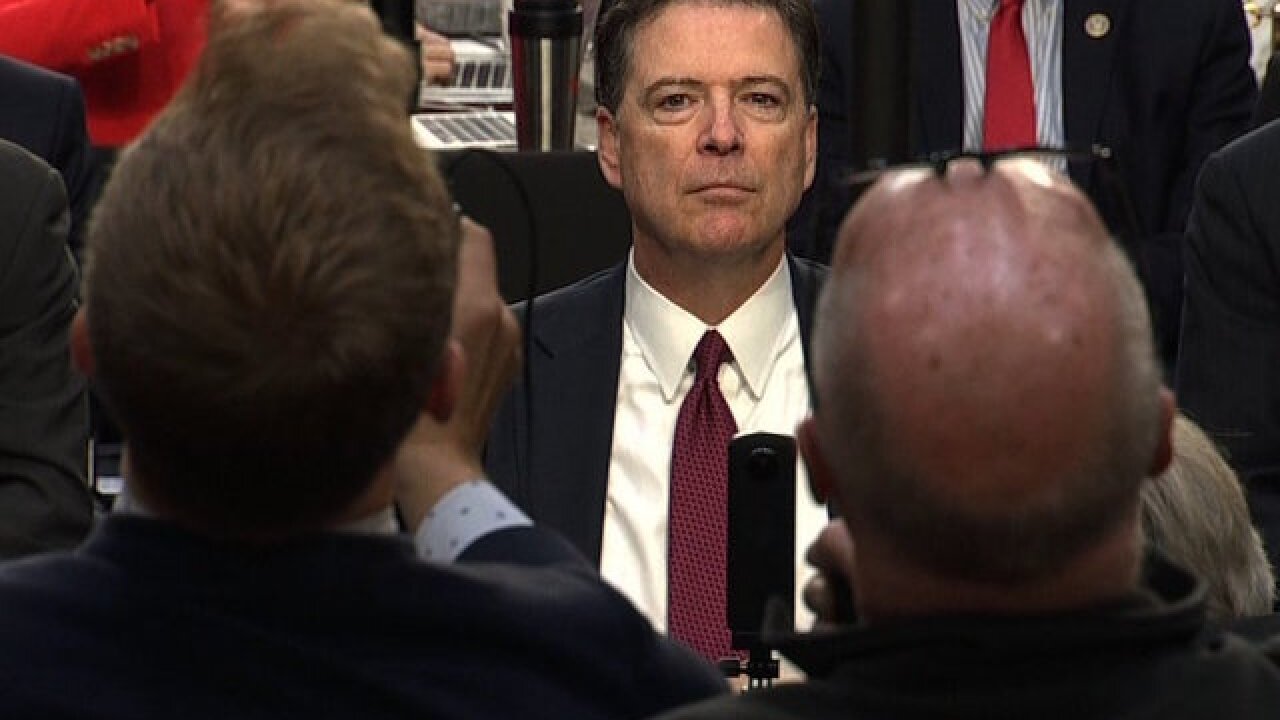 Former FBI Director James Comey said President Donald Trump told him numerous times that he was "doing a great job" in that position before he was fired.

Comey gave that answer as part of his testimony before the U.S. Senate on Thursday. Comey was answering questions related to his investigation into Trump's campaign and its alleged ties to Russia.

During the testimony, Comey said he had "no doubt" that Russia was behind some tampering during the 2016 election. He called Russia's interference in the election a "hostile act."

He also said he believes he was fired because of his probe into Trump's alleged Russian ties.

Regarding Russia's meddling in the 2016 presidential election, Comey agreed with Senate committee member Sen. Angus King (I-Maine), who said, "I don't think [Russian President Vladimir] Putin is a Republican or a Democrat. He's an opportunist."

Comey also said he thinks the Russians will continue trying to intervene in future U.S. elections.

The panel questioning Comey is made up of 15 Senators and is led by Richard Burr (R-N.C.) and Mark Warner (D-Va.). Other notable members of the panel include Marco Rubio (R-Fla.), Tom Cotton (R-Ark.) and Dianne Feinstein (D-Calif.).

It's been alleged that Trump tried to influence Comey's FBI probe into the Trump-Russia connections. Trump and Comey had several private meetings that were documented by Comey on paper in the months following Trump's election.

Comey said it was strange Trump insisted on having one-on-one meetings with him, clearing everyone else out of the Oval Office before speaking with him on one instance.

When asked about keeping documents on those meetings, Comey told the Senate committee he did so because he had a "gut feeling" that one day he may need to defend himself and the FBI. He also said, "Lordy, I hope there are tapes" of the meeting.

Regarding his notes on those meetings with Trump, Comey said he turned them over to Mueller to aid in his ongoing investigation.

Comey also said no one specifically asked him to drop the Russia investigation, but that he felt Trump wanted it dropped when he casually told Comey in private, "I hope you let this go."

Comey said he felt that statement was more than a passing remark and was instead a suggestion.

When asked by King who initiated the one-on-one meetings between the pair, Comey said Trump set them up every time. He said Trump called him at his FBI office and asked him to join him for dinner, forcing Comey to break a date with his wife for that evening. Trump has said previously in an interview that Comey is the one who requested dinner with the president.

Comey told the panel that, at one point, Trump asked him to pledge his "loyalty." He described the meeting as "very awkward" because Trump was asking for something Comey would not give him.

When questioned by Feinstein on that meeting, Comey said perhaps if he were "stronger," he would have stopped the president from questioning him regarding the Russia investigation. He said he was "stunned" by Trump's questions.

During his testimony, Comey was highly complimentary of Robert Mueller, the former FBI director who was appointed by the Justice Department as special counsel overseeing the Russia investigation following Comey's dismissal.

"Mueller is one of the best public servants this country has ever produced," Comey said, adding that he felt Mueller's investigation will be dogged and as thorough as possible.

Comey said he always knew he could be fired at any time but said he was "confused" by the reasons Trump gave to the media for his ouster. He said he believed Trump and others in his administration chose to defame him following his firing.

He said Trump lied to the American people when he said the FBI was in disarray under Comey's leadership. "Those were lies, plain and simple," Comey said.

Comey also thanked his former colleagues at the FBI, saying he regretted not having a chance to say a public goodbye to them after his firing.