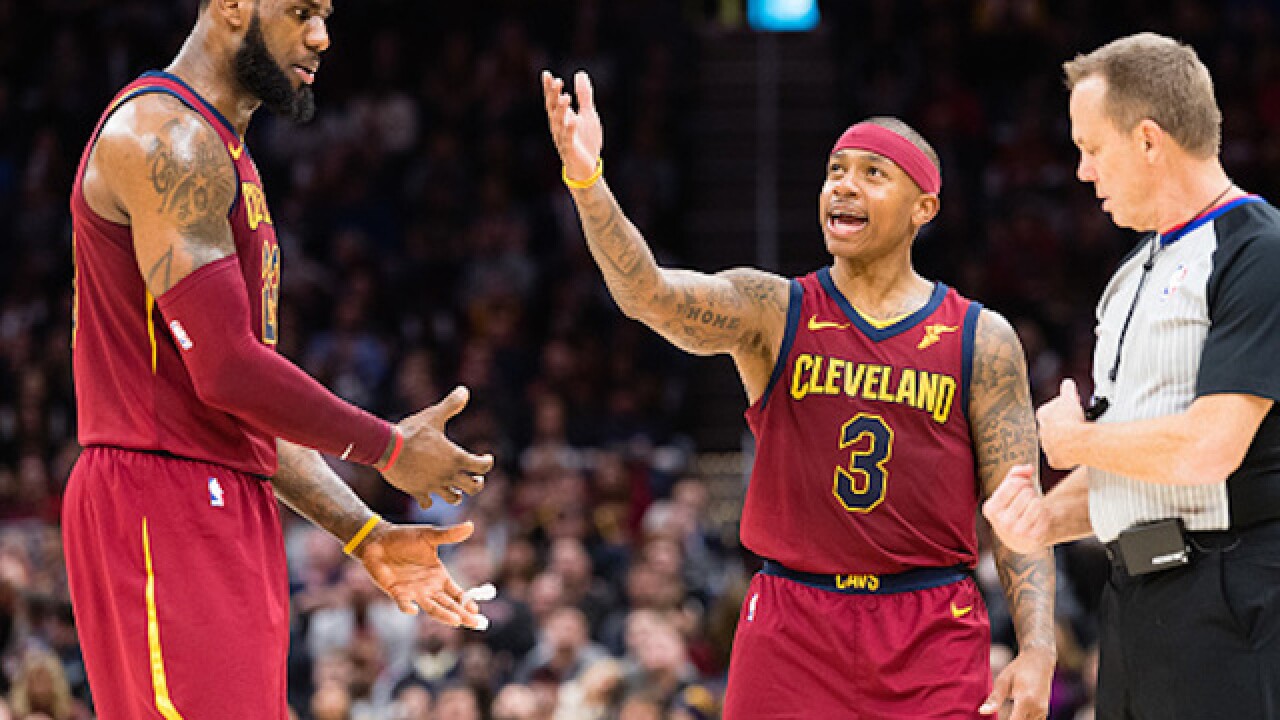 Copyright 2018 Scripps Media, Inc. All rights reserved. This material may not be published, broadcast, rewritten, or redistributed.
Jason Miller
<p>CLEVELAND, OH - JANUARY 2: LeBron James #23 an Isaiah Thomas #3 of the Cleveland Cavaliers argue a call with referee Bill Spooner #22 during the second half against the Portland Trail Blazers at Quicken Loans Arena on January 2, 2018 in Cleveland, Ohio. The Cavaliers defeated the Trail Blazers 127-110. NOTE TO USER: User expressly acknowledges and agrees that, by downloading and or using this photograph, User is consenting to the terms and conditions of the Getty Images License Agreement. (Photo by Jason Miller/Getty Images)</p>

LeBron James has a lot of new teammates.

In a series of shocking trades, the Cleveland Cavaliers traded half of its roster in about the span of an hour just before the NBA's trade deadline.

According to Scripps station WEWS in Cleveland, the Cavaliers conducted five transactions just hours before the deadline:

Thomas arrived in Cleveland earlier this season via a controversial trade that sent Cavalier PG Kyrie Irving to Boston. Thomas played in just 15 games for the Cavaliers this season after battling a hip injury,

The Cavaliers, who have been to the NBA Finals in each of the past three seasons, have underperformed so far this season and currently sit in third place in the Eastern Conference. Reports indicate that locker room morale has plummeted, especially since Thomas returned from injury in January.

Wade's wife, Gabrielle Union thanked fans in Cleveland for making their family feel welcomed while they were in town.

Huge thank you to the fans in Cleveland for treating our family like family! Always love and gratitude

Over the years, Channing Frye became a fan favorite in Cleveland and was part of the team's 2016 championship win.

Reacting to the news and thanking fans on social media, Frye said: "Don't go 0-6 or they're going to trade your ass."

Channing Frye reacts to his trade: "Don't go 0-6 or they're going to trade your ass." pic.twitter.com/Ttqit6KEgl

It's no secret the special bond between LeBron James and Wade. On Instagram, James said he will miss his brother. "It's how it's supposed to be," he said.

Truly happy for my brother @dwyanewade!! It’s how it’s suppose to be. Love you my guy!! #WadeCountyBack⚡️