CDC's handling of polio-like illness criticized by its own advisers 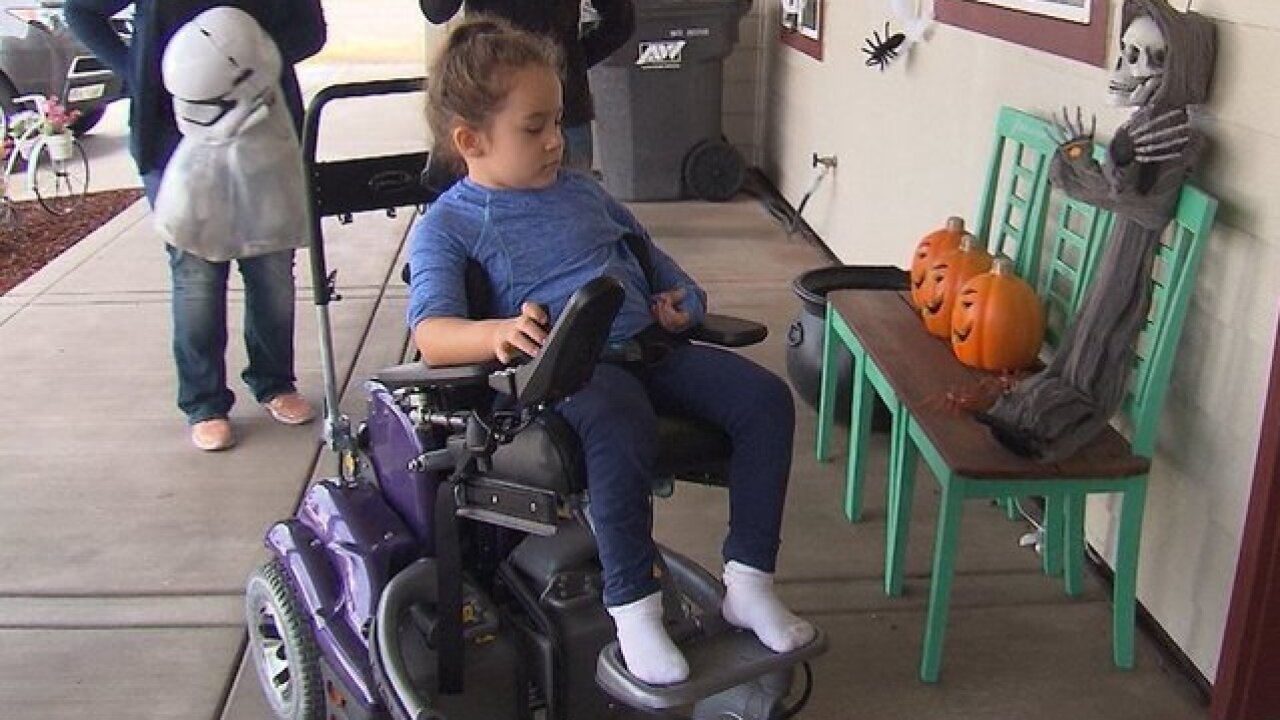 © 2018 Cable News Network, Inc.
CNN
<p>LeMay Axton said it happened to her granddaughter, Cambria Tate, when she was 2 years old. Now 4, she gets around in a wheelchair, or by scooting around on the floor.</p>

The Centers for Disease Control and Prevention's own medical advisers are criticizing the federal health agency for being slow to respond to a polio-like disease that's struck hundreds of children over the past six years.

"Frustrated and disappointed -- I think that's exactly how most of us feel," said Dr. Keith Van Haren, one of the CDC advisers on AFM and an assistant professor of neurology at the Stanford University School of Medicine.

Van Haren and other doctors who care for these children say the agency has been slow to gather data and to guide pediatricians and emergency room physicians on how to diagnose and treat the children struck with the disease, acute flaccid myelitis.

"This is the CDC's job. This is what they're supposed to do well. And it's a source of frustration to many of us that they're apparently not doing these things," said Dr. Kenneth Tyler, a professor and chair of the department of neurology at the University of Colorado School of Medicine and another adviser to the CDC on AFM.

At a press briefing this month, a CDC doctor said the agency was working hard to find the cause of the outbreaks.

"We continue to investigate to better understand the clinical picture of AFM cases, risk factors and possible causes of the increase in cases," said Dr. Nancy Messonnier, director of CDC's National Center for Immunization and Respiratory Diseases.

She said the agency could do a better job getting the message out about the signs of AFM.

"We're obviously not doing a good enough job because it's not getting to every place that we want it to, so we need to work harder," she told CNN in an interview.

According to the CDC, since 2014, there have been 396 confirmed cases of acute flaccid myelitis, which resembles polio and causes paralysis in children.

This year, there have been 72 confirmed cases of AFM, and another 119 possible cases are being investigated, according to the agency.

'They need to get busy'

The doctors aren't the only ones who are critical of the CDC's handling of the devastating disease.

On Saturday, five families whose children have AFM gathered at the home of 10-year-old McKenzie Andersen in Albany, Oregon, to celebrate an early Halloween. On the actual holiday, McKenzie will be having surgery related to a complication of the disease.

McKenzie was a happy, healthy, hip-hop-dancing first-grader when she developed pneumonia in 2014. Within four days, she was paralyzed below the neck.

Today, she can move only her left hand and her feet and toes. She spends nearly all her time in bed, a ventilator breathing for her.

As the families munched on Halloween treats at McKenzie's home, they talked about their disappointment in the CDC. The mothers say the federal agency should be doing a better job letting emergency rooms know about the signs of AFM.

The women, who help run a Facebook group for hundreds of parents whose children have the disease, say that even today, six years after the first set of cases, emergency rooms still frequently send children home when they have signs of AFM, attributing the paralysis to a pinched nerve or some other cause.

LeMay Axton said it happened to her granddaughter, Cambria Tate, when she was 2 years old. Now 4, she gets around in a wheelchair, or by scooting around on the floor.

She said she'll always wonder whether Cambria would have more mobility if her AFM had been caught sooner. She wonders why it wasn't, given that Cambria got sick in 2016, four years after the first cluster of cases of AFM.

She said the CDC should be reaching out to hospitals with specific instructions about the signs of AFM, such as weak limbs and a drooping face, and what to do about it.

In 2014, in 2016 and again this year, the CDC provided state health departments with an example of a letter they could send to health care providers describing the symptoms of AFM.

The federal agency also sent information about AFM to more than 6,000 professionals at local, state and federal agencies. State employees were also given directions on how to send laboratory specimens to the CDC for testing.

The parents in the Facebook group also criticized the CDC for being out of touch with them and other families affected by AFM.

The parents say they've gathered data on hundreds of children with the disease and have offered to share it with the CDC, but when they've reached out to the agency, they receive a form letter thanking them for their interest.

"For other diseases that I work on, we definitely engage directly with the advocacy groups," she said. "I guess I didn't know about this particular Facebook group."

CNN interviewed four doctors who serve as medical advisers to the CDC on AFM who shared the mothers' concerns and have several other concerns of their own.

The physicians want it to be required that cases of AFM be reported to the CDC, as is required for many other illnesses.

"To get to the bottom of causation, we've got to start with a simple accounting of how many cases there are," said Dr. Benjamin Greenberg, associate professor of neurology at UT Southwestern Medical Center in Dallas. "We don't know how many cases are out there, and that's just wrong."

Messonnier said that such required reporting is being considered but that the Council of State and Territorial Epidemiologists makes that decision, not the CDC.

Twice, once in 2015 and once in 2017, that group decided that AFM did not need to be nationally reported. The CDC concurred.

The CDC advisers interviewed by CNN say the agency has been slow to narrow in on enterovirus as the most likely culprit for AFM and instead has continued to seriously consider other causes.

"This is a mystery so far, and we haven't solved it yet, so we have to be thinking broadly," Messonnier said at the press briefing this month.

But the four medical advisers said it's reasonable to focus in on enteroviruses. First, the clusters of cases have occurred during enterovirus season, which is late summer and fall. Second, many of the children had symptoms of an enterovirus infection. Third, many patients have tested positive for an enterovirus, and these advisers think more patients had the virus but weren't tested for it, or the test was done too late to pick it up. Fourth, when scientists infect mice with a particular enterovirus, the animals developed paralysis.

If the CDC focused on enteroviruses, it could lead more quickly to a treatment or a vaccine, according to the medical advisers interviewed by CNN.

"The CDC really seems to be out of sync with the conclusions that most scientists are coming to. We feel like we're not being listened to," said Van Haren, the Stanford researcher. "We don't understand how the CDC has arrived at the place where they're at."

Messonnier said that although enteroviruses can cause AFM, it's not clear that they're conclusively the main culprit. What gives doubt, she said, is that the virus has not been found in patients' cerebrospinal fluid.

"AFM is a destructive disease of the neurological system. If this virus was causing this damage, we'd expect to be able to find the virus in the spinal fluid of most of these patients, and we're not," she told CNN. "We cannot explain these three peaks of disease in [2014, 2016 and 2018] by enterovirus, and so the way that sort of any discriminating scientist would do, we're trying to think more broadly and make sure that we're not missing something."

But according to the CDC, the detection of poliovirus in the cerebrospinal fluid of patients is "uncommon." The doctors interviewed by CNN think enterovirus might follow that same pattern.

The CDC advisers also said they wished the agency were doing more to coordinate efforts around the country to find the best treatment for children with AFM. While some hospitals share their treatment outcomes with one another, there's no systematic, national method for doing so.

"We're trying to systematically collect our data so we can get smarter over time," said Greenberg, the pediatric neurologist in Dallas. "We're looking for public health officials to help us out here."

The CDC plans to meet next week with medical experts to discuss treatment considerations, Messonnier said.

The agency's medical advisers say they hope the meeting will bring about change.

The four advising doctors said they hope the CDC will make changes soon, including the encouragement of mandatory reporting, recognition that enterovirus is the likely cause of AFM and better collection of data.

"Physicians are on the front line, and what we're seeing is really heartbreaking: Children are healthy one day and really profoundly disabled in some cases the next," Van Haren said. "That's what frustrates and disappoints and saddens so many of us."