President Trump: 'DeVos is a reformer!' 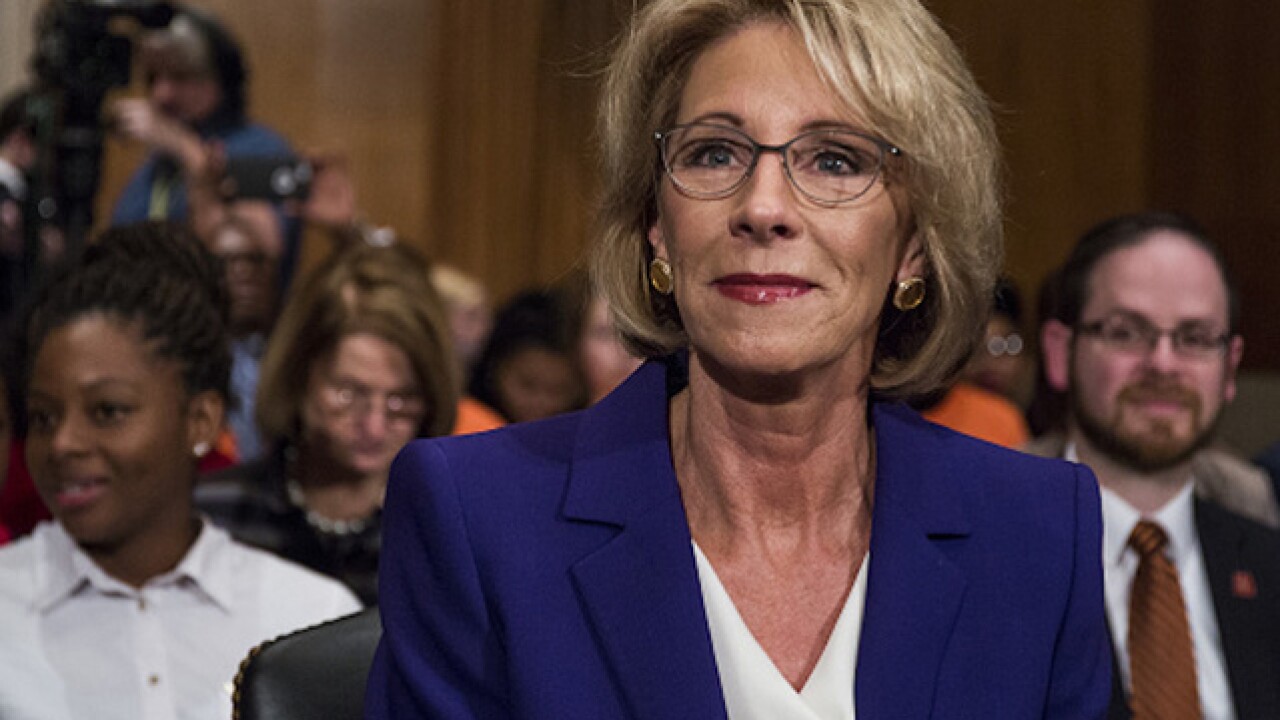 WASHINGTON (AP) — Education Secretary Betsy DeVos vowed to be a "tireless advocate for all students" after being confirmed for the job by the slimmest possible margin in a culmination of an unusually contentious nomination fight.

With two Republicans joining Democrats in a marathon effort to oppose the wealthy Republican donor, it took Vice President Mike Pence to break a 50-50 tie by casting the deciding vote Tuesday.

Despite the win, DeVos, who spent more than two decades promoting charter schools and school voucher programs, faces an uphill battle in mending fences with educators across the country after a bitter confirmation process. Opposed by half the Senate, she faced criticism for her antipathy toward public schools, even ridicule for lack of experience and confusion during her confirmation hearing.

President Donald Trump accused Democrats of seeking to torpedo education progress. In a tweet before the vote, he wrote, "Betsy DeVos is a reformer, and she is going to be a great Education Sec. for our kids!"

DeVos was sworn in hours after the Senate vote by Pence, who told the new Cabinet member: "I wasn't just voting for you. Having seen your devotion to improving the quality of education for some of our most vulnerable children across the nation for so many years, I was also casting a vote for America's children."

"I can tell you, my vote for Betsy DeVos was the easiest vote I ever cast," Pence said.

DeVos released a statement promising to champion the interests of all students. "Partnering with students, parents, educators, state and local leaders, Congress and all stakeholders, we will improve education options and outcomes across America," she said.

She now takes the helm of a department charged with implementing laws affecting the nation's public schools with no direct experience with traditional public schools. Her opponents noted that she has no experience running public schools, nor has she attended one or sent her four children to one.

DeVos also will have to address several hot-button issues in higher education, such as rising tuition costs, growing student debt and the troubled for-profit colleges, many of which have closed down, leaving students with huge loans and without a good education or job prospects.

Close attention also will be paid to how DeVos deals with sexual assault, freedom of speech on campuses and LGBT rights.

Ahead of Tuesday's vote, emotions ran high as constituents jammed senators' phone lines. Protesters gathered outside the Capitol, including one person in a grizzly bear costume to poke fun at DeVos. At one point during her nomination fight, she said some schools should have guns because of the threat of grizzly bears.

Democrats and labor unions vigorously fought the nomination, suggesting that DeVos would defund traditional public schools by diverting taxpayers' money to charter and private institutions. They cited her financial interest in organizations pushing for charter schools, though she has said she will divest those interests.

"It's telling that even when Trump had full control of the legislative and executive branches, he could only get DeVos confirmed by an unprecedented tiebreaking vote by his vice president," said Randi Weingarten, president of the American Federation of Teachers. "That's because DeVos shows an antipathy for public schools; a full-throttled embrace of private, for-profit alternatives; and a lack of basic understanding of what children need to succeed in school."

DeVos supporters, however, saw her confirmation as an occasion to breathe new life into a troubled American school system and a chance to shift power from Washington to the local level.

"She has been a leader in the movement for public charter schools — the most successful reform of public education during the last 30 years," said Sen. Lamar Alexander, the chairman of the Education Committee. "And she has worked tirelessly to help low-income children have more choices of better schools."