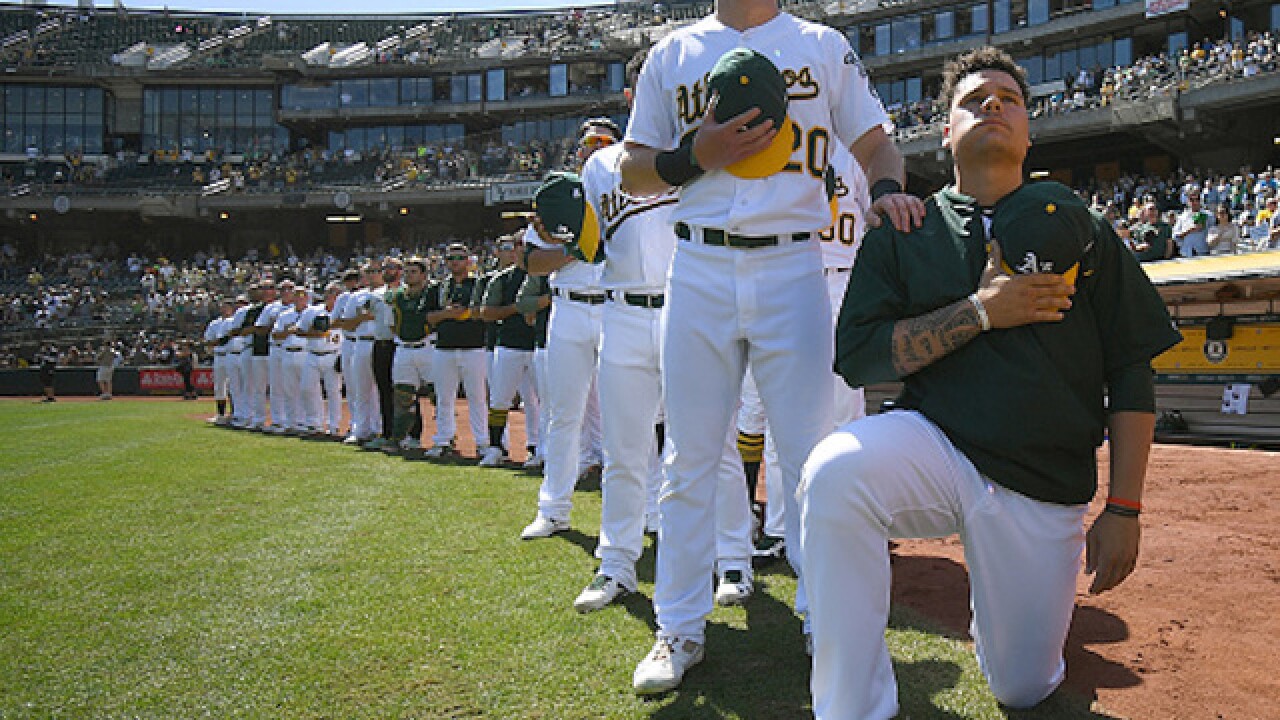 Copyright 2017 Scripps Media, Inc. All rights reserved. This material may not be published, broadcast, rewritten, or redistributed.
Thearon W. Henderson
<p>OAKLAND, CA - SEPTEMBER 24: Bruce Maxwell #13 of the Oakland Athletics kneels in protest next to teammate Mark Canha #20 duing the singing of the National Anthem prior to the start of the game against the Texas Rangers at Oakland Alameda Coliseum on September 24, 2017 in Oakland, California. (Photo by Thearon W. Henderson/Getty Images)</p>

Oakland Athletics catcher Bruce Maxwell, believed to be the only Major League Baseball player to kneel during the national anthem this season, says he was refused service at a restaurant in his Alabama hometown because of his politics.

Maxwell, a black man who grew up in a military family, told TMZ Sports he returned to his hometown of Huntsville, Alabama for the offseason and he “wasn't even home four hours” when a waiter could not serve him because of his protest.

"And so he denied us service at lunch, and they had to go get us another waiter to wait on our table at that same restaurant. … “ Maxwell told TMZ . “He goes, 'I voted for Trump … and I stand for everything he stands for.'”

Maxwell says he was having lunch with a high school friend, who happens to be a city councilman, was also initially denied service. The two eventually spoke to a manager, who sat them in a different section with a different server.

“This all started because I carded his friend who wanted to order a beer.”

“He asked me, don’t you know who Bruce Maxwell is, and told me I was making everyone feel uncomfortable," Henry added to Fox News. "Nobody was even paying attention to them,” Henry claimed. “I didn’t know anything about him or the kneeling. All I know is a friend of mine 15 years ago lost his job for serving someone a drink who happened to be underage, so if anyone looks under 30, I’m going to card them.”

Maxwell made headlines in September when he took a knee for the anthem Sept. 23, the day after a Trump rally in Huntsville in which U.S. President Donald Trump called players who knelt for the “Star-Spangled Banner” “sons of b*****s” and suggested they be fired.

Maxwell continued his protest through the end of the A's season.

“Our president speaks of inequality of man because players are protesting the anthem! Seriously on the highest platform for our country expressing that it is OK for there to be Division of man and rights!” Maxwell wrote on Instagram the day of his protest.

Yeah forget this guy! Our president speaks of inequality of man because players are protesting the anthem! Seriously on the highest platform for our country expressing that it is OK for there to be Division of man and rights!