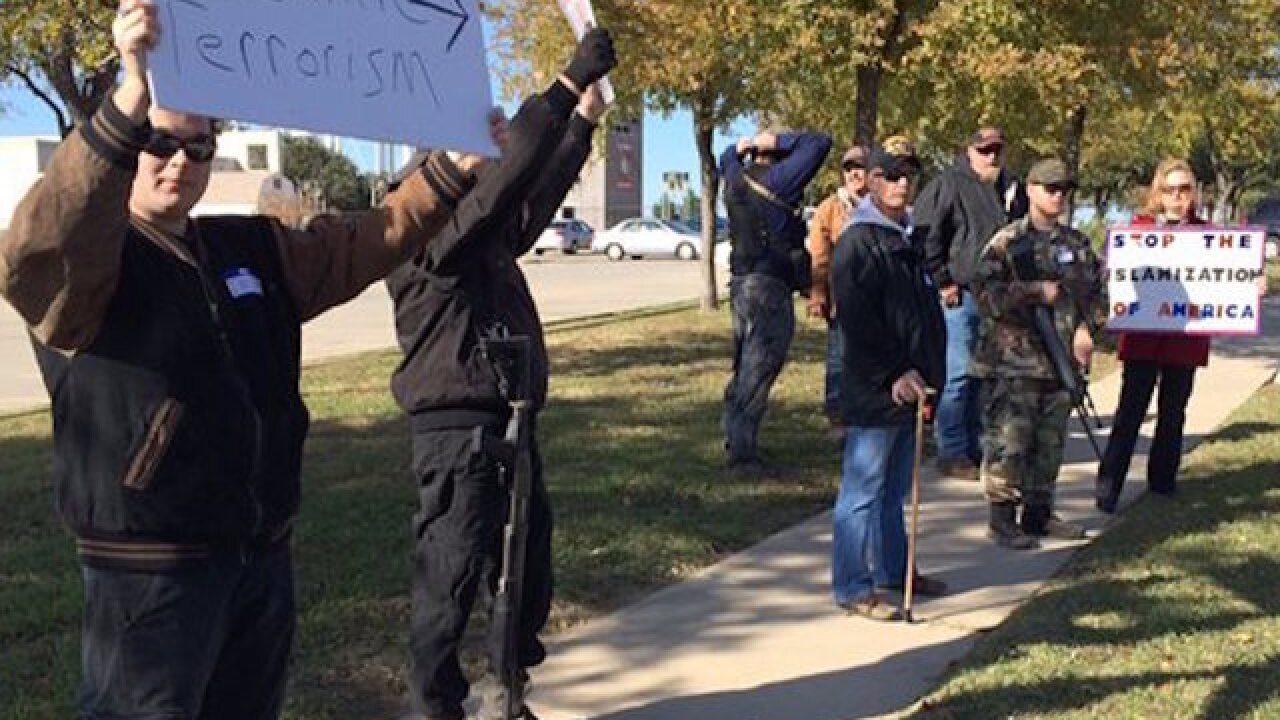 Copyright Associated Press
Avi Selk
<p>Armed demonstrators hold a protest outside the Islamic Center of Irving in the Dallas suburb of Irving, Texas. The movement has rallied against gun control efforts, patrolled the border with Mexico and recently begun confronting Muslim Americans. (Avi Selk/The Dallas Morning News via AP) MANDATORY CREDIT; MAGS OUT; TV OUT; INTERNET USE BY AP MEMBERS ONLY; NO SALES</p>

DALLAS (AP) — They are known as "Three Percenters," followers of a movement that has rallied against gun control efforts nationwide, patrolled the U.S. border with Mexico and recently begun confronting Muslim Americans.

Followers describe themselves as armed "patriots." But some of their leaders have been blamed for threats and vandalism against lawmakers, police and Muslims. One prominent member from Phoenix prompted an FBI alert in November after posting an expletive-filled Facebook video saying he was headed to upstate New York with guns to challenge a Muslim group. A Three Percenter in suburban Dallas led a mosque protest by armed, masked men that same month.

Texas has been the scene of several other incidents this year that have raised anti-Muslim unease. Two Muslim gunmen in May were shot outside a Prophet Muhammad cartoon contest in Garland. Police in Irving arrested a 14-year-old Muslim whose teachers thought his homemade clock was a bomb in September.

All this comes at a time when Texas has led a number of states trying to block the resettlement of Syrian refugees and Republican presidential candidate Donald Trump called for a "complete shutdown" of Muslims entering the U.S.

(I don't think we need this anymore, given the rewrite of the Trump reference. I wrote this so that people wouldn't get confused and think Trump was overly influential in the anti-Muslim efforts: The Three Percenters have expressed concerns about national security in waging anti-Muslim activities this year.)

"We will interfere with every move they (Muslims) make towards taking over our country," Dallas protest organizer David Wright said in response to questions the Associated Press sent to his personal Facebook page. "We are ready to fight back if they come at us violently."

Wright, who plans to protest Saturday at a different mosque, hasn't advertised the "Three Percenters" name in his activities. But he claimed membership in comments on Facebook and told the AP he was a leader in a Texas chapter. A second Facebook profile appends the Roman numeral "III" to his name, as do other Three Percenters, and features a black "III%" patch as a background photograph.

The Three Percenters movement began in 2008, galvanized by President Barack Obama's election, followers and researchers say. The name comes from the disputed percentage of colonials who armed themselves and fought the British during the American Revolution.

The number of Three Percenters is unclear partly because anyone can ascribe to the movement. The man credited as the founder has claimed 3 million on his blog. One national Three Percenters' Facebook group has about 12,000 members, including people from all 50 states.

Followers appear to consist mainly of white, male, conservative gun owners who believe the nation has been pushed to a tipping point by socialists in government aiming to disarm them, strip their constitutional rights and take their property, according to groups that track anti-government movements.

The Three Percenters lack a formal command structure, but have ideological similarities with other groups such as minutemen or militias. Their founder, a former militia member named Michael B. "Mike" Vanderboegh, stresses what he calls "armed civil disobedience."

Vanderboegh, 63, a one-time nurse's aide who lives in Pinson, Alabama, looks the part of an elderly professor. With the cadence of a Baptist preacher, he blends references to God and fist-banging disdain for "predatory government."

"What they are selling is a lie told by pathological collectivist liars ... to satisfy their insatiable appetites for your liberty and your property, even at the cost of your life," he told a crowd this year in Canon City, Colorado.

A 2009 Anti-Defamation League report called Rage Grows in America featured Vanderboegh and the Three Percenters as a growing "anti-government" movement. The Southern Poverty Law Center has labeled him an extremist.

"People like Mike Vanderboegh and others, can cause all sorts of people from the fringes who might be listening to do a violent act," said Mark Pitcavage, a defamation league expert on anti-government movements.

In 2011, one of four suspected militia members charged in a plot to attack unnamed government officials in Atlanta cited Vanderboegh's self-published online novel as inspiration, federal authorities said. Vanderboegh said at the time that the book, about a deadly federal gun raid that spurred armed citizen resistance, was merely a "useful dire warning."

Wright borrowed from Vanderboegh's tactics last month. Wright posted the names and home addresses of Muslim residents and other "Muslim sympathizers" who spoke against a city of Irving resolution they called discriminatory. Vanderboegh once shared similar information on Connecticut state senators who supported gun-control measures after the Sandy Hook shooting.

"We are more concerned about exposing corruption and preserving the Constitution and our God-given freedoms," said Hill, who runs a Three Percenter group and Facebook pages from Mississippi. "Those who have anti-government views are not welcome in our group."

In response to AP questions, Vanderboegh did not specifically address characterizations of him as an extremist. He said, generally speaking, that not "all folks claiming to be 'Three Percenters' are."

Little is known about Wright's past. He says on Facebook that he's a general contractor originally from Garland, Texas, but has declined to share biographical information, citing security concerns. Wright posted pictures of himself armed and talks tough about jihadists on Facebook. In July, Wright wrote: "We should be setting traps for them and exterminating them."

Wright said he and his cohorts protest only at certain Muslim locations. The mosque they plan to picket Saturday is in the same suburb, Richardson, as a now-defunct charity that federal investigators said had illegally funded Hamas, an Islamic militant group.

"We have never hurt anyone," Wright said. "We are careful to work within the law at all times as we prepare to defend our homes and communities from any offensive forces."