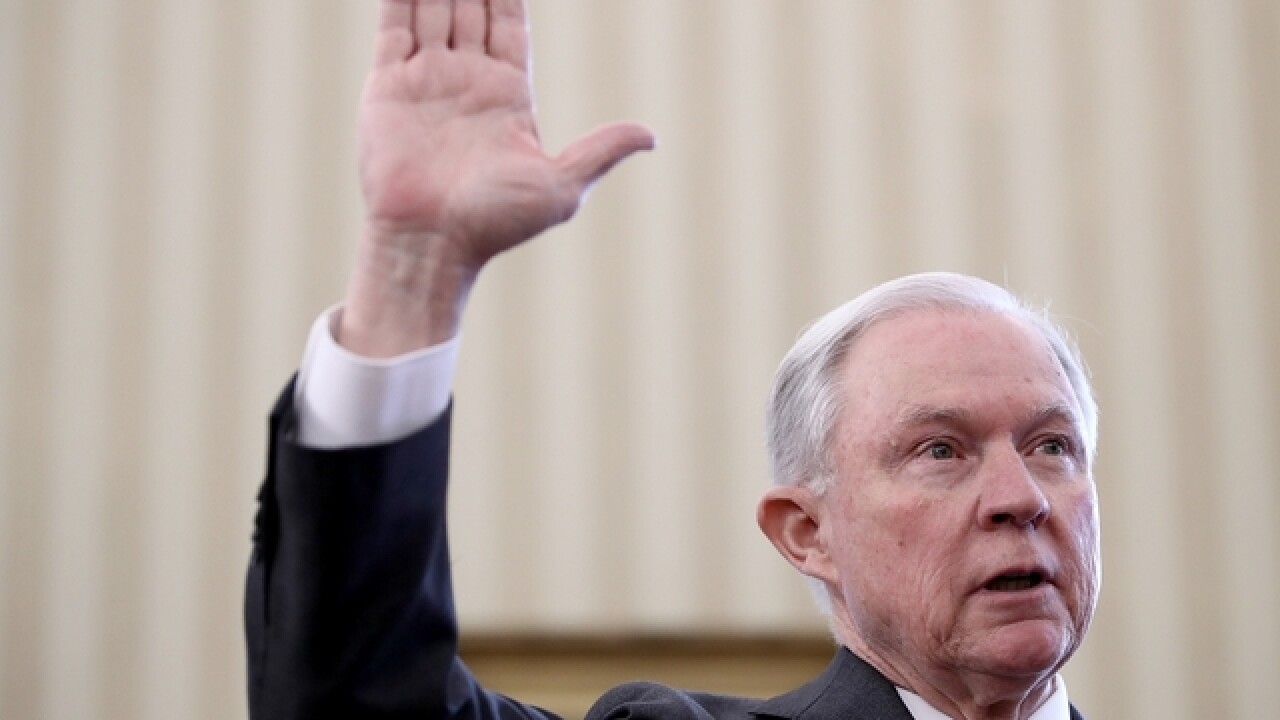 Attorney General Jeff Sessions did not disclose meetings he had last year with Russian officials when he applied for his security clearance, the Justice Department told CNN Wednesday.

Sessions, who met with Russian Ambassador Sergey Kislyak at least two times last year, didn't note those interactions on the form, which requires him to list "any contact" he or his family had with a "foreign government" or its "representatives" over the past seven years, officials said.

The new information from the Justice Department is the latest example of Sessions failing to disclose contacts he had with Russian officials. He has come under withering criticism from Democrats following revelations that he did not disclose the same contacts with Kislyak during his Senate confirmation hearings earlier this year.

Sessions initially listed a year's worth of meetings with foreign officials on the security clearance form, according to Justice Department spokeswoman Sarah Isgur Flores. But she says he and his staff were then told by an FBI employee who assisted in filling out the form, known as the SF-86, that he didn't need to list dozens of meetings with foreign ambassadors that happened in his capacity as a senator.

A legal expert who regularly assists officials in filling out the form disagrees with the Justice Department's explanation, suggesting that Sessions should have disclosed the meetings.

"My interpretation is that a member of Congress would still have to reveal the appropriate foreign government contacts notwithstanding it was on official business," said Mark Zaid, a Washington attorney who specializes in national security law.

Zaid added that in a similar circumstance he advised a member of Congress to list all foreign contacts -- including those made during official US government business.

To obtain a security clearance, a federal official is not required to list the meetings if they were part of a foreign conference he or she attended while conducting government business. Sessions' meetings, however, do not appear to be tied to foreign conferences.

The omission comes after problems that Trump adviser Jared Kushner and the President's ex-national security adviser, Michael Flynn, have had on their own security forms. Kushner prematurely submitted his SF-86 form without listing foreign contacts and had to notify the FBI the next day that he was willing to provide the information. Flynn is under investigation for not properly disclosing payments linked to Russia for his foreign trips.

Lawmakers have raised questions about Sessions' meetings with Russian officials while he played a prominent role in the Trump campaign -- meetings that he only disclosed after The Washington Post revealed them. He is under scrutiny as well for his role in the firing of FBI Director James Comey despite his recusal from the Russia investigation.

Sessions could be a witness before the House and Senate intelligence panels as part of their ongoing probes into potential Trump campaign collusion with Russia, lawmakers said. And attendees at a classified House briefing last week with the deputy attorney general, Rod Rosenstein, said Sessions' name was raised when lawmakers asked if the attorney general had a role in the Comey firing. Rosenstein, sources said, declined to comment, but noted that such matters could be investigated by Robert Mueller, the recently named special counsel in the Russia probe.

Flores said the "recommendation to remove Comey was a personnel decision based on concerns about the effectiveness of his leadership" at the bureau and that it had "nothing to do with the substance of the investigation." Since the firing, President Donald Trump acknowledged in an interview with NBC News that the Russia investigation was on his mind as he dismissed Comey.

Sessions' meetings with Kislyak have become a major political problem for the new attorney general.

At his confirmation hearing January 10, Sessions testified that he "did not have communications" with the Russians during the campaign. He made the same assertion in an official questionnaire.

He was sworn in as attorney general February 9 and subsequently received a security clearance, even though he didn't mention the Kislyak meetings on his paperwork.

The Washington Post reported March 1 that Sessions had two undisclosed meetings with Kislyak during the campaign, which brought Sessions into the widening Russia scandal for the first time.

Sessions recused himself from overseeing the FBI's Russia investigation one day later.

"Let me be clear," Sessions said before announcing his recusal, "I never had meetings with Russian operatives or Russian intermediaries about the Trump campaign."

He then amended his Senate Judiciary Committee testimony to note the two reported interactions he had with Kislyak. In the amended testimony, the former Alabama senator said he spoke "briefly" in July 2016 to the Russian ambassador during the Republican National Convention in Cleveland. He also said that he spoke with the Russian ambassador in September 2016 in his Senate office with his staff members. He said he did not initially list those meetings because he did not think they were relevant to the questions asked during the confirmation proceedings.

He added: "I do not recall any discussions with the Russian ambassador or any other representative of the Russian government, regarding the political campaign on these occasions or any other occasion."

Lawmakers on the House and Senate intelligence committees say it is possible that Sessions could be questioned about those meetings and his role in the campaign -- as well as the circumstances around the Comey firing.

Sen. Chuck Schumer, the Senate minority leader, told CNN in an April 28 interview, "I'd be happy if they brought him before the committee and had him testify."

"Look, there are a lot of questions about Jeff Sessions," the New York Democrat said of his former colleague. "That's why I called on him to resign."