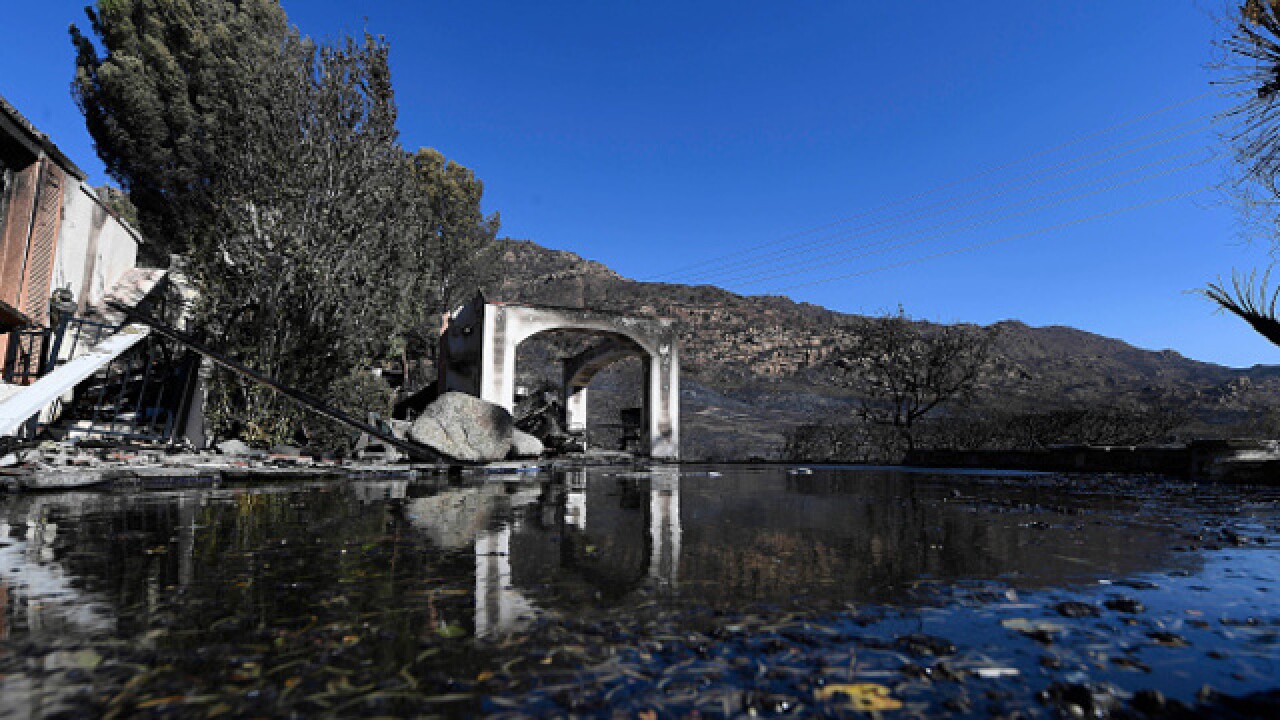 Copyright 2018 Scripps Media, Inc. All rights reserved. This material may not be published, broadcast, rewritten, or redistributed.
Kevork Djansezian
<p>THOUSAND OAKS, CA - NOVEMBER 12: A house destroyed by the Woolsey Fire is seen on November 12, 2018 in Thousand Oaks, California. Multiple fires are burning throughout the state claiming dozens of lives and hundreds of structures. (Photo by Kevork Djansezian/Getty Images)</p>

The NWS said there's a chance of rain Wednesday evening, a virtual certainty of it after midnight amid southwest winds of around 15 miles per hour and a 50 percent chance on Thanksgiving morning, followed by a partly cloudy afternoon.

Between seven-tenths of an inch and an inch-and-a-quarter of rain are expected to fall on coastal slopes and in the foothills, which could trigger slides over areas denuded by the Woolsey Fire in L.A. and Ventura counties and the Hill fire in Ventura County, forecasters said. Highway 1 and Santa Monica Mountain canyon roads are particularly vulnerable, they said.

Authorities reminded Southlanders in burn areas of flood safety preparations that should be made before the rain starts.

The Woolsey Fire unified command warned that mud and debris flows ``are a very realistic threat to the communities affected by the Hill and Woolsey fires. Due to an increased probability of mud and debris flows in these fire areas, it is important to plan and prepare. Evacuation orders should not be taken lightly, and are ordered because there is a threat to life and property.''

Some fire-damaged areas remain unsafe, the electrical system is ``extremely damaged,'' and road crews are working to clear rocks as emergency

Pestrella said he expected Pacific Coast Highway would be closed at some point.

Up-to-date information on road closures can be found at www.lacounty.gov/woolseyfire/rain-after-fire-resources.

The NWS said there is a 30 percent probability that the upcoming rainfall will be sufficient to trigger debris flows in the Woolsey Fire and Hill Fire areas.

Burn area residents concerned about mudflow can pick up empty sandbags at their local fire stations, and can visit www.lacounty.gov/larain for storm season emergency resources, including Los Angeles County's ``Homeowners Guide to Flood, Debris and Erosion Control.'' The sandbags should be used to divert potential flows, not dam them.