Caravan marches toward US border in show of force 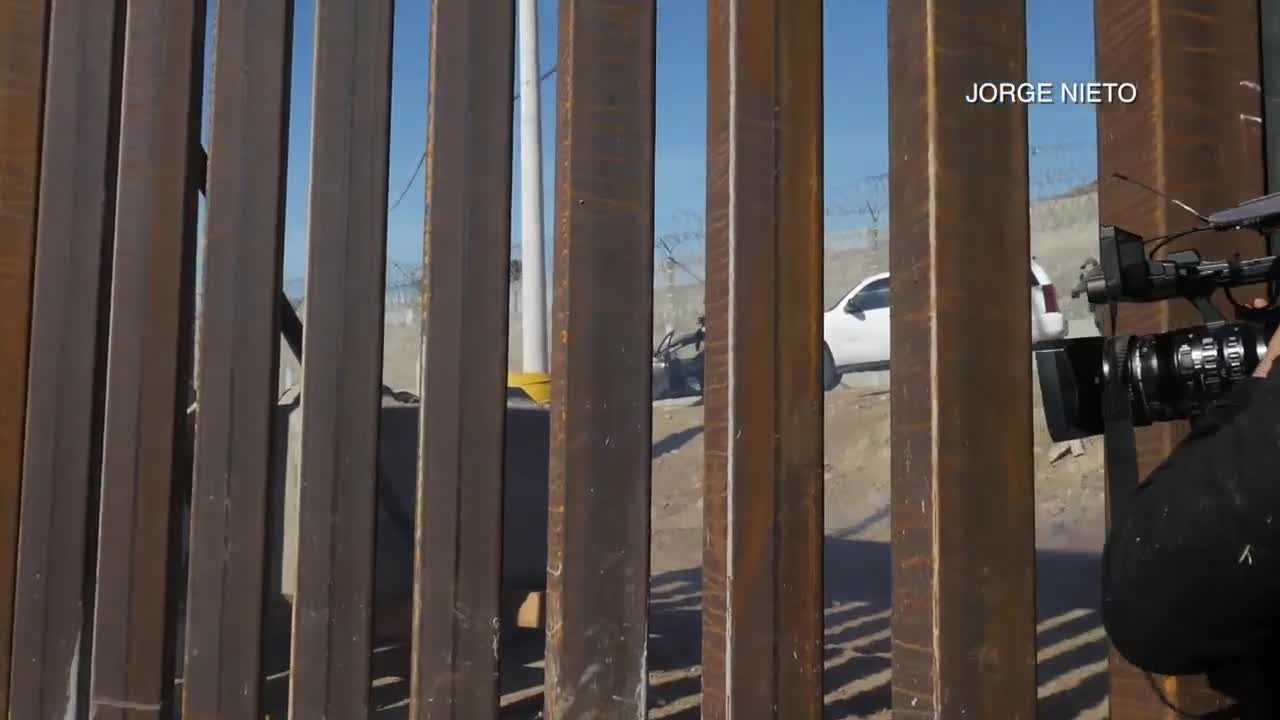 The group was kept back with tear gas. 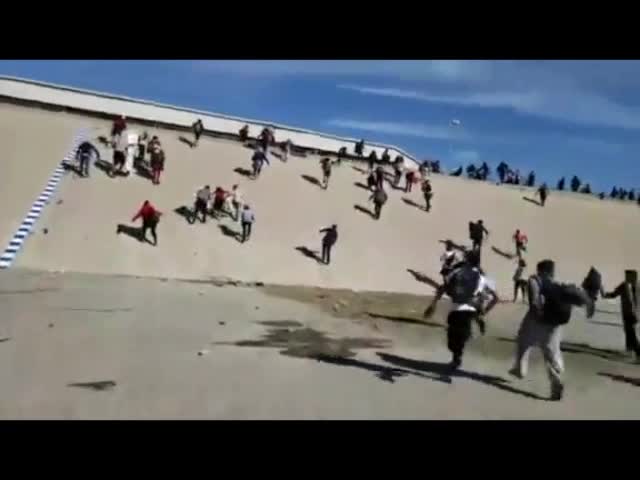 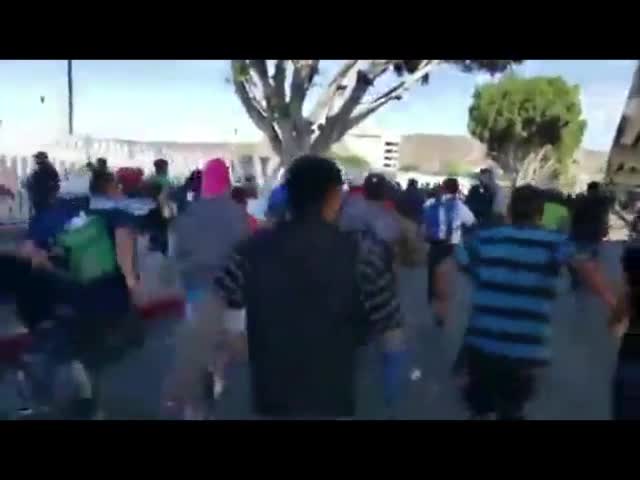 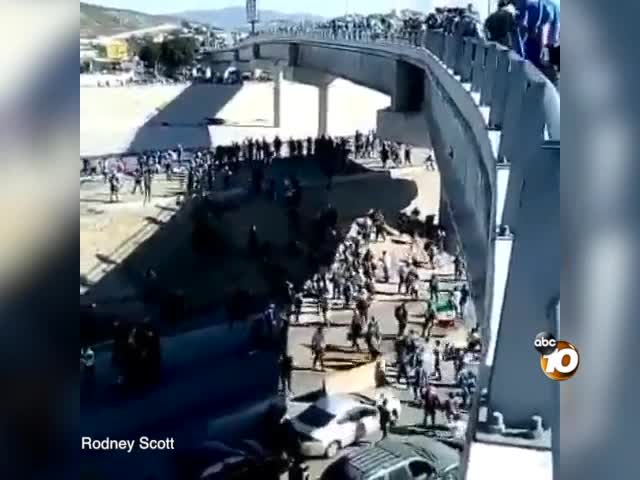 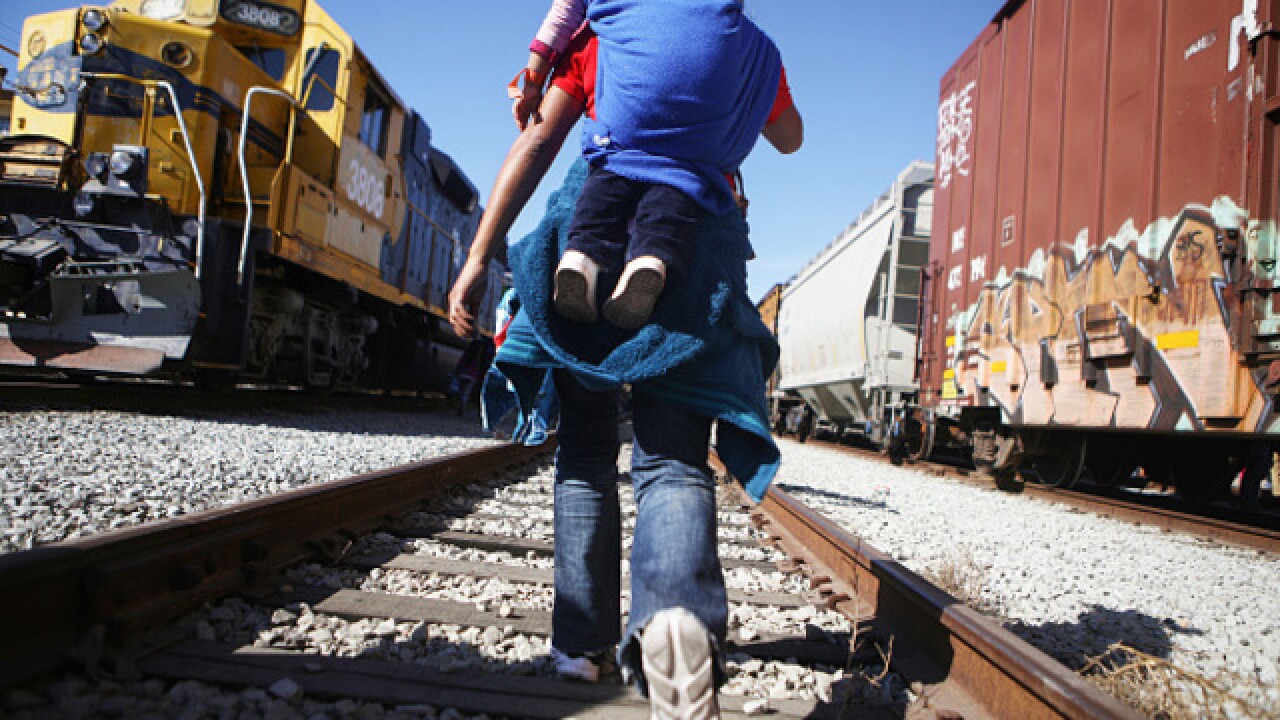 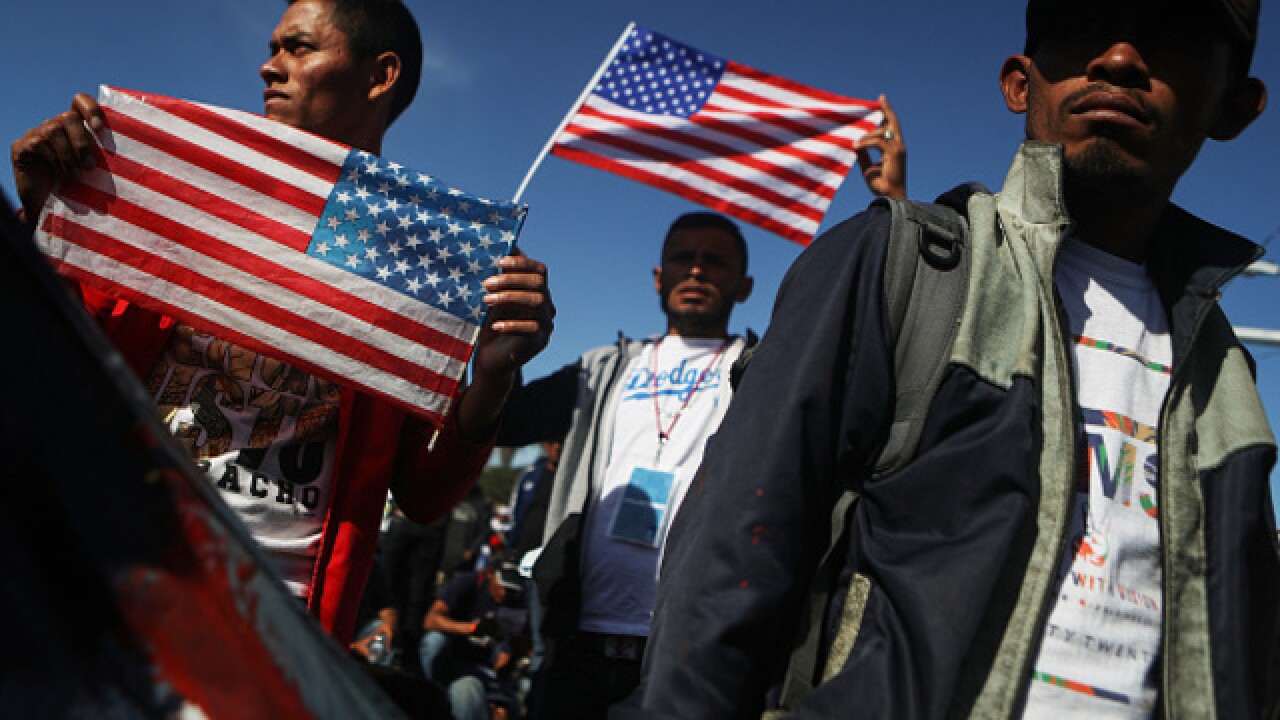 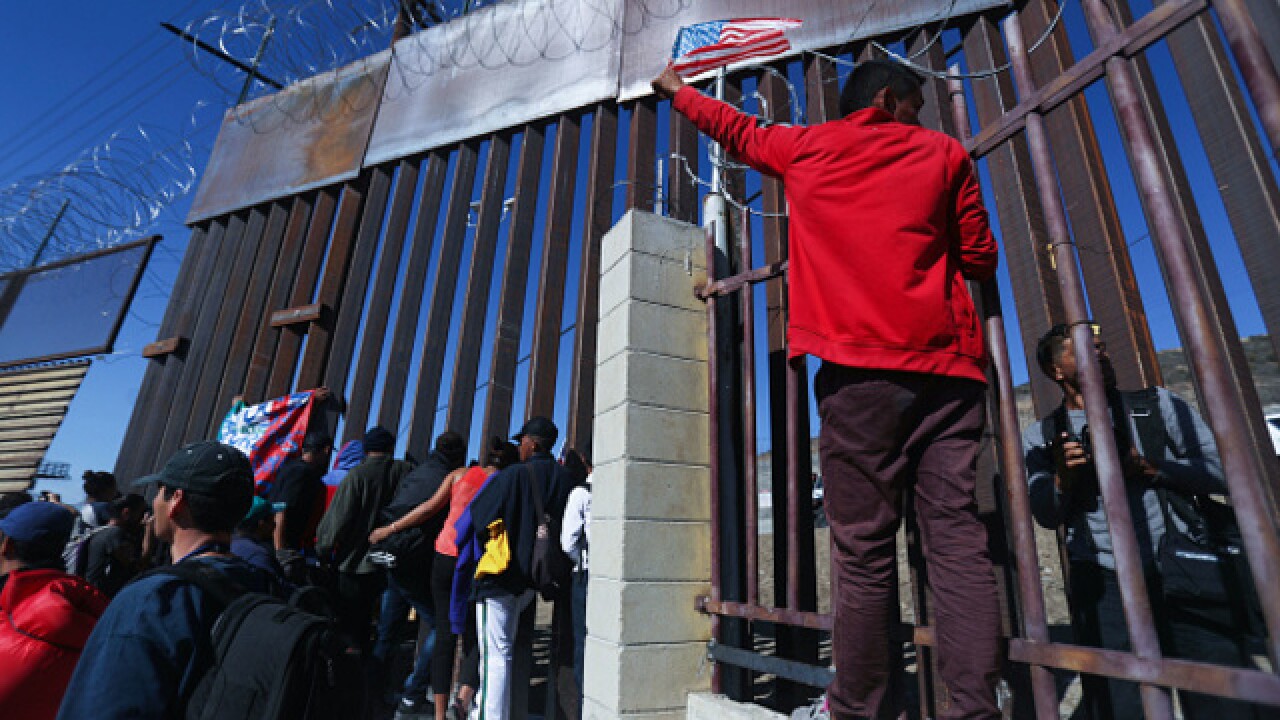 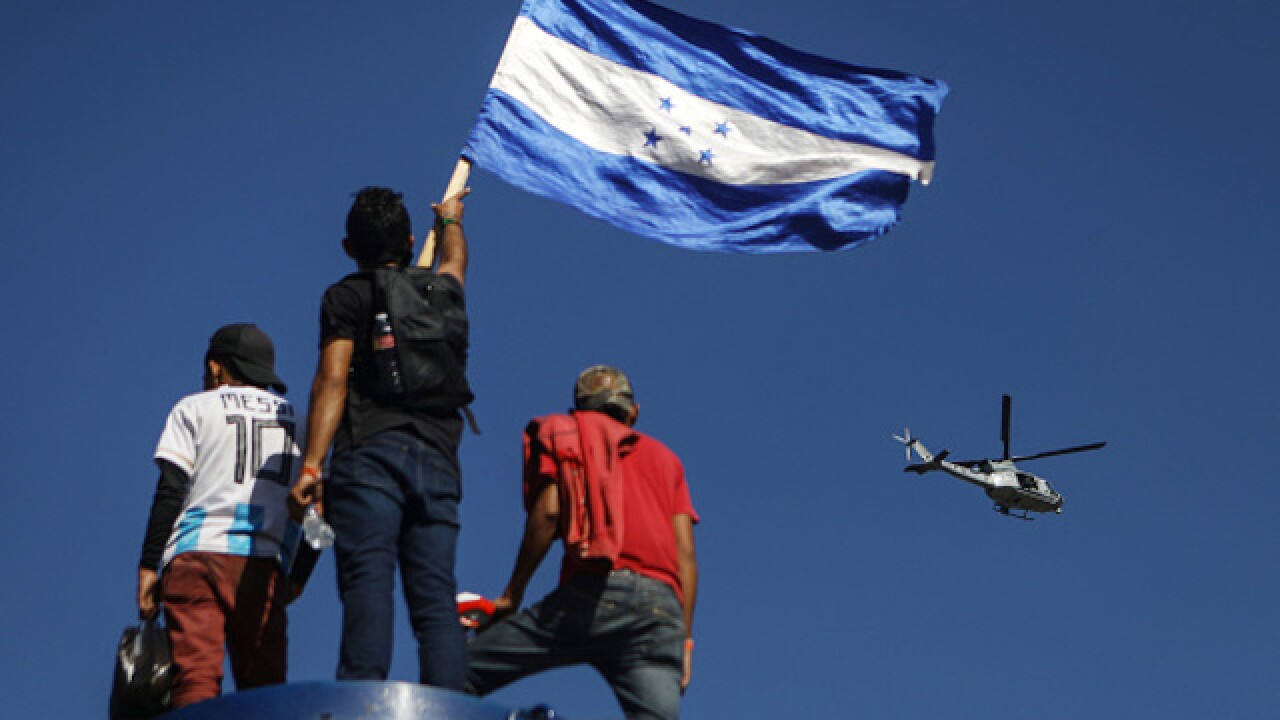 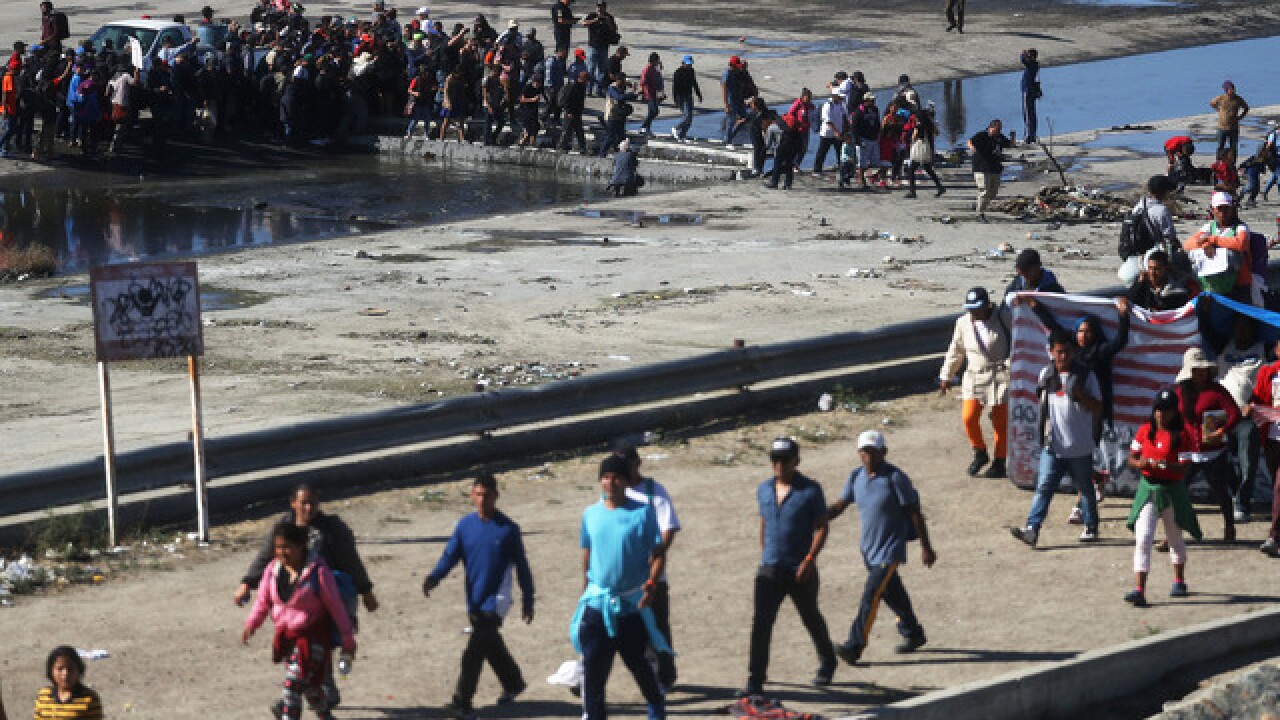 Tijuana police have arrested 39 people in connection with the attempt by some migrants to rush the border Sunday in an attempt to enter the US, the agency said in a statement on Facebook.

The police said the 39 are migrants and will be will reported to Mexican immigration authorities to be deported to their home countries.

Earlier Sunday, Mexico's interior ministry said it had stopped nearly 500 migrants who tried to enter the US illegally, and that those who could be identified as having participated would be deported.

TIJUANA, Mexico (KGTV and AP) — Clashes erupted at the U.S.-Mexico border Sunday as members of the migrant caravan tried to cross illegally, leading to a closure of the San Ysidro checkpoint and two San Diego County freeways.

Customs and Border Protection confirmed Sunday night that there were multiple instances of people throwing projectiles at CBP personnel, including Border Patrol agents hit with rocks.

CBP officers used crowd-dispersing methods including pepper balls and CS canisters. There were no reports of injuries, officials said. Fumes from the tear gas were blown toward people who were hundreds of feet away and not attempting to enter the U.S., the Associated Press reported.

"As the demonstrations on the Mexican side reached the border area, some members of the demonstration split off to head towards multiple locations along the border. Some attempted to enter the U.S. both directly east and west of the border crossing. These attempts to illegally enter the U.S., and the response to them continue. Some attempted to illegally enter the U.S. through both the northbound and southbound vehicle lanes at the port of entry itself. Those persons were stopped and turned back to Mexico," CBP said in a statement.

The U.S. Border Patrol also made apprehensions of people who tried to enter the U.S. illegally, including in the vehicle lanes of the border crossing, acccording to CBP officials. The Mexican Interior Ministry has said it would immediately deport Central American migrants who tried to "violently" breach the border with the U.S. just south of California and that it would reinforce the border.

Military service members who were deployed to the Southwestern border in early November "will not be conducting law enforcement functions", the U.S. Northern Command said in a news release Sunday, adding that the troops were authorized to provide force protection for CBP. Military engineers moved barricades and military police were added to the personnel presence at San Ysidro, officials said.

San Diego Police were on standby to assist at the border if needed, department officials told 10News.

Interstates 5 and 805 were also shut down near San Ysidro for several hours due to the activity, leading to traffic backup in the area as drivers were rerouted during the busy Thanksgiving travel weekend.

San Diego's Metropolitan Transit System notified residents about noon that there would also be no Blue Line trolley service at the San Ysidro Transit Center. The service resumed about 4 p.m.

The Las Americas Outlet Mall shut down during the busy holiday shopping weekend, tweeting "We are committed to providing a safe & secure shopping environment for our shoppers, retailers and employees."

In video captured in Mexico, hundreds of members of the caravan could be seen marching across a canal toward the border. Watch video in the player below:

About 5,000 Central American migrants were in Tijuana, with many of them living in the Benito Juarez sports complex. Tijuana Mayor Juan Manuel Gastelum called the situation a humanitarian crisis and said he was requesting help from the United Nation's Office for Coordination of Humanitarian Affairs.

President Donald Trump tweeted about Mexico's response to the border situation before the closures happened.

Would be very SMART if Mexico would stop the Caravans long before they get to our Southern Border, or if originating countries would not let them form (it is a way they get certain people out of their country and dump in U.S. No longer). Dems created this problem. No crossings!

"Today's unprecedented demonstration at the San Ysidro Port of Entry is a direct result of President Trump's failed leadership,'' Vargas said in a statement. "His complete disregard for human rights, international law, and immigration law threatens the safety of federal officers and the millions of people that pass through the border region.''

The Associated Press and City News Service contributed to this report.