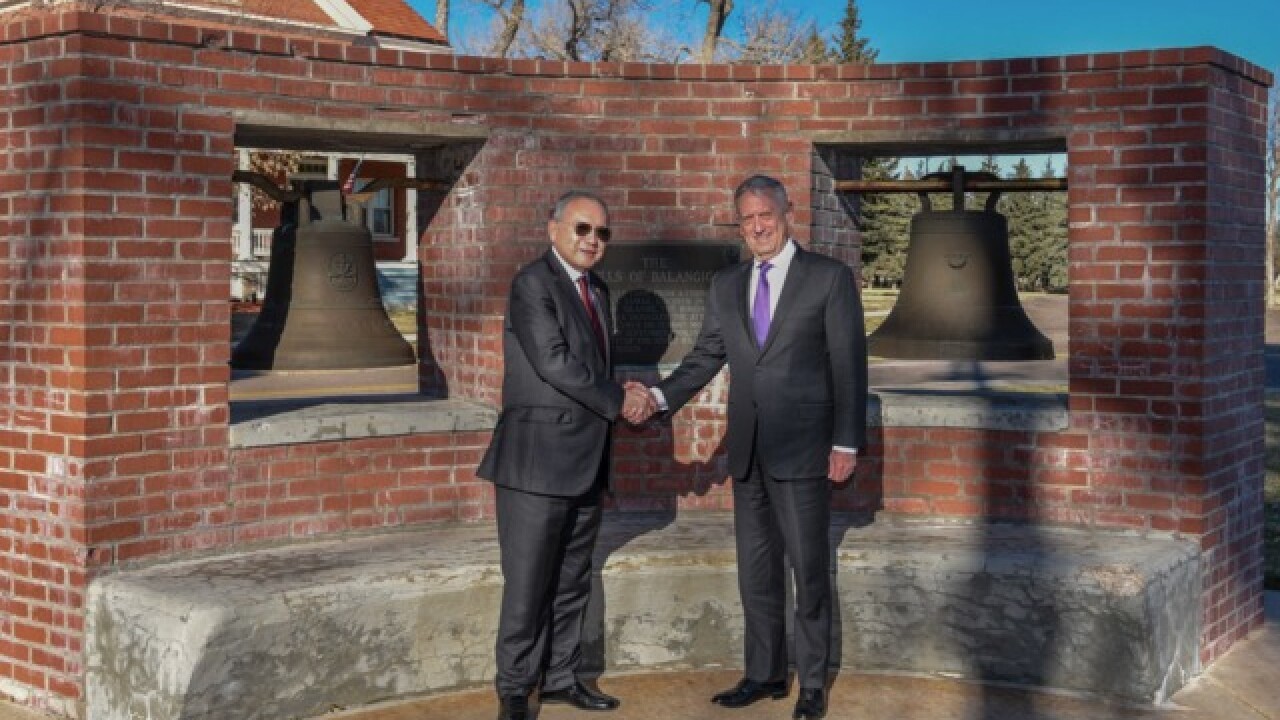 CHEYENNE, Wyo. (AP) — Three war-trophy bells seized by U.S. troops over a century ago got a send-off back to the Philippines on Wednesday by U.S. Defense Secretary James Mattis, who called the controversial decision to repatriate them an important gesture of friendship between the two countries.

Some veterans and officials in the U.S. oppose returning the Bells of Balangiga, calling them memorials to American war dead. But Filipinos revere the bells as symbols of national pride.

U.S. Army soldiers took the bells after an attack killed 48 American troops in 1901, during the U.S. occupation of the Philippines. Two of the Bells of Balangiga are at F.E. Warren Air Force Base in Cheyenne, and the third is with the U.S. Army in South Korea.

Philippine presidents including current President Rodrigo Duterte, have repeatedly called for the bells' return. Now, President Donald Trump's administration has agreed that bolstering the U.S. relationship with a key international ally outweighs concerns at home, even among Republican political allies.

Mattis marked the start of a several-week process to return the bells to a church in the Philippines with a visit to the two bells at F.E. Warren. With him was the Philippine ambassador to the U.S, H.E. Jose Manuel G. Romualdez.

"History reminds us that all wars end. In returning the Bells of Balangiga to our ally and our friend, the Philippines, we pick up our generation's responsibility to deepen the respect between our peoples," Mattis said in a ceremony at the base.

Soldiers from the Philippines fought alongside U.S. troops in World War II, the Korean War, Vietnam War and in the recent struggle against international terrorism, Mattis pointed out.

"To those who fear that we lose something by returning the bells, please hear me when I say that the bells mark time, but courage is timeless," Mattis said.

Those opposed to returning the bells include Wyoming Gov. Matt Mead, a Republican. Mead took part in the ceremony even as he sides with U.S. veterans who worry that returning the bells could lead to the repatriation of any number of items serving as memorials to American war dead.

"We know you and the president have looked at this, and the highest priority of the military of course is national security," Mead told Mattis at the gathering of a couple hundred Air Force officers, personnel and family members. "We absolutely need to build those friendships."

Wyoming's all-Republican congressional delegation also opposes the bells' return, saying in a joint statement released by Sen. Mike Enzi spokesman Max D'Onofrio that repatriation would set a dangerous precedent for other veterans' memorials in the U.S.