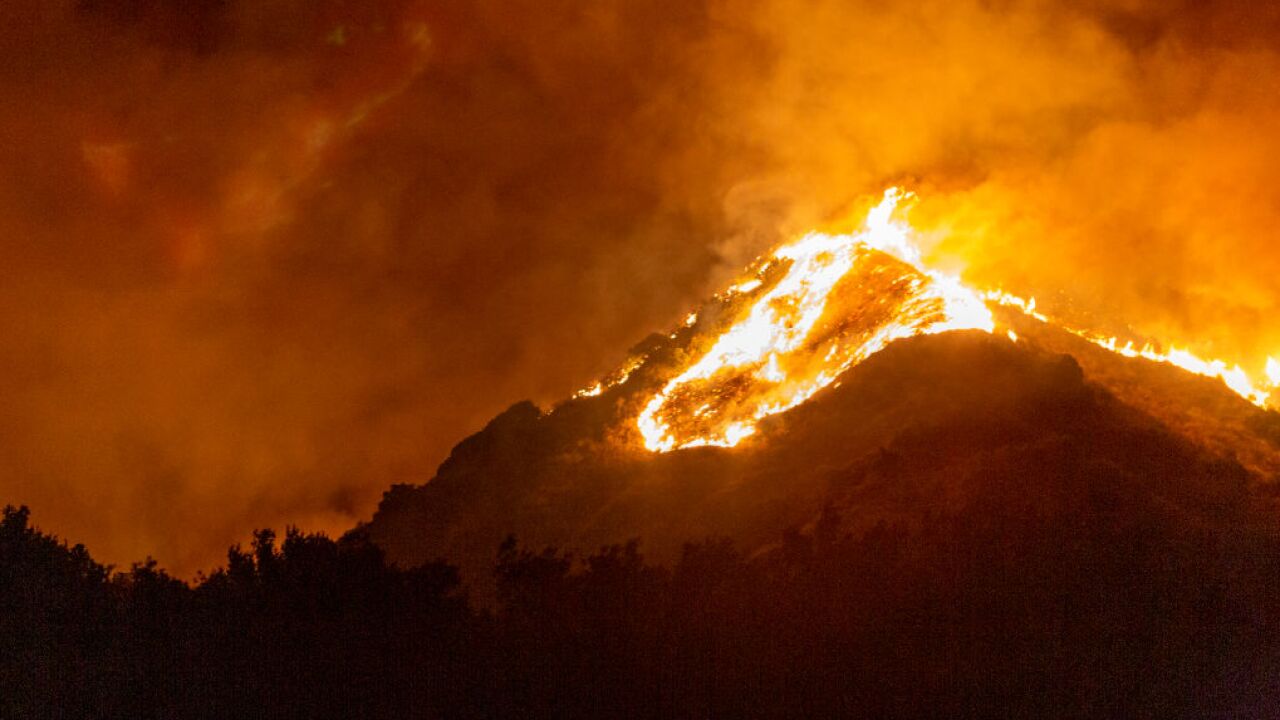 David McNew/Getty Images
SOMIS, CA - NOVEMBER 01: The Maria Fire burns on a hillside as it expands up to 8,000 acres on its first night on November 1, 2019 near Somis, California. Southern California has been hit by a series of dangerous, fast-moving wildfires this week as Santa Ana Winds ushered in strong gusts up to 80 mph and extremely low humidity. (Photo by David McNew/Getty Images)

The fire that erupted on a hilltop northwest of Los Angeles headed for what would be its third day Saturday and firefighters were finding it hard work as shifting winds made the front line a moving target.

The Maria Fire had burned 9,412 acres and prompted evacuation orders for nearly 11,000 people since it began Thursday evening. It is 20% contained as of 8:27 a.m. Saturday.

On Friday, a tug of war developed between onshore and offshore winds.

"It has been an uphill battle ever since," Ventura County Fire Chief Mark Lorenzen said. "As winds shift, we have a whole new fuel bed open up."

Winds and skin-cracking low humidity were expected to make Saturday another difficult day for firefighters.

Crews battled to keep the flames away from orchards and farms in the rural area. Three buildings were destroyed.

The cause was under investigation but there was a troubling possibility that an electrical line might have been involved — as such lines have been at other recent fires.

Southern California Edison said Friday that it re-energized a 16,000-volt power line 13 minutes before the fire erupted in the same area.

Edison and other utilities up and down the state shut off power to hundreds of thousands of people this week out of concerns that high winds could cause power lines to spark and start fires.

SCE will cooperate with investigators, the utility said.

The fire began during what had been expected to be the tail end of a siege of Santa Ana winds that fanned fires that destroyed buildings and prompted mass evacuations across the region.

The fires even caught the attention of teenage climate-change activist Greta Thunberg, who was visiting Los Angeles for a rally.

"It has been horrifying to see what is going on here and what happens here often and that it's gotten worse because of the climate crisis," she said.

Red flag weather warnings of extreme fire danger had been expected to expire Friday evening but forecasters extended them to 6 p.m. Saturday for valleys and interior mountains of Ventura and Los Angeles counties, citing the withering conditions.

In Northern California, more people were allowed to return to areas evacuated due to the huge Kincade Fire burning for days in the Sonoma County wine country.

The 121-square-mile (313-square-kilometer) fire was 70% contained, the California Department of Forestry and Fire Protection said.

The tally of destroyed homes reached 174 and there were 35 more damaged, Cal Fire said. Many other structures also burned.

But the Contra Costa County Fire Protection District pegged the utility's equipment as the cause of three smaller fires that cropped up Sunday in the San Francisco Bay Area suburbs of Martinez and Lafayette.

And while the cause of the Kincade Fire hasn't been determined, PG&E reported a problem with a transmission tower near the spot where the fire started.