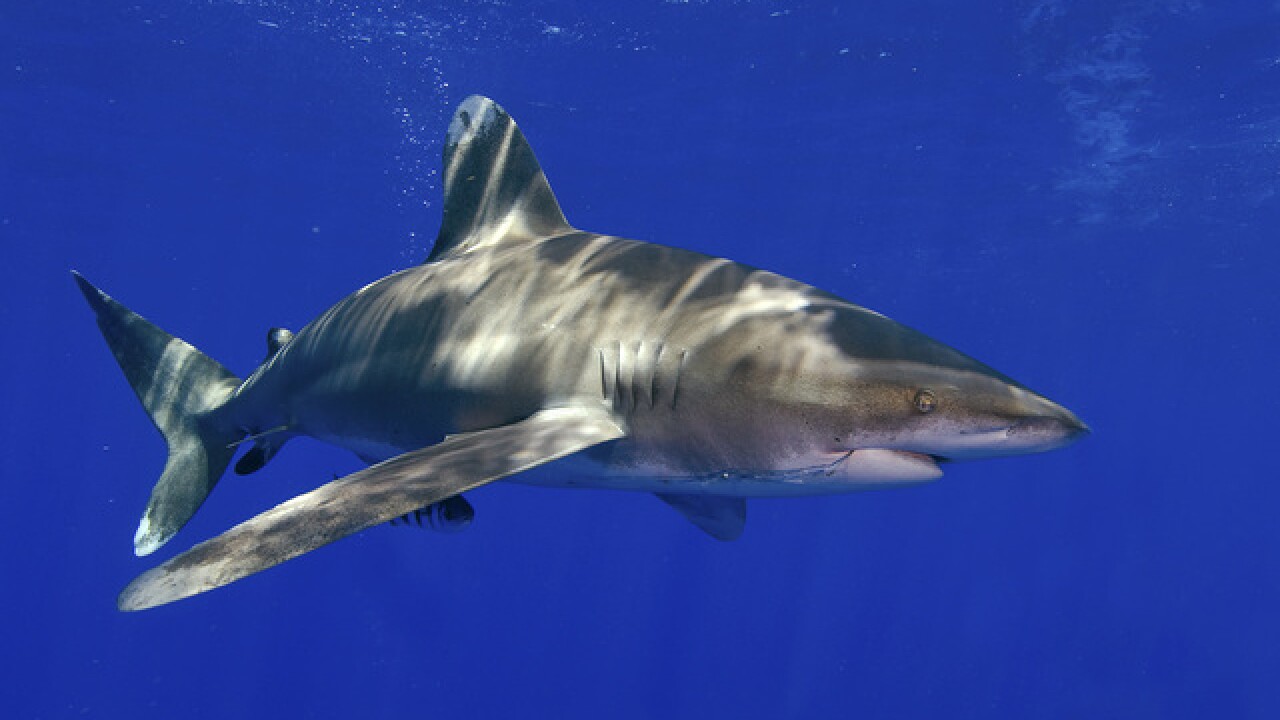 Copyright 2017 The Associated Press. All rights reserved.
Neil Hammerschlag
<p>In this June 21, 2008, photo provided by the University of Miami Rosenstiel School of Marine and Atmospheric Science, a whitetip shark swims off Cat Island in the Bahamas. The National Marine Fisheries Service said in December 2016 that the sharks are likely to become endangered. Threats to the sharks include fishing pressure all over the world, as their fins are prized in Asian markets for use in soup.</p>

WELLFLEET, Mass. (AP) — A man boogie boarding off a Cape Cod beach was attacked by a shark on Saturday and died later at a hospital, becoming the state's first shark attack fatality in more than 80 years.

The 26-year-old man from Revere succumbed to his injuries following the attack in the waters off Newcomb Hollow Beach in Wellfleet at around noon, Wellfleet Police Lt. Michael Hurley said.

Life-saving measures were attempted on the beach before the man was taken to Cape Cod Hospital in Hyannis, where he was pronounced dead, State Police spokesman David Procopio said. The beach has been closed to swimming.

The attack is the first fatal shark attack in Massachusetts since 1936, and the second shark attack this season.

A 61-year-old New York man was severely injured Aug. 15 after fighting off a shark off Truro, about 4 miles north of Saturday's attack. He's currently recovering in a Boston hospital.

"Today is just keeping everyone out of water," Hurley said. "There'll be a determination later about what the town wants to do with the beaches going forward."

Beachgoers said the Wellfleet beach is popular with surfers, and with sunny skies and warm temperatures Saturday it was busy, even though the summer season was over and lifeguards were no longer on watch.

RELATED: What experts say you should do if a shark attacks

Joe Booth, a local fisherman and surfer, said he was on shore when he saw the man and his friend boogie boarding when the attack happened.

He said he saw the man kick aggressively kick something behind him and a flicker of a tail from the water. He realized what was happening when the friend came ashore dragging his injured friend.

"I was that guy on the beach screaming, 'Shark, shark!" Booth said. "It was like right out of that movie Jaws. This has turned into Amity Island real quick out here."

Booth said others on the beach attempted to make a tourniquet while others frantically called 911.

Hayley Williamson, a Cape Cod resident and former lifeguard who was on the beach at the time, was in disbelief after the man, who police have not yet identified was rushed in an ambulance.

"We've been surfing all morning right here and they were just further down," she said of the two boogie boarders. "Right spot, wrong time, I guess."

A Cape Cod politician said officials who did not move aggressive action against sharks bore some responsibility for the fatal attack. Barnstable County Commissioner Ron Beaty said he had warned something like this could happen.

"It is my personal belief that the responsibility for this horrible shark attack rests squarely upon the shoulders of the aforementioned officials for their utter lack of attention and inaction regarding the growing shark problem on Cape Cod of the last few years," he said.

The family of the victim was notified of the death but his name was not released, Procopio said.

The state's last shark attack fatality was on July 25, 1936, when 16-year-old Joseph Troy Jr. was bitten in waters off Mattapoisett.

Troy, of Boston's Dorchester neighborhood, was visiting an uncle and was swimming about 50 feet offshore when the shark attacked.