Making It In San Diego: This is where rent in San Diego is rising the fastest

SAN DIEGO (KGTV) -- The cost of living in San Diego is rising, with rents in some of the more typically affordable central city neighborhoods increasing the most.

According to a housing report released Thursday by Zillow, rents across the city are rising three percent year-over-year. But that three percent increase looks modest compared to some of San Diego’s communities.

According to Zillow, the cost to rent rose 16 percent over the last year in Teralta East and more than 12 percent in Colina del Sol. The neighborhoods are east of Interstate 15, bordered by El Cajon and University Avenues to the north and south, Fairmount Avenue to the west, and 54th St. to the east.

See the chart below for the neighborhoods with the fastest growing rents: 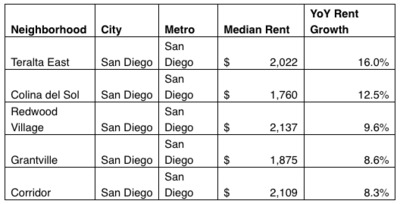 The data also show that, while rent in some areas is rising faster than others, the median rental payment is $2,542 per month.

Similarly, the cost to own a home is up more than seven percent from the same time last year with the median home value at $584,100.

The report adds that there are 19.8 percent more homes on the market now than last year.