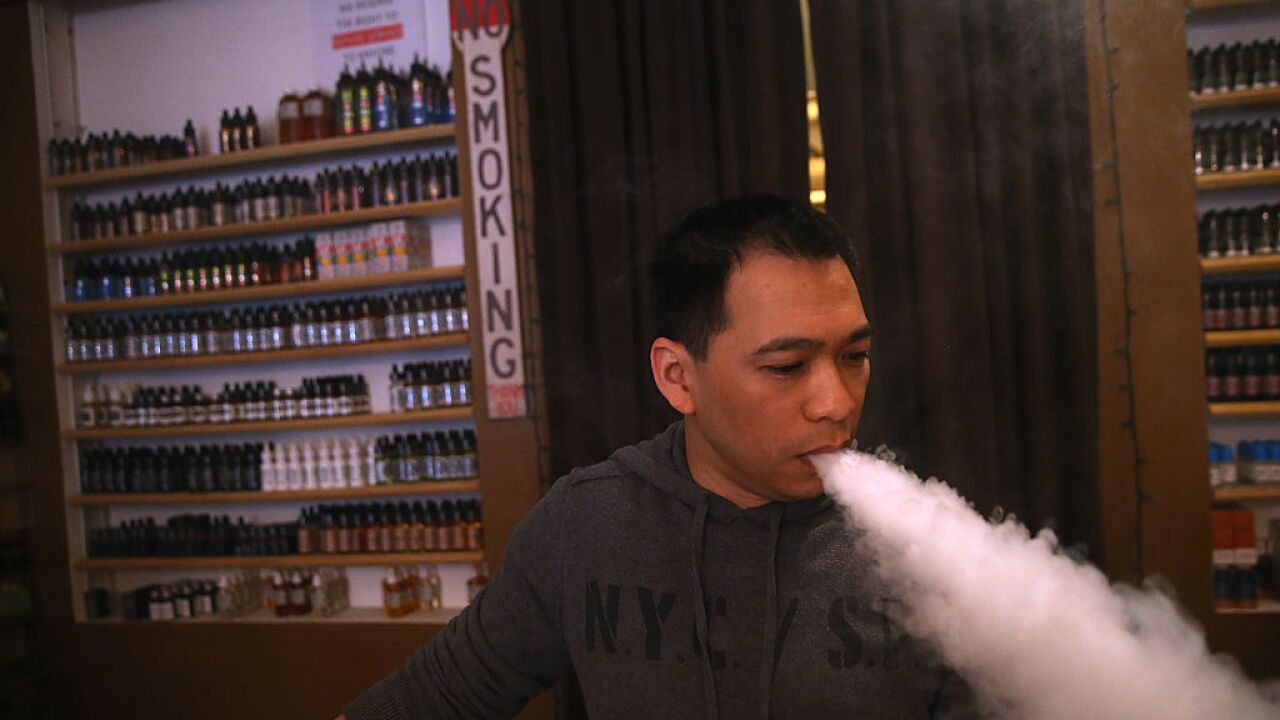 Justin Sullivan/Getty Images
SAN FRANCISCO, CA - MAY 05: Christopher Chin blows vapor from an e-cigarette at Gone With the Smoke Vapor Lounge on May 5, 2016 in San Francisco, California. The U.S. Food and Drug Administration announced new federal regulations on electronic cigarettes that will be the same as traditional tobacco cigarettes and chewing tobacco. (Photo by Justin Sullivan/Getty Images)

LOS ANGELES (CNS) - Los Angeles County public health officials announced Friday the county's first known death of a person stemming from the use of e-cigarettes, or vaping -- the fourth such death nationwide.

Dr. Muntu Davis, the county's health officer, said the patient was an ``older adult who had chronic underlying health conditions,'' but vaping is considered the probable cause of death. He declined to give the patient's exact age, but said the person was over 55.

Public health officials said there have been a total of 12 Los Angeles County cases of illnesses stemming from e-cigarettes, with the illness dubbed vaping-associated pulmonary injury, or VAPI. One of those 12 cases was the person who died. Authorities declined to say if the other 11 patients were still hospitalized.

Health officials declined to specify exactly what type of vaping product the person used. Davis stressed that ``it is not clear at this time if there is a specific product or device'' leading to the illnesses. He said that in all but one of the 12 county cases, the patients had a ``history of using a cannabis or marijuana-type product,'' notably THC, the active chemical in marijuana.

Echoing a warning issued Friday morning by the U.S. Centers for Disease Control and Prevention, Barbara Ferrer, director of the county Department of Public Health, urged residents ``to stop vaping now until further information about what is causing lung damage and deaths can be understood.''

``The Los Angeles County Department of Public Health takes this threat seriously and today we're issuing a warning to all residents about the use of these devices as potentially harmful to proper lung function,'' Ferrer said.

The Los Angeles County death is the fourth connected to vaping nationally. Authorities in Indiana on Friday morning announced a vaping-related death, and deaths were previously reported in Illinois and Oregon.

``We are committed to finding out what is making people sick,'' CDC director Dr. Robert R. Redfield said in a statement. ``All available information is being carefully analyzed, and these initial findings are helping us narrow the focus of our investigation and get us closer to the answers needed to save lives.''

According to the CDC, possible vaping-related illnesses have been reported in more than 25 states.

Davis said the county has been receiving reports since Aug. 14 of ``people experiencing severe and sudden lung disease after having a history of vaping.''

He said the cases are spread across the county, with two-thirds of them in teens and young adults.

``We're not seeing this in just one age group,'' he said, nothing that the cases ``really cross the gamut'' of ages and health history.