Manhunt continues for gunman in shooting of deputies 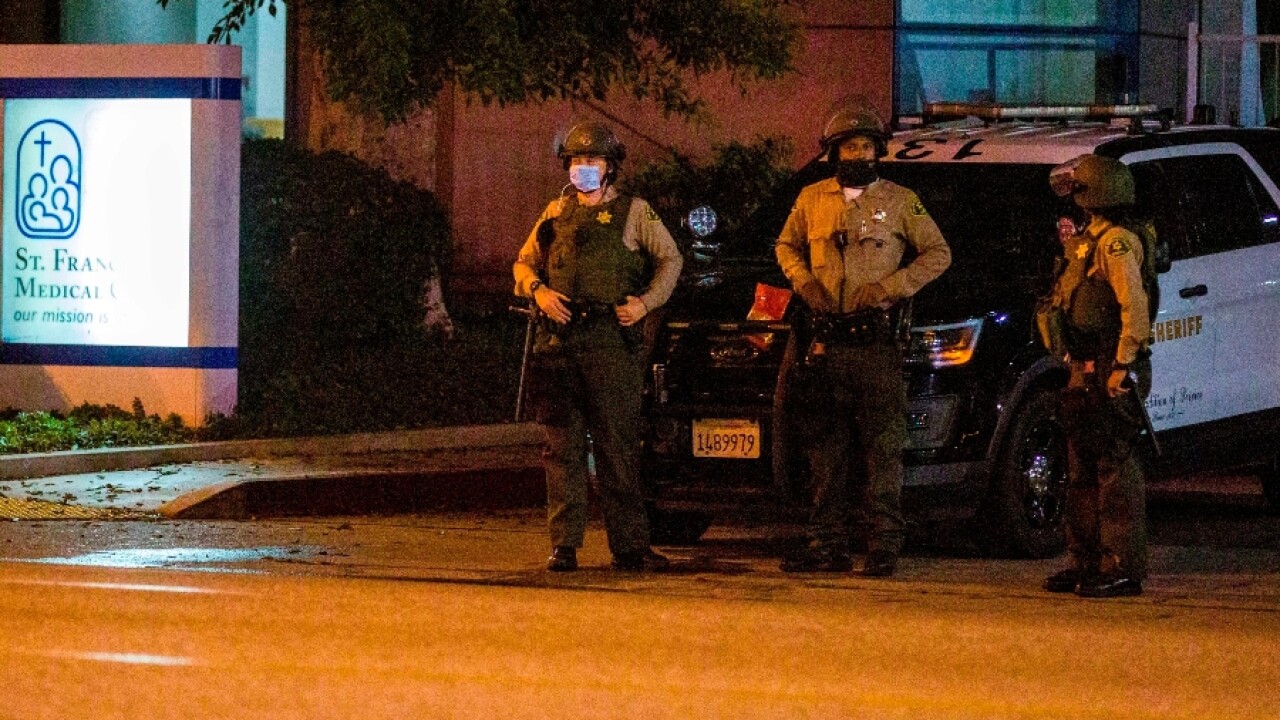 COMPTON, Calif. (CNS) - A manhunt was underway Tuesday for the gunman who brazenly shot two Los Angeles County sheriff's deputies as they sat in a patrol SUV at a Compton rail station, with a reward for information leading to the suspect increasing to $200,000.

The deputies, members of the Transit Services Bureau, remained hospitalized in critical condition, but Sheriff Alex Villanueva was hopeful Monday about their prognosis.

"Fortunately, they were spared any injury to a vital organ that would have jeopardized their life immediately," Villanueva told KNX Newsradio.

But the sheriff said the deputies -- described only as a 24-year-old man and a 31-year-old mother of a 6-year-old boy -- have a long road to recovery. Villanueva said Saturday both deputies were sworn in just 14 months ago.

As of Monday, no suspects have been identified, despite some online social media chatter to the contrary. The sheriff's department issued a statement early Monday saying the information circulating online "is ERRONEOUS information and there are no named or wanted suspects at this time."

Villanueva told KNX that investigators are "working day and night to identify and arrest these cowards," referencing the gunman and a possible getaway driver.

The county is offering a $100,000 reward for information leading to the gunman. The Board of Supervisors is expected to formally ratify the reward offer at its meeting Tuesday. Villanueva, in a Monday afternoon appearance on KABC radio, said two private donors stepped up to increase the reward offer to $175,000.

The Los Angeles County Metropolitan Transportation Authority announced Monday afternoon it is adding $25,000 to the reward, noting that the deputies were working for Metro's Transit Services Bureau at the time of the shooting.

Villanueva challenged Laker star LeBron James, who has been outspoken on social-justice issues and in support of the Black Lives Matter movement, to double the reward offer.

Anyone with information was encouraged to contact the Sheriff's Department's Homicide Bureau at 323-890-5500. Anonymous tips can be left for L.A. Crime Stoppers at 800-222-TIPS (8477), or at http://lacrimestoppers.org.

The attack occurred at 7 p.m. Saturday at the Metro A (Blue) Line station at Willowbrook Avenue and Palmer Street. Surveillance video shows the suspect approaching the patrol vehicle from behind, walking up to the passenger side of the vehicle, pulling out a handgun and firing through the passenger side window. The gunman is then seen running away.

The shooter was described by the sheriff's department as a "male Black, 28- to 30-years-old, wearing dark clothing, who was last seen heading northbound on Willowbrook Avenue in a black four-door sedan."

Villanueva said his department has been contacted by President Donald Trump and Democratic presidential candidate Joe Biden, and he said the president may reach out to the injured deputies' families. Trump visited northern California Monday to survey wildfire damage.

"Both candidates have done a very good job, been very supportive," Villanueva said. "They set aside their political differences and they both stepped up to the plate and said they're here to support the sheriff's department, and we support their efforts."

Relatives of the injured deputies -- including the husband of the female deputy and the girlfriend and parents of the male deputy -- were at St. Francis Medical Center in Lynwood, where they're being treated.

Villanueva on Monday again lashed out at protesters who showed up at the hospital Saturday night and shouted anti-law-enforcement chants, expressing hope that the deputies die. One witness told ABC7 some protesters tried to force their way into the emergency room while shouting "death to the police."

"They were chanting that they wish the deputies died," Villanueva told KNX Monday. "And I don't even know how to be begin to describe that, other than repulsive, reprehensible."

More video surfaced Monday showing some bystanders at the Metro station taking pictures or video of the wounded deputies after the shooting, and at least in one case, laughing while failing to offer any kind of aid.

County Supervisor Kathryn Barger didn't mince words Monday about her disgust with the hospital protests. She suggested the shooting was the culmination of "anti-law-enforcement rhetoric expressed by many elected officials, community leaders and others," leading to the creation of a "toxic environment amid a time of civil unrest."

The shooting came on the heels of a series of combative protests outside the sheriff's South Los Angeles station, with demonstrators condemning the Aug. 31 fatal shooting by two sheriff's deputies of 29-year-old Dijon Kizzee in the Westmont area. Those demonstrations led to more than three dozen arrests, with the protesters accusing deputies of using excessive force and Villanueva saying demonstrators triggered the violence by hurling objects at sheriff's deputies.

Following the Saturday night shooting, county Supervisor Janice Hahn was among those pleading for calm in the community.

Also in the aftermath of the shooting, Villanueva and the sheriff's department are taking criticism over the arrest of a KPCC/LAist reporter while deputies were working to quell the protest outside the hospital. Video from the scene showed deputies pinning reporter Jose Huang to the ground and arresting her.

The sheriff's department claimed she didn't have proper media credentials and was "interfering with a lawful arrest." Villanueva later doubled down on that contention, saying Huang got "right up on the shoulder" of a deputy trying to make an arrest, and saying her actions were more "activism" than journalism.

Video from Huang's cell phone has since surfaced, appearing to contradict the department's description of events. KPCC reported that the video shows Huang repeatedly identifying herself as a reporter, shouting "KPCC," and saying, "You're hurting me" and crying out in apparent pain.

Inspector General Max Huntsman is opening an investigation into the incident.