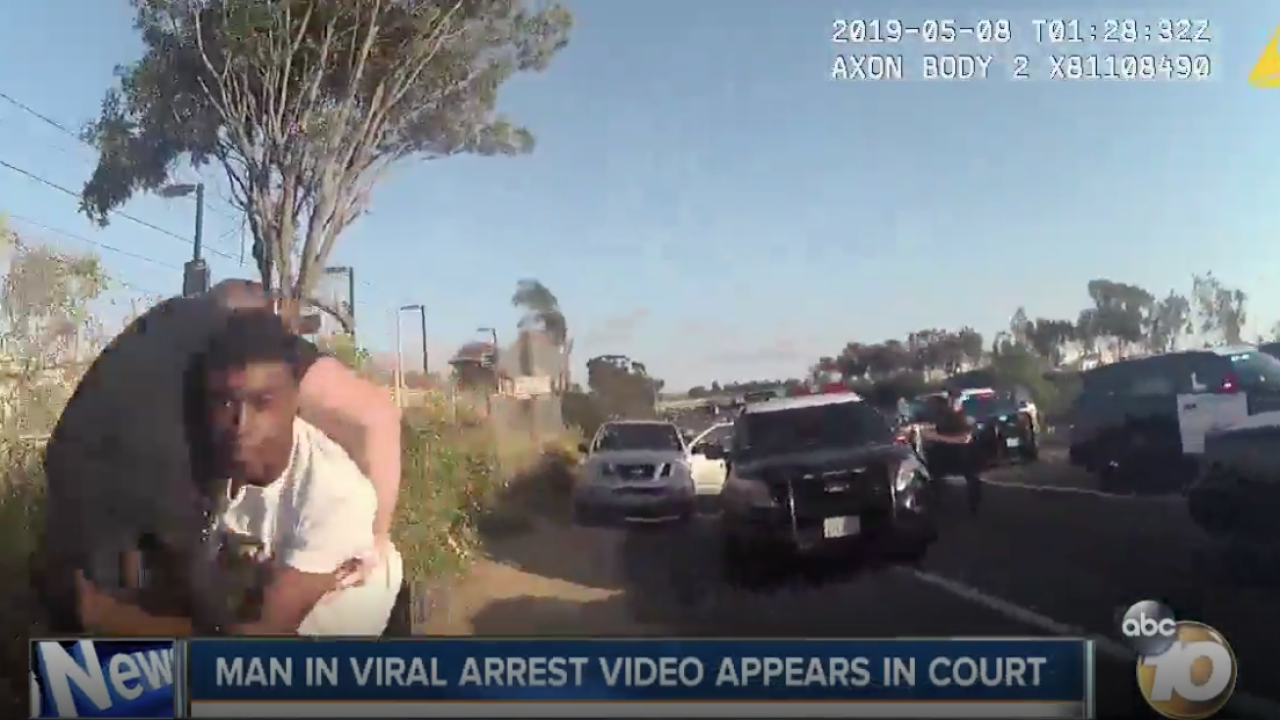 SAN DIEGO (CNS) - A young man who was seen being repeatedly struck by San Diego police officers in a widely viewed social-media video was sentenced to four years and four months in prison Friday for resisting arrest and unrelated robbery and burglary cases.

Trenelle D. Cannon, 20, pleaded guilty last month to charges stemming from a video clip showing a group of officers punching him during a struggle on a South Bay roadside in early May. The 12-second video sparked public debate, with critics saying the officers used excessive force in arresting Cannon. Cannon pleaded guilty to resisting arrest for the confrontation, as well as robbery in an unrelated San Diego case stemming from 2017, in which prosecutors said he stole a necklace valued at $1,000 from someone, then fled from pursuing officers, leaving the chain behind.

San Diego County Superior Court Judge Polly H. Shamoon granted a defense request to recommend that he participate in a fire camp program during his incarceration.

"I certainly hope, sir, that you pick up some skill there (in fire camp) that you're going to take with you when you get out of custody,'' Shamoon said. "This is a lot of cases, a lot of crimes for somebody your age, sir, and I hope that fire camp helps you get on the right track.''

Cannon's attorney and a group of family members present during the sentencing hearing declined to comment regarding the plea and sentence. In the wake of the video's dissemination online, police said the officers were attempting to arrest Cannon for outstanding felony warrants and alleged Cannon tried to flee from officers and tackled one lawman to the ground prior to the events shown in the video.

San Diego police Chief David Nisleit defended the officers in a news conference shortly after the video surfaced, saying the blows were "distraction strikes'' and necessary under the circumstances. ``We hear and understand the community's concerns about the video being shared on social media,'' Nisleit said. "However, this video does not provide context of what led up to the struggle with Mr. Cannon.''

The scuffle erupted about 6:30 p.m. May 7, after Cannon ran from officers who tried to take him into custody on outstanding robbery and gun- violation warrants in the 600 block of E Street in Chula Vista, police said. The officers found a loaded pistol abandoned in the area they had seen the suspect, Nisleit said.

The suspect got into a car occupied by four other people and was driven off as officers gave chase and sought to pull over the vehicle, police said.

The driver yielded near an Interstate 5 on-ramp and one officer approached a passenger door next to where Cannon was seated. At that point, police said Cannon burst out of the vehicle and tackled the patrolman, prompting several other officers to pile onto Cannon as one of his companions videotaped the unfolding fracas from inside the car.

"Believing Cannon possibly had another weapon, responding officers used a combination of physical force and distraction strikes to take him into custody while continuously giving him orders to surrender,'' Nisleit said.

"Cannon refused to cooperate and struggled to keep his hands in front of his body. At one point, he pushed up against an officer's gun belt.'' Cannon's friends and family disputed the department's account in a separate news conference.

Cannon's girlfriend, Shakira Smith, said that once their car was stopped, Cannon opened the car door and was yanked out of the vehicle by officers in an unprovoked manner, at which point the officers "dogpiled him,'' and began punching and choking him.

Nisleit said the officers used no more heightened force on Cannon once he finally was in custody, and neither the suspect nor the involved officers suffered any serious injuries during the arrest.