What went wrong with the polls in 2020

Despite fixes after 2016, polling error grew 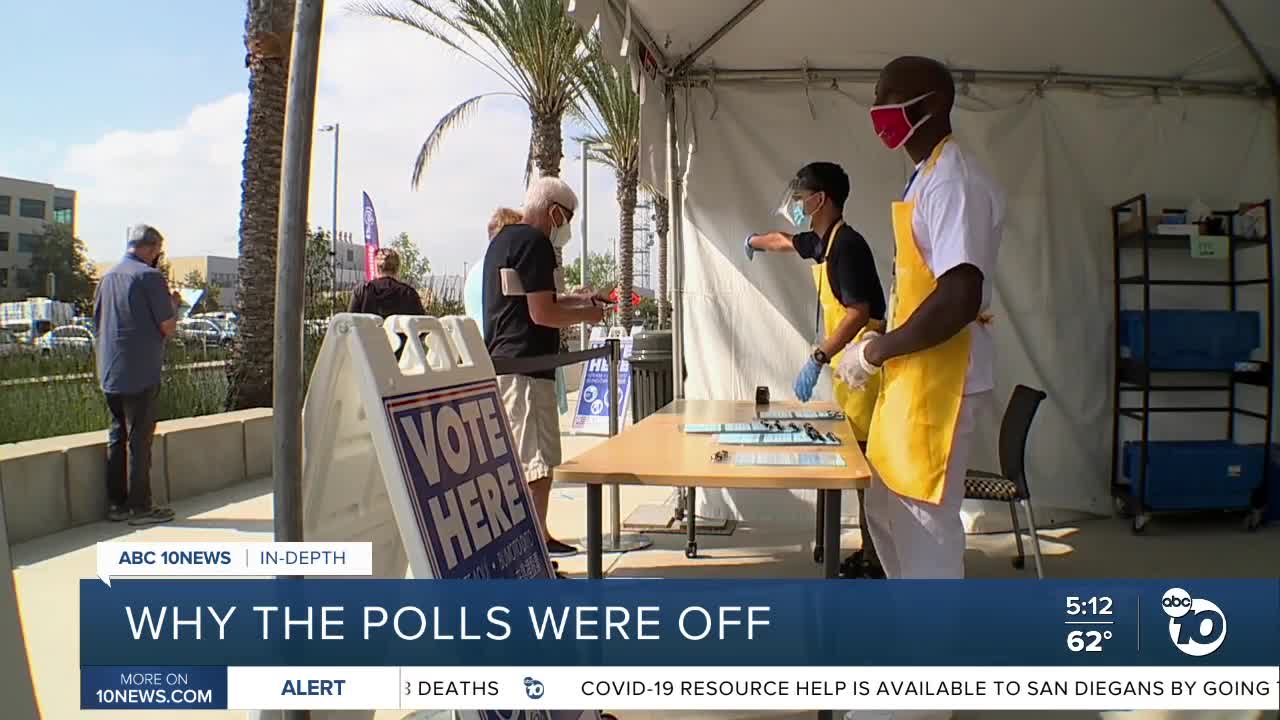 As states continue to count votes, one thing is clear: the pre-election polls were off again.

SAN DIEGO (KGTV) — As states continue to count votes, one thing is clear: the pre-election polls were off again.

Pollsters underestimated support for President Donald Trump by a wider margin than they did in 2016, prompting a number of theories about what went wrong and why changes adopted after the 2016 election proved ineffective.

Heading into Election Day 2020, candidate Joe Biden led Trump nationally by an average of 8.4%, according to FiveThirtyEight’s polling average. We won’t know the final margin until all the votes are counted, but it looks like Trump’s support was underestimated by about 3.5%.

That’s wider than the national popular vote miss in 2016, when the polls underestimated Trump’s support by 1.1%.

“Polling emerged from 2016 with a black eye. This is fair to say a second black eye in 2020,” said Jay Leve of polling firm SurveyUSA.

Leve said the industry thought it had corrected its 2016 mistakes. Polling in the 2018 midterms was very accurate.

In 2020, pollsters made sure to weigh for education level and include enough non-college-educated white voters to try to capture a representative sample of the electorate.

“While pollsters attempted to correct for the mistakes that they made in 2016, President Trump was busy hammering home a narrative that, number one, the media is the enemy of the people. And number two, polls are fake polls,” Leve said.

Leve thinks that skepticism and distrust caused Trump supporters to ignore pollsters at a higher rate, causing them to be underrepresented in samples.

“Between mail-in balloting, the pandemic, between all the early voting and all the confusion it creates, it’s possible some of that played a role in creating the error we saw this time,” he said.

Goggin said the pandemic may have made the models used to predict voter turnout less accurate this cycle. Many surveys heading into the election showed an unusual trend: Biden was polling better among so-called “likely voters” than among registered voters overall. Typically Republicans hold an edge among likely voters, Nate Cohn of the New York Times noted.

There’s also some early data suggesting once the pandemic hit, Democrats started responding to surveys more frequently, something that could have shifted the poll numbers.

There may have also been issues surveying certain demographic groups. Pre-election polls showed Biden chipping away at Trump’s lead with seniors compared to 2016, but Biden actually did worse than Clinton with that demographic in certain key states.

Trump’s support among Hispanic voters in Florida also surprised pollsters. If exit polling data shows that trend continued in other states, it might explain about one-quarter of this year’s polling error, according to the New York Times.

“Many of these errors are fixable when they find out what went wrong and you can still get high-quality samples,” Goggin said.

Pollsters are planning to do detailed autopsies on the election once they have final turnout data and results by precinct. Polling firms will eventually post detailed data from their results to the Roper Center for more finely tuned analysis.

ABC 10News used SurveyUSA this election cycle to poll 11 state and local races. The final polls accurately predicted the winner in all 11 races, although the margins weren’t perfect.

The ABC 10News/Union-Tribune scientific polls actually overestimated Trump’s support in California by about 4 points, relative to vote totals as of November 12.