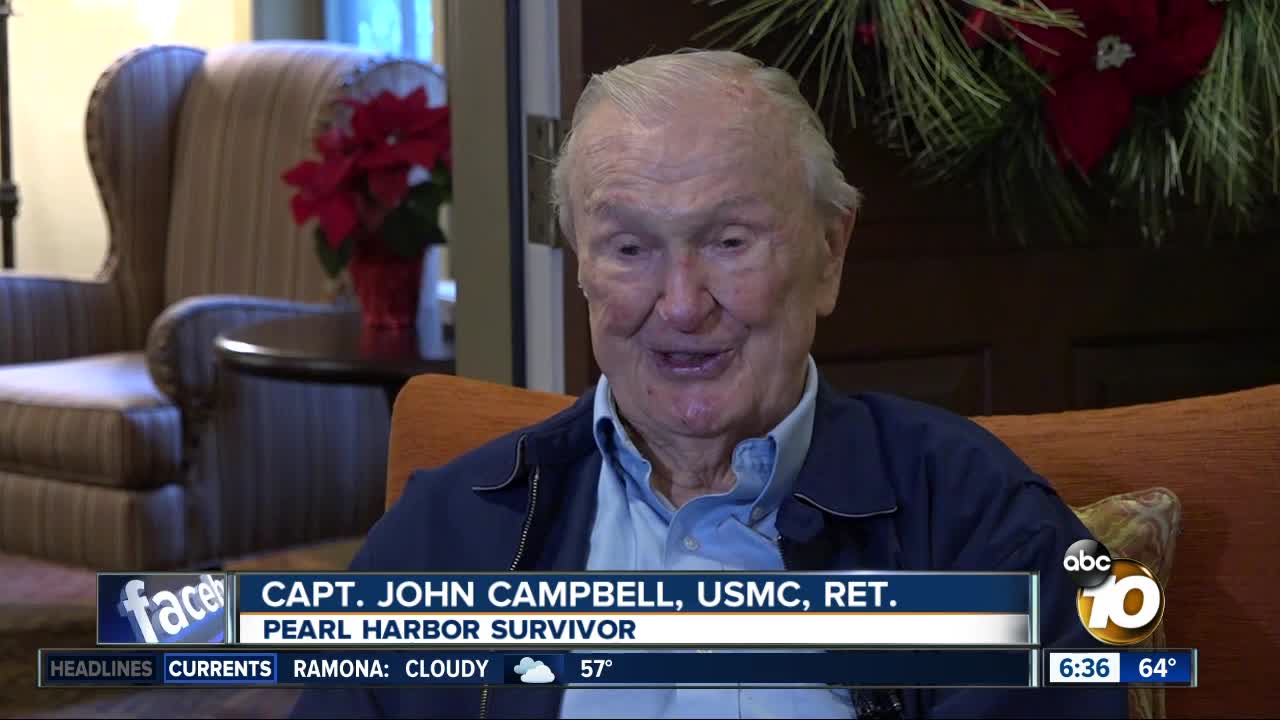 The oldest San Diegan to survive the Pearl Harbor attack was honored and also shared his memories.

SOLANA BEACH, Calif. (KGTV) — A 99-year-old local man who survived Pearl Harbor was honored this week and shared his memories about the attack.

Retired Marine Corps Captain John Campbell, 99, was honored at a luncheon in Solana Beach on Friday where he spoke about the attack 78 years ago.

Campbell, one of only a handful of Pearl Harbor survivors today, recalled the confusion when Japanese planes began bombing the Hawaiian naval base in the early hours of Dec. 7, 1941.

"We thought originally it was the Army-Navy maneuvers ... then we saw our airplanes catch fire," Campbell said. "We had no idea and you're still stunned probably to the next day trying to figure out what it is."

The surprise of the attack levying everyone on the Hawaiian base overwhelmed and anxious.

"The first night in Pearl Harbor, you didn't dare light a cigarette because everyone was so trigger happy and they'd shoot before they even thought about it," Campbell said.

RELATED: Post Office in Poway to be named after Pearl Harbor survivor

The veteran says he was thankful the attack didn't continue further, noting the base would've been incapable of fighting back at that point.

"We had no airplanes. The ships were out of duty ... they were still burning," Campbell said. "Those carriers are like cities, when they go down they can burn for years."

Campbell recalls facing the enemy in the surprise raid.

"It was 8 o'clock sharp and they made four runs on us ... You could see the gold in their teeth, they were smiling," Campbell recalled. "And we didn't know what the hell was happening."

Campbell's family wouldn't know whether or not he survived the attack for two days.

"It took me two days to get through [to my family]," Campbell said. "Everyone was pretty jumpy for a week or so. They thought that the Japanese were going to follow up on their attack."

Since the attack, Campbell says he's lived a fulfilling life working in various executive positions at ABC stations and owner of amusement parks in Florida.

"I've been lucky all my life ... I even became the president of a television network. I owned my own theme parks ... I can't complain. I really had a fantastic life," Campbell said.

Campbell was one of around 50,000 service members who were at Pearl Harbor during the attack. More than 2,400 Americans were killed during the raid that prompted the U.S. to enter World War II.

"The service is a camaraderie. Especially when you're under fire you're really close to your buddies. That's when you're counting on each other," Campbell said.