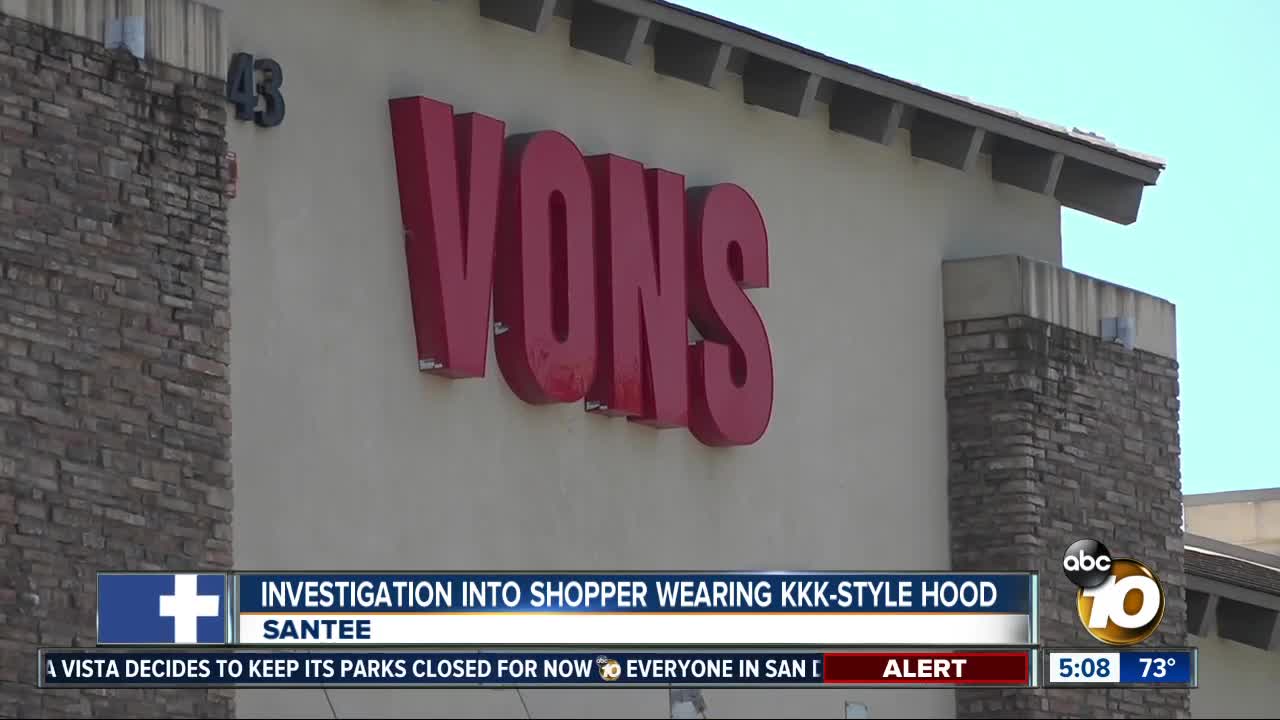 SANTEE, Calif. (KGTV) — Outrage continues to grow over a shopper at a Santee Vons who appeared to be wearing what resembled a KKK-style hood.

On Tuesday, the San Diego County Sheriff's Department said detectives identified the man in the surveillance video "and will continue their follow up of the incident."

A sheriff's detective told 10News on Monday that the department had been fielding calls all day from members of the community who were concerned for their safety.

10News is not showing the images that were taken by other shoppers and posted to social media.

“There's no place and no need for people to be acting like that and yes people are fearful,” said San Diego County District 2 Supervisor Dianne Jacob. She called the incident "abhorrent" and an act of "blatant racism".

The Anti-Defamation League denounced the incident and the NAACP San Diego is calling on local law enforcement to investigate and provide a full report to the community.

The San Diego County Sheriff's Department reports that its deputies were not called to the scene at the time it took place but detectives are now looking into it and will pursue criminal charges, if necessary.

On Monday, a spokesperson with Vons referred 10News to the company's statement from Sunday which reads, “At Vons, fostering an environment of courtesy, dignity, and respect is one of our highest priorities, and we work hard to hold everyone in our stores to these standards, including customers. Unfortunately, an alarming and isolated incident occurred at our Vons store in Santee, where a customer chose an inflammatory method of wearing a face covering. Needless to say, it was shocking. Several members of our team asked the customer to remove it, and all requests were ignored until the customer was in the checkout area. This was a disturbing incident for our associates and customers, and we are reviewing with our team how to best handle such inappropriate situations in the future.”

“The message that was sent was an ugly one and that means we must respond but let's put this behind us, too. Let's overwhelm this one ugly incident with love and compassion,” added Supervisor Jacob.

On Monday afternoon, Santee Mayor John Minto reiterated that the city will not tolerate such behavior.

According to the San Diego County Sheriff’s Department, anyone with information on this incident can contact Sergeant Claudia Delgado at 619-956-4050.