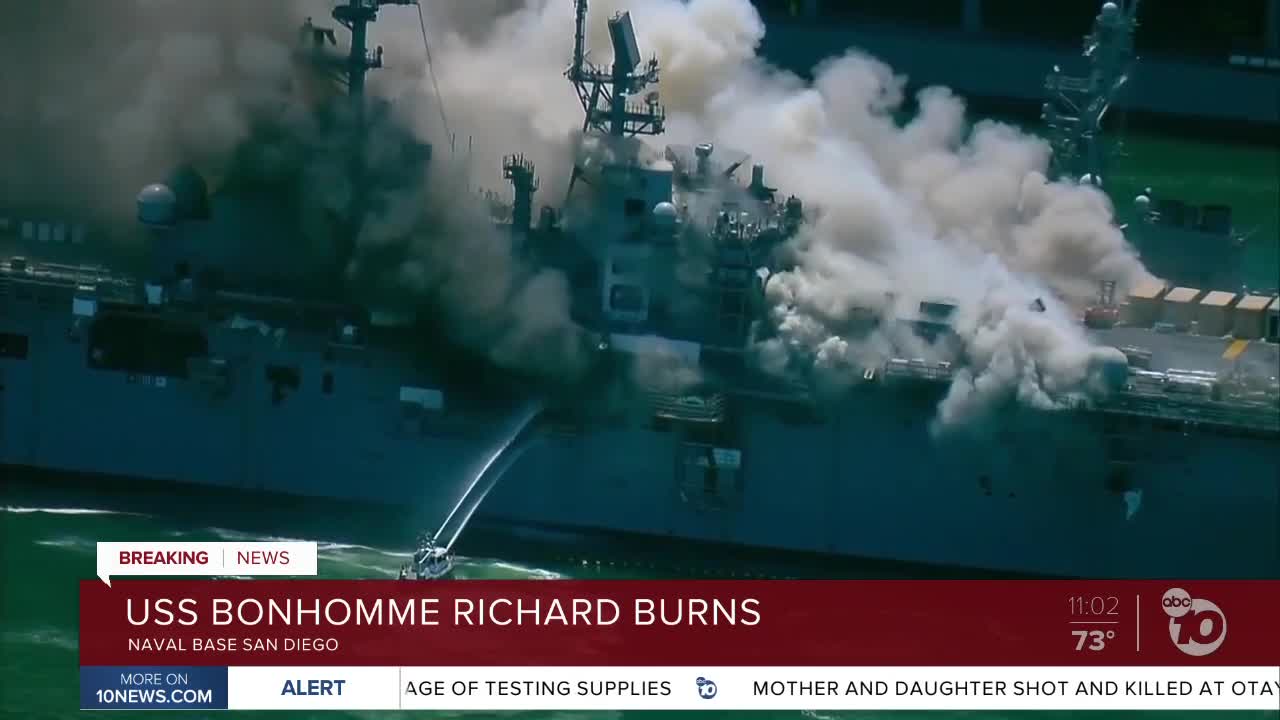 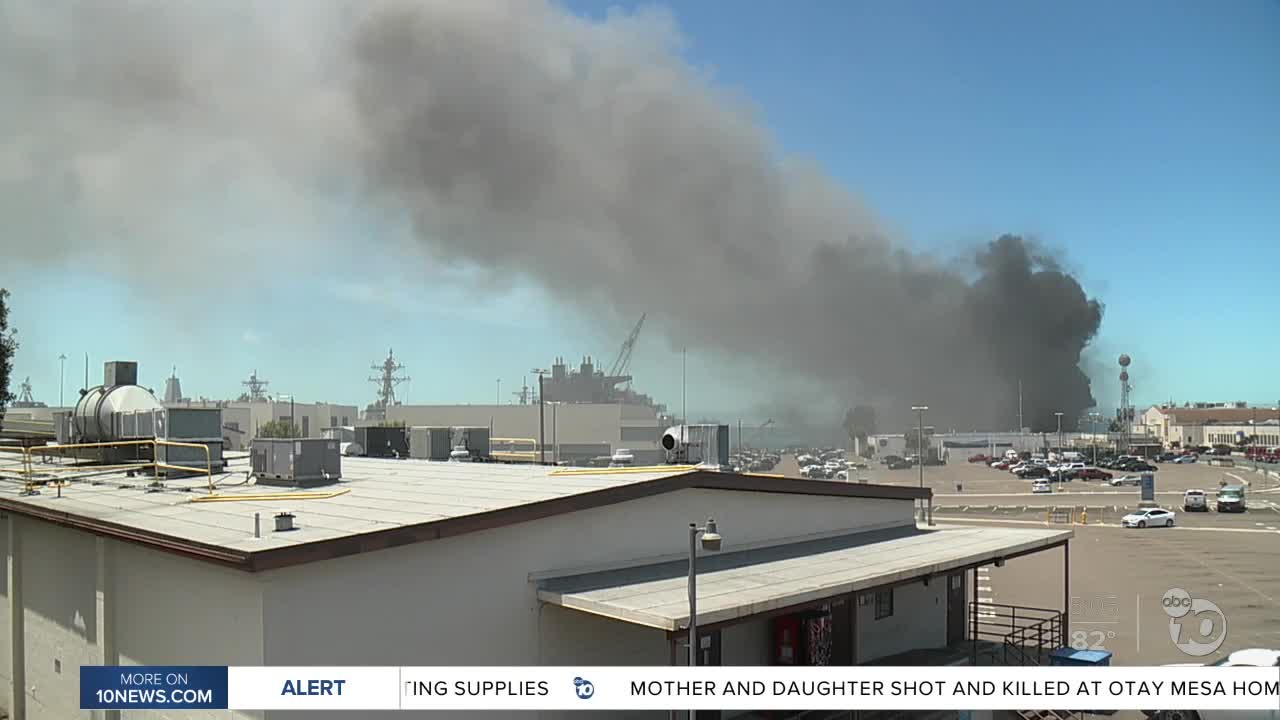 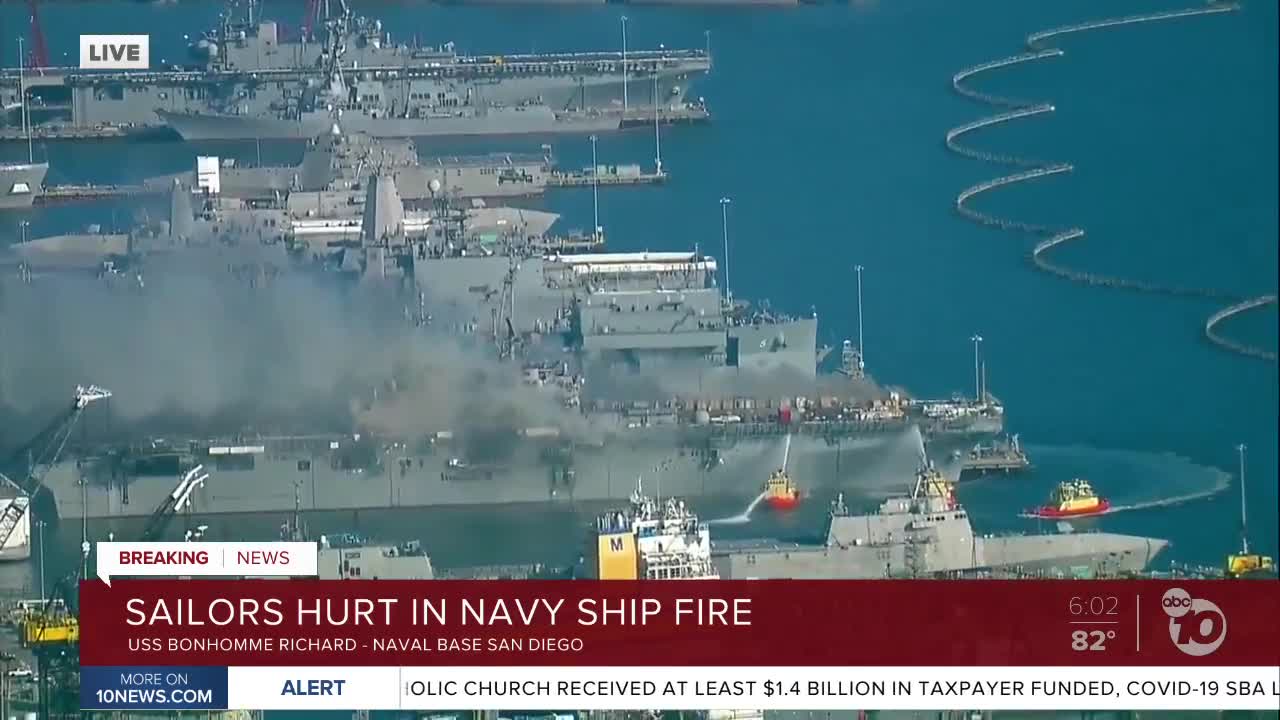 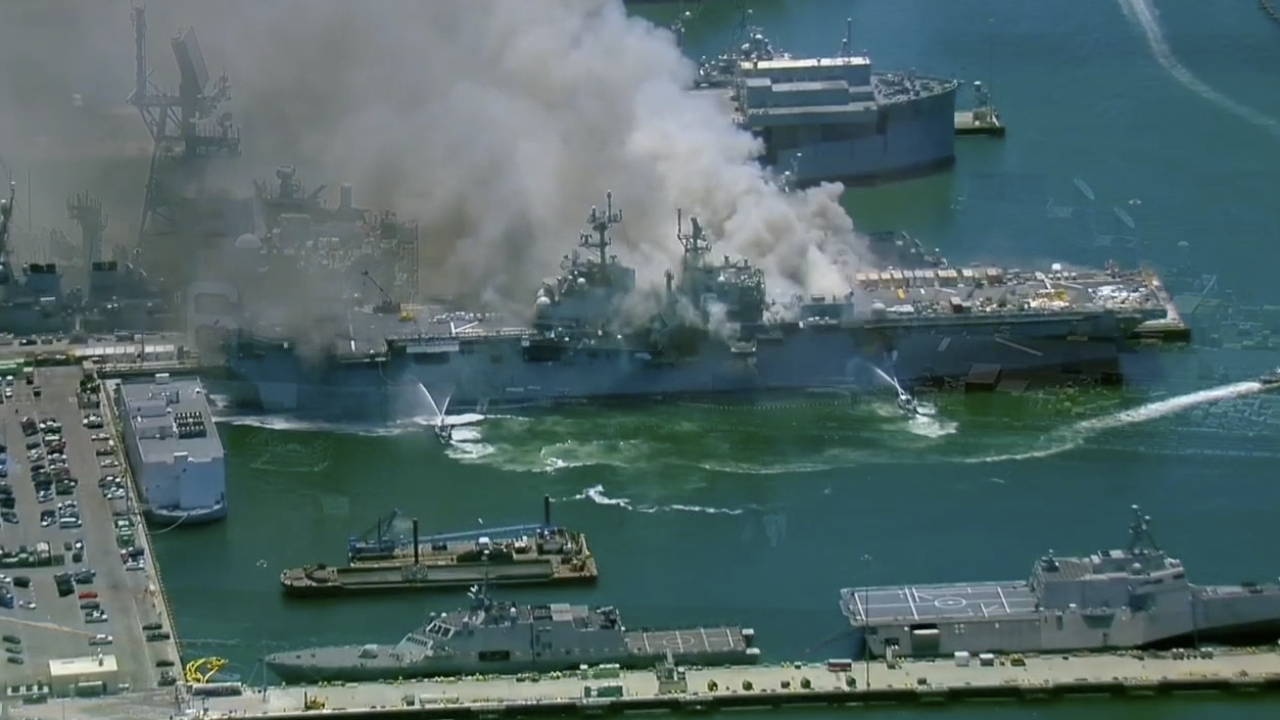 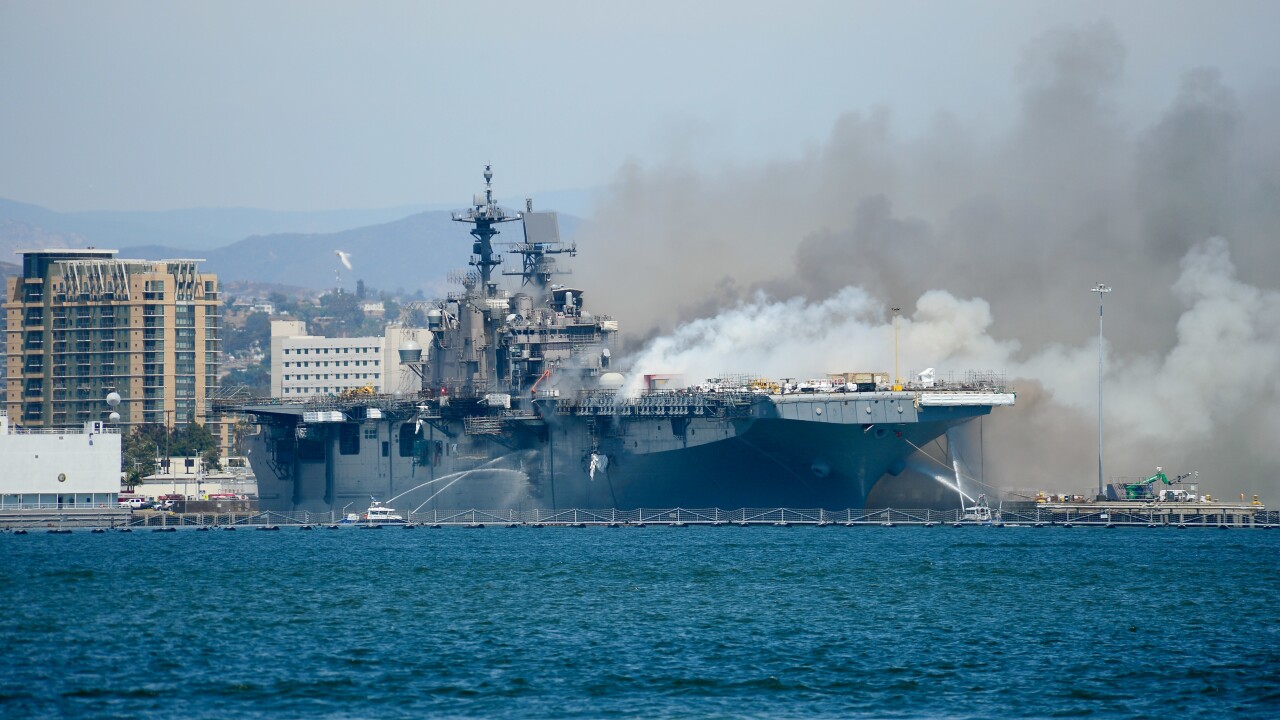 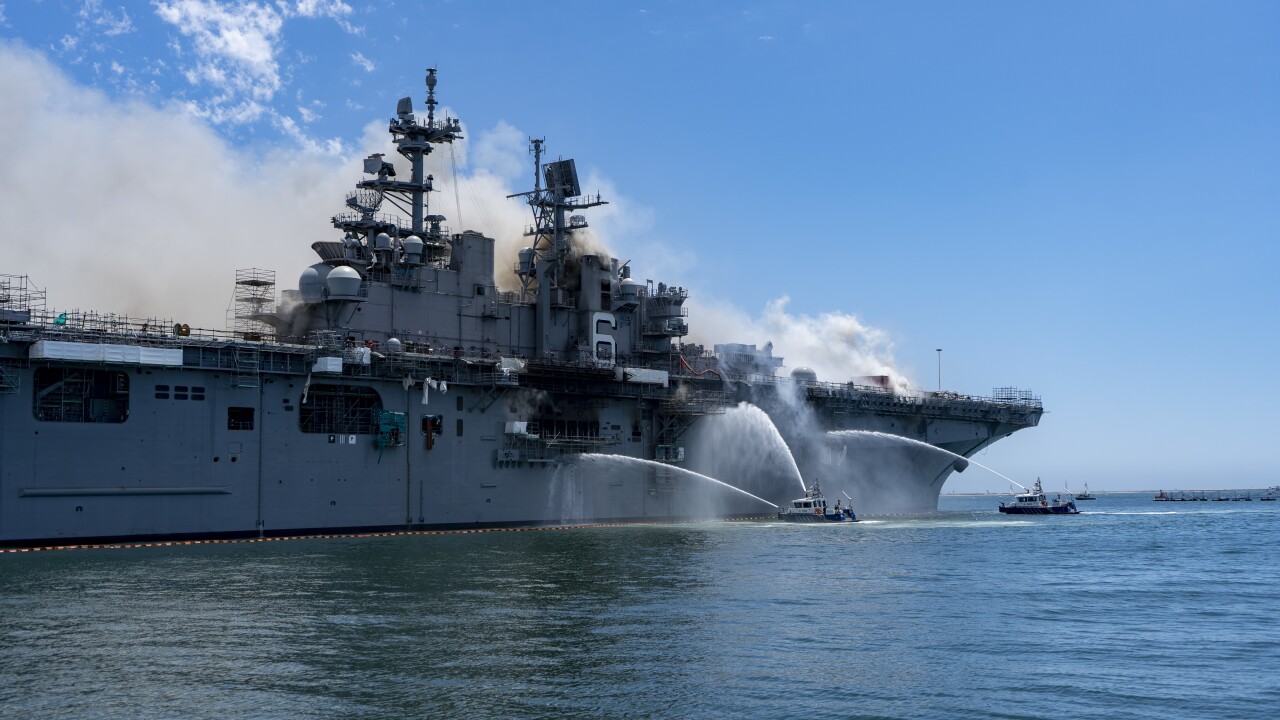 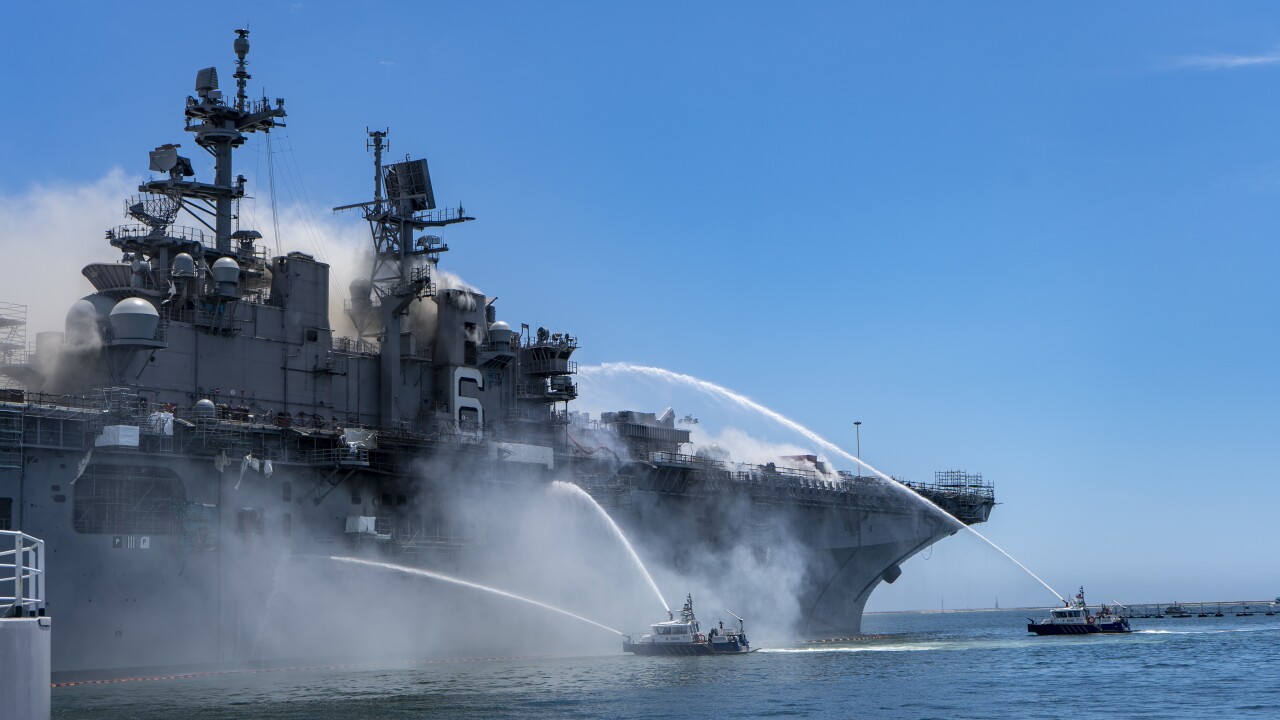 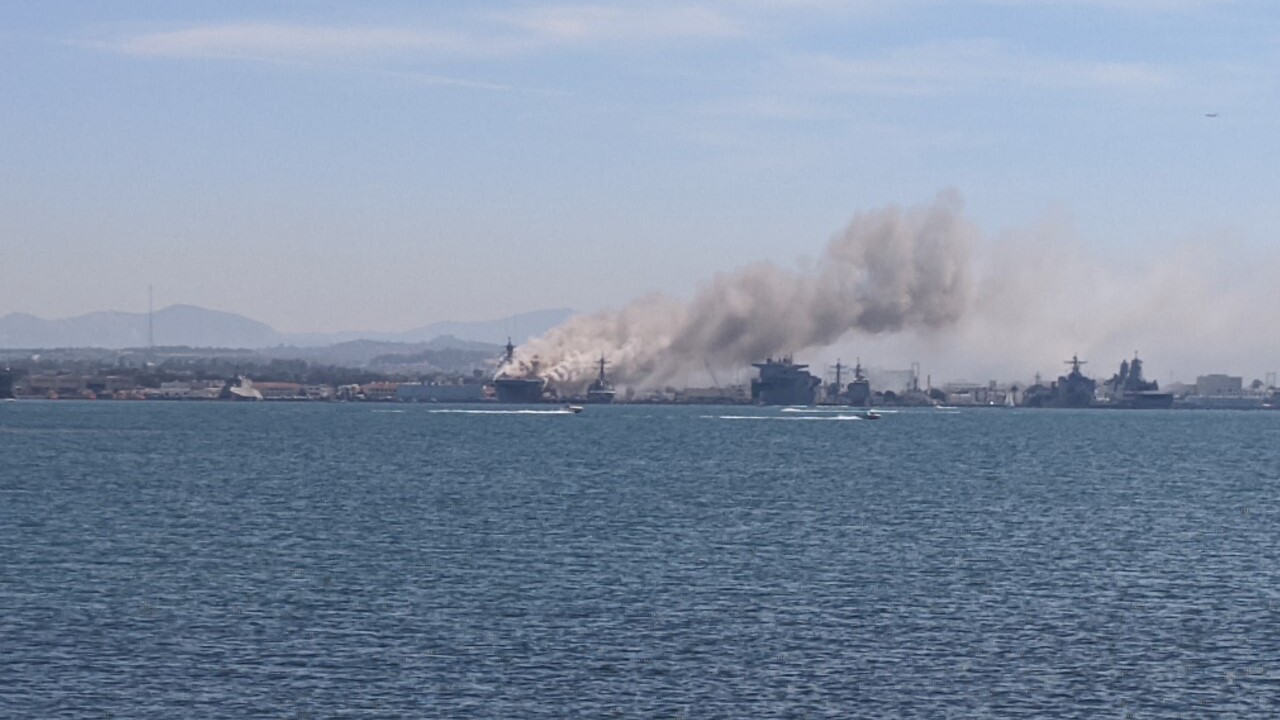 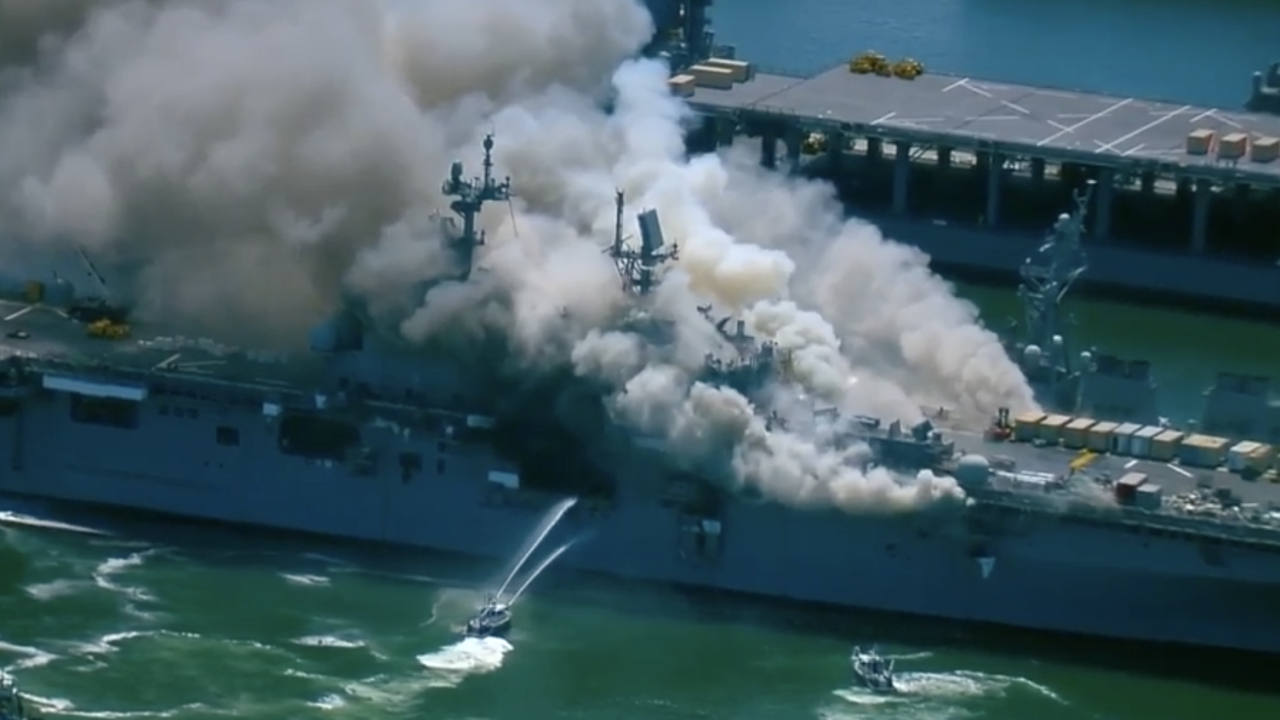 SAN DIEGO (KGTV) - Firefigthing crews continue to battle a massive blaze Monday that erupted inside a ship at Naval Base San Diego, sending large plumes of smoke into the air for hours.

The fire was reported at about 8:30 a.m. Sunday morning aboard the USS Bonhomme Richard at Naval Base San Diego in the 3400 block of Senn Street, according to the Navy.

According to witnesses at the scene, a large explosion on the ship set off the blaze, though fire investigators are still searching for a cause of the fire. Navy Rear Admiral Philip Sobeck said the fire began in the lower cargo hold where Marine equipment is typically held.

The Navy said 17 sailors and four civilians were taken to the hospital with non-life threatening injuries. The sailors are reportedly in stable condition. No condition was immediately provided on the civilians hurt in the fire.

Five remain hospitalized for observation but remain in stable condition, the Navy said.

According to the Navy, 57 personnel, both sailors and civilians, have been treated for minor injuries including heat exhaustion and smoke inhalation.

Watch live video from the fire below:

BREAKING: Multiple agencies are battlng a massive fire aboard the USS Bonhomme Richard at Naval Base San Diego. Several injuries being reported. STAY WITH ABC 10NEWS FOR UPDATES --> https://bit.ly/2OvioAJ

About 160 sailors were aboard the ship at the time of the fire and all sailors have been accounted for and evacuated from the vessel, the Navy says. The USS Bonhomme Richard was undergoing maintenance and normally has a crew of roughly 1,000.

As the fire raged, the USS Fitzgerald shifted to a pier further away from the ship at about 1 p.m. and the nearby USS Russell moved about 30 minutes later as well. All inport ships have been directed to provide fire parties to assist with firefighting efforts, the Navy added.

"Currently there are two firefighting teams fighting the fire aboard the ship," said Federal Fire San Diego Division Chief Rob Bondurant. "Federal Fire is rotating their crews aboard the ship with U.S. Navy firefighting crews from the waterfront to fight the fire in order to, find the seat of the fire and extinguish it. Also, Navy Region Southwest tugs are also continuously combating the fire from the bay."

PHOTOS: Fire erupts aboard ship at Naval Base San Diego

Navy officials said no ordnance were onboard the ship at the time of the fire. A 1,800-yard perimeter has been set up around the ship as crews battled the flames, Sobeck said.

Sobeck added during a 6 p.m. press conference that about a million gallons of gasoline are onboard the vessel — well below the fire — and crews were working all Sunday to prevent the fire from reaching that area of the ship.

Sobeck says sailors ware taught from day one of boot camp how to fight these fires.

Smoke could be seen pouring into the sky just south of downtown San Diego throughout Sunday. ABC 10News crews at the scene are reporting a toxic smell emanating from the blaze.

National City officials advised residents to stay inside and limit their time outside as a safety precaution, due to the potential health impacts of fire's smoke. Heartland Fire Department also warned that that the smell of smoke may be detected in the East County due to the ship fire.

SDFD personnel were instructed to exit the pier. #shipfire pic.twitter.com/vxLFBXHmrs

According to the county's Air Pollution Control District, fine particulates, or PM2.5 concentrations, could reach unhealthful levels in areas that have been impacted by smoke. In areas where smoke is heavy, air quality levels are considered unhealthy for sensitive groups to unhealthy for all individuals. In areas with minor smoke impacts, air quality may range from moderate to unhealthy for sensitive groups. For those who smell smoke, it's recommended they limit physical activity, the agency says.

Despite this, Sobeck said he does not believe residents need to be overly concerned of toxic or hazardous chemicals in the air due to the fire.

Several agencies joined in the fight against the blaze, including San Diego Fire-Rescue, San Diego Harbor Police, and the U.S. Coast Guard.

The USS Bonhomme Richard was commissioned nearly 22 years ago on Aug. 15, 1998. The ship and her crews participated in several operations, including Operation Enduring Freedom which was part of the U.S. response to the Sept. 11, 2001 terrorist attacks on American soil.

Built in Mississippi and named in honor of Benjamin Franklin, the name was derived from his almanac titled"Poor Richard," the USS Bonhomme Richard made San Diego home in 2018.

While the United States Navy continues to effect response actions to quell the fire aboard the USS BONHOMME RICHARD, the United States Coast Guard continues to assess environmental sensitivities and has contracted an Oil Spill Response Organization to preemptively deploy protective boom to guard against any potential environmental concerns. A one-nautical mile safety zone has been established to ensure the safety of the maritime public. Additionally, a one-nautical mile temporary flight-restriction zone from surface to 3,000 feet altitude has been established to maintain the safety of all firefighting aircraft. Neighboring marinas are also currently being advised to utilize protective safety measures. The safety of first responders, protection of the marine environment and the uninterrupted flow of commerce remain the highest concerns to the Coast Guard. Responders will continue to monitor and assess potential environmental concerns and adjust response actions to ensure the safety and security of the maritime public and the marine environment.