SAN DIEGO (KGTV) — Evacuees at MCAS Miramar have circulated a petition at the base after a coronavirus patient was mistakenly reintroduced to those under quarantine.

The petition, which begins by thanking the Centers for Disease Control and Prevention, suggests several actions be taken at Miramar to mitigate the potential spread of the virus.

Samples from three patients brought to UC San Diego Medical Center were not labeled consistently with CDC regulations, leading to results being returned as negative, when in reality, the samples were not tested.

One of those patients ended up testing positive for coronavirus. She was placed under self-isolation at the base before being brought back to the hospital. 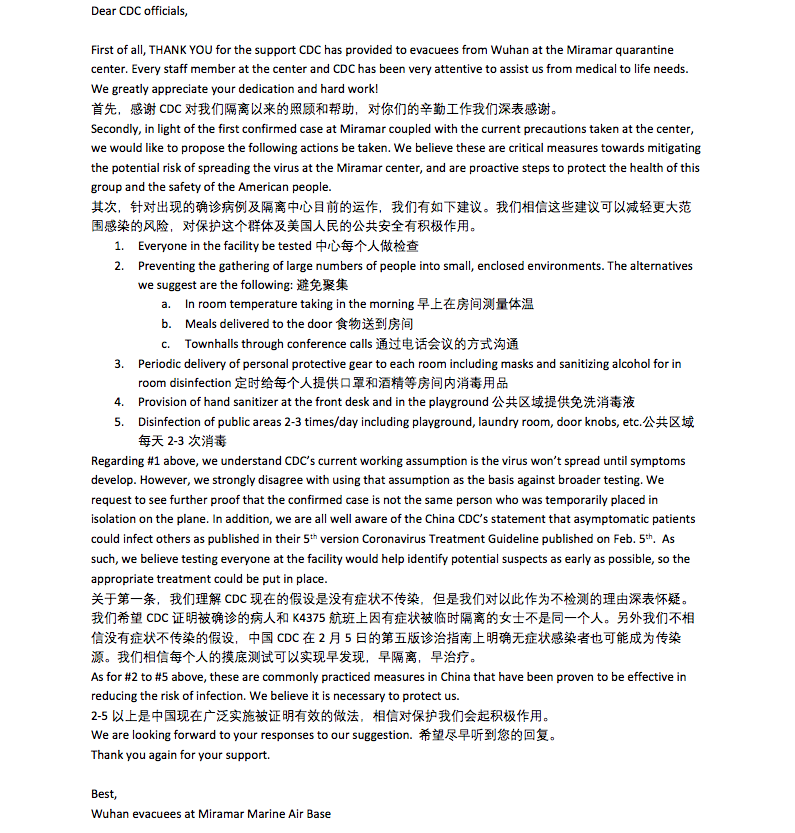 Following the confusion, a petition — written in both English and Chinese by an unknown author — suggested several precautions be taken in the future:

The petition adds that, "CDC’s current working assumption is the virus won’t spread until symptoms develop. However, we strongly disagree with using that assumption as the basis against broader testing ... As such, we believe testing everyone at the facility would help identify potential suspects as early as possible, so the appropriate treatment could be put in place."

The patient who tested positive for coronavirus is said to be doing well at UC San Diego Health. During a press conference Tuesday, officials said there has not been a known breach in the quarantine and there shouldn't be a concern among the general public.

"When you look at the big picture, the community remains safe, the people on the base remain safe, with the exception of one little laboratory piece," one official told the media.