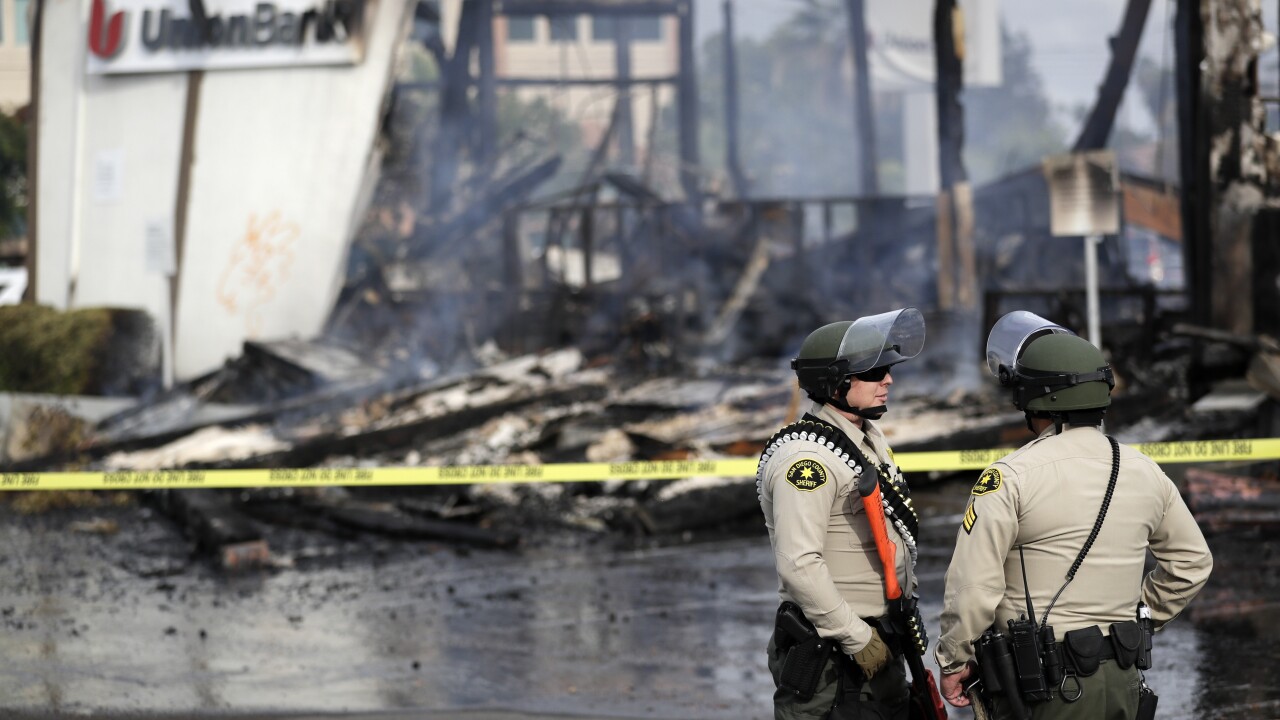 Gregory Bull/AP
San Diego County sheriff officers stand guard in front of a burning bank building after a protest over the death of George Floyd, Sunday, May 31, 2020, in La Mesa, Calif. Protests were held in U.S. cities over the death of Floyd, a black man who died after being restrained by Minneapolis police officers on May 25. (AP Photo/Gregory Bull)

LOS ANGELES (CNS) - Gov. Gavin Newsom said Monday he understands the frustrations of people who have been protesting police brutality across the state, but he lashed out at those who are taking advantage of the unrest to engage in looting.

Newsom also declined to directly respond to comments made by President Donald Trump in a conference call with the nation's governors Monday morning, in which the president called many of their responses to protests "weak."

"I have a choice. We all have a choice," Newsom said. "I can be part of the daily back and forth in the news cycle, and to continue to perpetuate the problems that persist in this country. I can choose to go back and forth and just be another voice in that cause. Or I can choose to focus a message that I think is so much more powerful that I hope has more resonance for people watching, and that is I care more about them than some of the noise I heard on a morning phone call."

Newsom expressed solidarity with protesters and their call for change in a system that has failed communities for generations.

"The black community is not responsible for what's happening in this country right now. We are," he said. "Our institutions are responsible. We are accountable to this moment."

RELATED: La Mesa community comes together to clean up downtown after Saturday riots

But he said he had no patience for those who are taking advantage of the protests to engage in lawlessness.

"When you're out there to exploit conditions, not advance the cause of justice -- that is not serving the greater good," he said. "And we need to also call that out. The looting, the violence, the threats against fellow human beings -- that has no place in this state and in this nation. We as a society need to call that out."

He said another 1,100 members of the National Guard have been called up to assist cities across the state cope with the protests and violence, bringing the total to about 4,500. But he said the state and nation as a whole need to do more than just respond to the protests on the streets.

"We are committed and resolved to bringing peace back to the streets, not only in the state but supporting efforts all across this nation," he said. "But it's not just a situational moment. we have to focus on the medium and long-term and we have to prove our commitment and our resolve in that space."