Petco Park to welcome back fans

SAN DIEGO (KGTV) — California will allow its theme parks and sports venues to reopen with modifications beginning on April 1 for counties in the red tier of its color-coded reopening blueprint.

The state Department of Public Health announced the updated guidance on Friday, allowing theme parks to reopen at 15% capacity once the county it resides in reaches the red reopening tier. That capacity limit would increase as a county's tier status improves to orange and yellow.

Theme park attendance will be limited to California residents, according to state officials. In the red tier, small groups with a maximum of 10 people or three households with no intermixing will be allowed. The red tier also permits indoor capacity at 15% with time restrictions and weekly worker testing. Tickets can only be purchased online as well.

TIMELINE: A look at Disneyland throughout the coronavirus pandemic 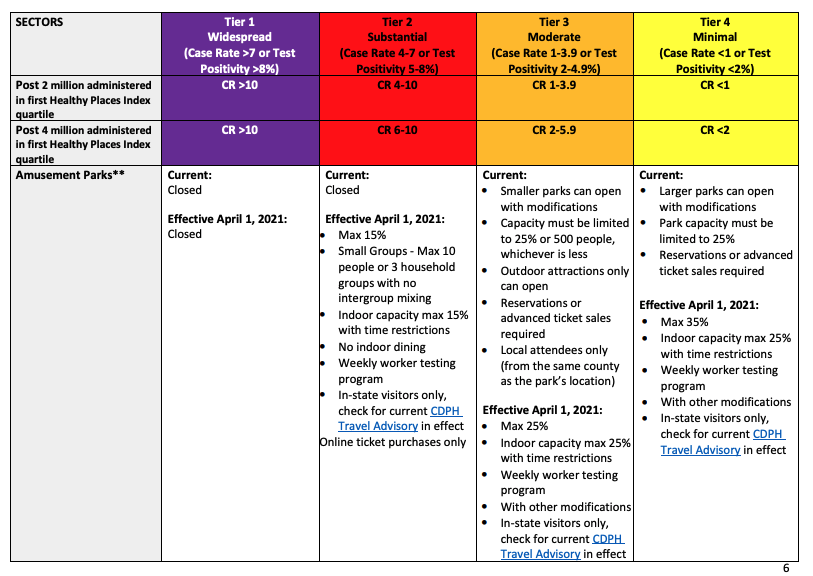 For sports stadiums and live event venues, like Petco Park, capacity will be capped at 100 people or fewer in the purple tier and 20% in red tier counties starting April 1, this includes suites with 25% occupancy per suite and suites with no more than three households. (Listed under the last section below.) 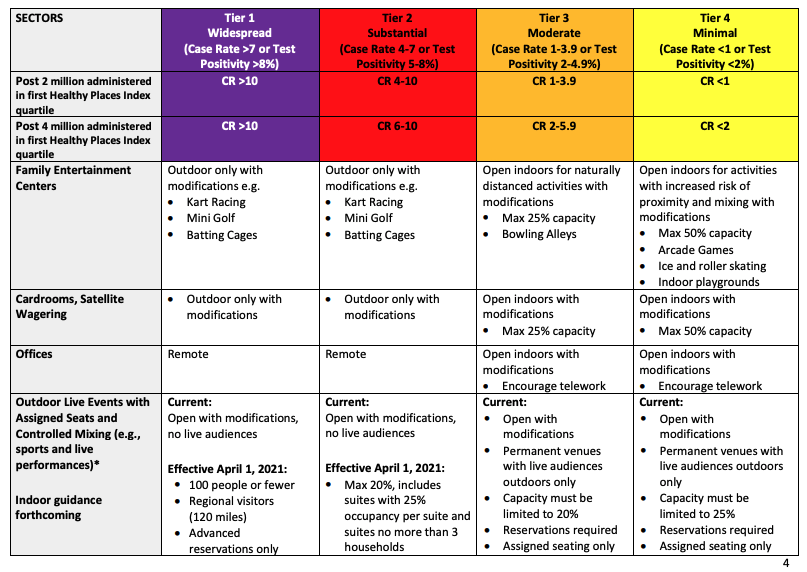 Once counties progress to the orange tier, capacity limits for both theme parks and live event venues would increase to 25% and also allow more indoor operations.

"This is another strong step forward in our COVID recovery. We have worked hard to get to this point and this new State guidance will deliver a safe return to having fans at Padres games, outdoor concerts, and amusements parks," a statement from Fletcher said.

RELATED: California to ease tier guidelines for counties based on vaccine equity

Padres CEO Erik Greupner issued a statement, saying in part that the team is ready to bring in a limited number of fans starting on opening day:

"Our number one priority is providing our fans with a safe and fun experience when they return to the ballpark. We have been diligently preparing to ensure that Petco Park is one of the safest places to be in San Diego this season. We expect that Padres fans will be able to support our team in-person beginning on Opening Day and our players are eager to have them back at Petco Park. We will communicate with our season ticket members soon regarding the details of their return to Petco Park."

The team's statement added that Padres season ticket members will get priority access to 2021's limited seating offered at home games, and because of that. "fans hoping to attend games this season are strongly encouraged to become a Padres member."

Disneyland President Ken Potrock said a reopening date would be announced soon, but that the park is just happy to have a path toward reopening established.

"We are encouraged that theme parks now have a path toward reopening this spring, getting thousands of people back to work and greatly helping neighboring businesses and our entire community. With responsible Disney safety protocols already implemented around the world, we can't wait to welcome our guests back and look forward to sharing an opening date soon."

San Diego County is currently in the purple tier of the state's reopening blueprint but may move to the red tier soon, potentially reopening places like SeaWorld San Diego, Aquatica, Legoland California, and Belmont Park.

Under California's updated tier guidance, counties can move from the purple to red tier with a case rate of 10 cases per 100,000 people once two million vaccinations are reached in the state's most vulnerable areas. State Department of Public Health Secretary Dr. Mark Ghaly says the state should reach that benchmark in the next week or two. San Diego County last reported a 10.8 case rate.

Bars, breweries, and distilleries also remain closed until a county reaches the orange tier under the state's guidelines. Restrictions on hotels and lodging, gyms and fitness centers, and indoor dining were not changed by Friday's updated guidance.

Are you planning to head to a theme park or stadium once they reopen in California? Share your thoughts on ABC 10News' Facebook page below: