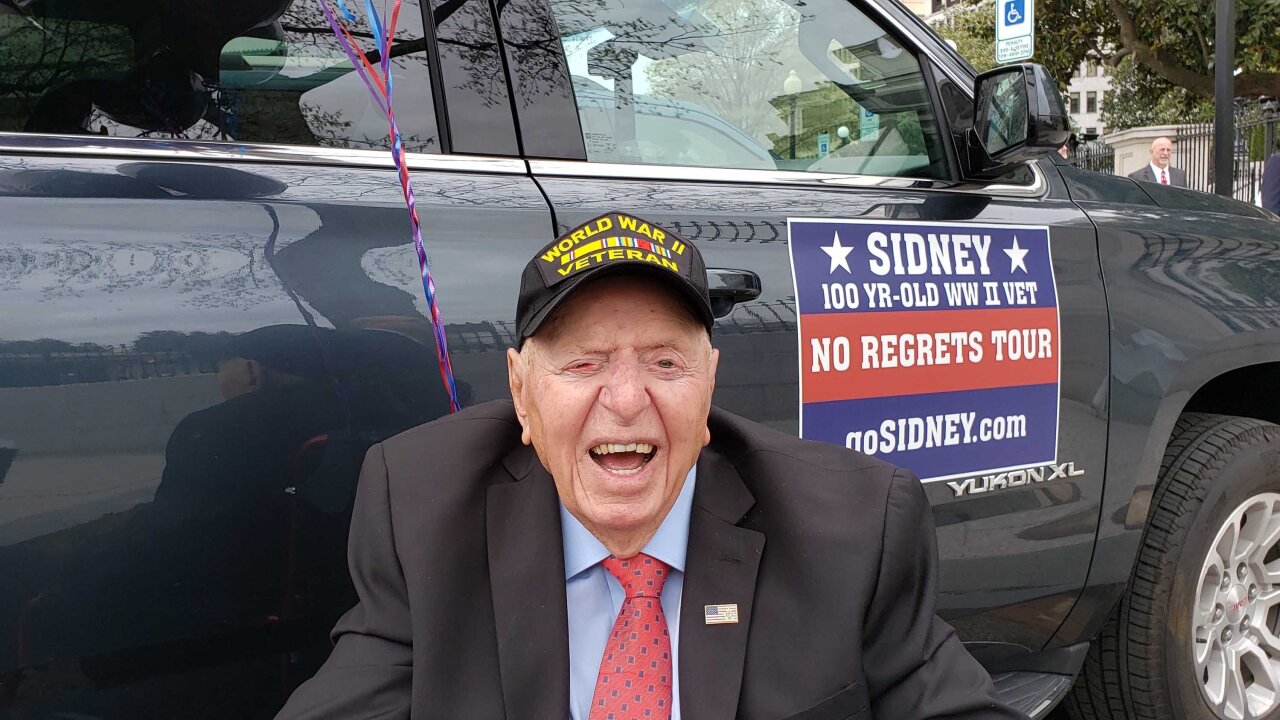 (CNN) -- When a World War II veteran turned 99, he had one regret. He had an opportunity earlier in life to meet some of the last living Civil War veterans, but he didn't go.

Now 100-year-old Sidney Walton is giving people across the country the chance to meet one of the last living World War II veterans.

Walton has been on a mission to visit all 50 states over the past year and a half, and he passed the halfway mark earlier this month. He's made it to 26 states, meeting with governors and anyone who will hear his story.

He wants people he meets to remember the sacrifice World War II veterans made, especially as there aren't many left. Fewer than 400,000 of the 16 million Americans who served in World War II are alive, according to US Department of Veterans Affairs statistics.

In April 2018, Walton started sharing his message. He decided to leave his home in San Diego and meet with governors of each state as a way to reach a large number of people.

He first met with Rhode Island Gov. Gina Raimondo and would hit 25 more over the next 18 months, ending with Maryland Gov. Larry Hogan. He calls it his "No Regrets Tour."

"We're going to complete this tour," Paul Walton, Sidney Walton's 64-year-old son, told CNN. "We have 24 more governors to go and we're going to do it, as they say, 'Come hell or high water.'"

When Sidney Walton was 21, he left college in New York City to join the US Army.

At first, he was trained in chemical warfare and was sent to get a degree in chemical engineering from Virginia Polytechnic Institute, now known as Virginia Tech. He never had to use those skills, though.

He later was sent to India and served in the China-Burma-India Theater as a corporal, which some call the forgotten theater of the war.

Paul Walton said this tour is meant to keep the memory of veterans alive and remember their sacrifices. He believes in the message his father is sharing so much, that he gave up his job to travel with him.

The journey isn't always easy. At 100 years old, the amount of traveling and planning can be difficult. Paul Walton said all their plans are made a month in advance at most. They never know what could happen, but they hope to finish the tour in style.

They drive a rental car with a magnetic sticker that tells people Sidney Walton, a 100-year-old World War II veteran, is inside. The two have big dreams of getting a large campaign bus to travel through the remaining states so everyone knows that Sidney is there.

"We want everyone in the next 24 states to know that Sidney is on his way," Paul Walton said. "He's going to accomplish this mission like he always has all of his life."