Hurricane Lane unleashes rain as it shifts closer to Hawaii 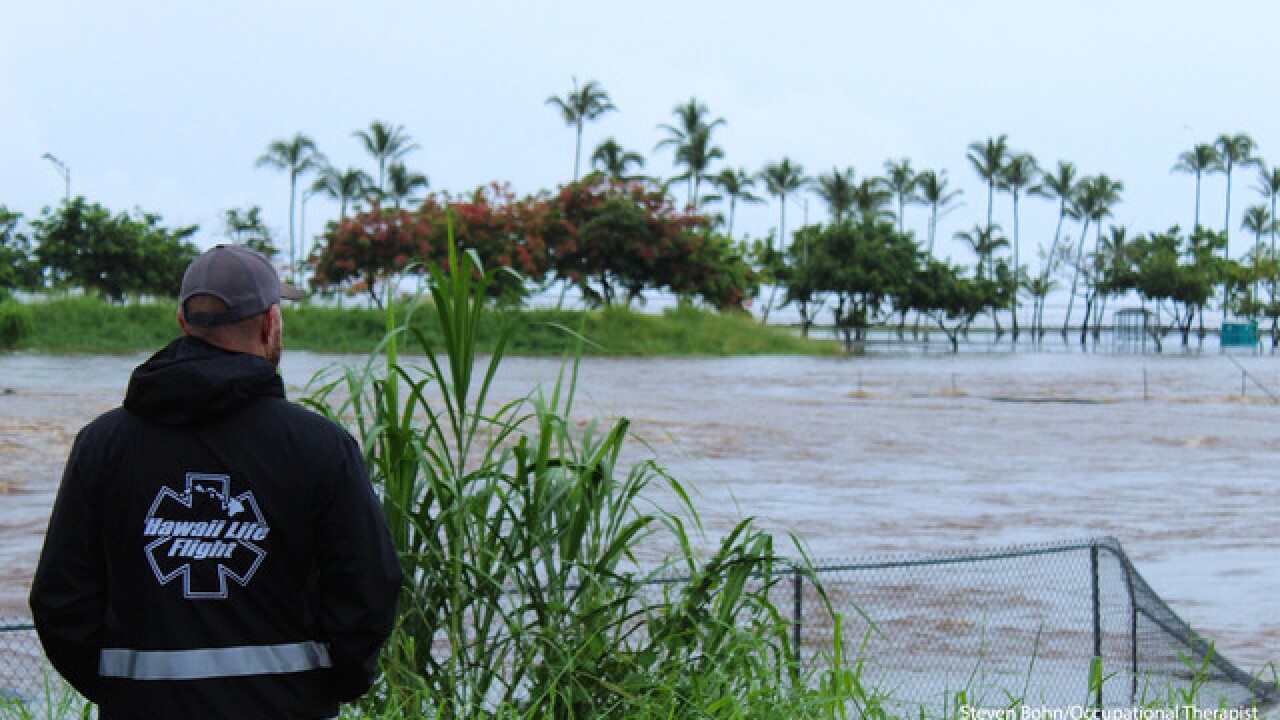 HONOLULU (AP) — Hurricane Lane soaked Hawaii's Big Island on Thursday, dumping nearly 20 inches of rain in nearly 24 hours as residents stocked up on supplies and tried to protect their homes ahead of the state's first hurricane since 1992.

The National Weather Service warned that Lane will get "perilously close" to Hawaii and that some areas could see up to 30 inches (about 80 centimeters) before the system passes.

Lane was not projected to make direct hit on the islands, but officials warned that even a lesser blow could do significant harm.

"You do not need a direct strike to have major impacts from a hurricane this strong," said Steve Goldstein, a meteorologist at the National Oceanic and Atmospheric Administration in Washington.

The center of the Category 3 storm was predicted to move close to or over portions of the main islands later Thursday or Friday, bringing dangerous surf of 20 feet (6 meters) and a storm surge of up to 4 feet (1 meter), forecasters said. As of 11 a.m., the hurricane was about 275 miles (460 kilometers) south of Honolulu.

Lane "shifted a little closer to the islands, unfortunately," meteorologist Melissa Dye said. "Big Island and Maui are in the thick of it now."

As Lane moved closer to the islands, it was expected to weaken more rapidly and turn toward the west. But it was unknown exactly when that would happen, forecasters said.

Pablo Akira Beimler, who lives on the coast in Honokaa on the Big Island, said the road to Hilo was cut off due to landslides.

"Rain has been nonstop for the last half hour or so and winds are just starting to pick up," Beimler said as he posted videos of trees being blown sideways. "Our usually quiet stream is raging right now."

He said staying put is about the only choice he has.

"We essentially have one way in and out of our towns so sheltering in place is the priority," Beimler said in a Twitter message.

Two campers were reported trapped overnight in Waipio Valley, along the Big Island's northern coast. The campers called authorities Wednesday, but emergency crews could not mount a rescue operation.

"We can't go in because the roads — there's a river of water down there," said Hawaii County Managing Director Wil Okabe. Landslides had closed some roads.

In addition, there were reports of boulders falling into a park in Hilo on the east side of the island, Okabe said.

Shelters opened Wednesday on the Big Island and on the islands of Maui, Molokai and Lanai. Officials urged those needing the Molokai shelter to get there soon because of concerns that the main highway on the island's south coast could become impassable.

On the island of Oahu, shelters were scheduled to open Thursday. Aid agencies were also working to help Hawaii's sizeable homeless population, many of whom live near beaches and streams that could flood.

On the island of Lanai, it was eerily dead still and gray, said Nick Palumbo II, who owns Lanai Surf School and Safari.

"It's relatively like a regular day," he said by telephone. "I got friends calling me telling me there's surf at the beach, and they're actually going surfing right now."

He won't be joining them and instead is staying home with his four children since there's no school.

Palumbo is prepared for the storm after boarding up one large window and stocking up on snack food. He's also got a freezer full of fish he's caught on dives and deer he's hunted on the island to last them through the storm.

"I don't have a generator, but I figure as things thaw out, if the electricity goes, we'll just get cooking," he said.

The central Pacific gets fewer hurricanes than other regions, with about only four or five named storms a year. Hawaii rarely gets hit. The last major storm to hit was Iniki in 1992. Others have come close in recent years.

Napua Puaoi of Wailuku, Maui, said she and her husband planned on boarding up their windows and sliding doors. She was 12 at the time of Hurricane Iniki.

"When it did happen, I just remember pandemonium. It was all-out craziness," she said.

Unlike Florida or Texas, where residents can get in their cars and drive hundreds of miles to safety, people in Hawaii are confined to the islands. They have to make sure they have enough supplies to outlast power outages and other potential emergencies.

The Federal Emergency Management Agency moved several barges packed with food, water, generators and other supplies into the region ahead of Hurricane Hector, which skirted past the islands more than a week ago, FEMA Administrator Brock Long said.