SAN DIEGO (KGTV) -- Homeowners at the Rancho Monserate Country Club are on edge as they expect another round of rain Tuesday afternoon.

Some of the properties at the country club haven’t been cleaned up, but they were still lined with sandbags to protect from the hillsides nearby.

The goal is to protect the lots from further damage. On Monday, Cal Fire put out sandbags on the mountain overlooking the country club.

The strong winds from the morning rain did cause damage to several homes.

One home had its awning flipped onto the roof. Kate Lovelady and her husband were out early bringing the awning down to make sure it didn’t fly onto someone else property.

The image below shows the burn scar from the Lilac Fire that scorched 4,100 acres in San Diego County: 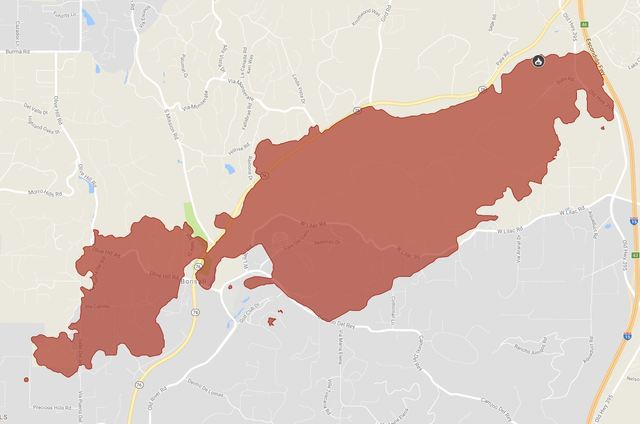 The couple's family lost two properties in the Lilac fire and a third is partially damaged.

Lovelady says the community was bracing for the worst with this storm, but they're hoping it passes quickly so they can continue their cleanup from the fire.

"This is just another big bump in the road for the community and they’ll all regroup and it’ll be great again," said Lovelady.

Homeowners were also concerned about rockslides. Giant boulders sit on the top of the mountain and there was also a fear that they'd wash down into the properties.

As people still clean up from the Lilac Fire, they say they won’t let their guard down until the storm passes.

Fortunately, no mudslides have been reported at the country club.