SAN DIEGO (KGTV) -- A winter storm warning has been issued for the mountains in San Diego County ahead of a strong winter storm expected to move in Monday night.

The winter storm warning goes into effect from 7 p.m. Monday to 10 p.m. Tuesday.

Snow accumulations are expected to be anywhere between six to 12 inches with difficult travel conditions expected, warned the National Weather Service. 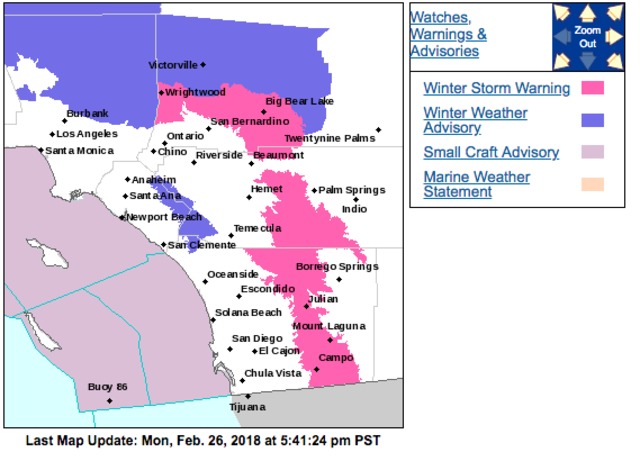 The National Weather Service also said snow is expected to fall to 2000 to 2500 feet Tuesday.

In addition to heavy snow, winds could top out at 50 miles per hour.

The San Diego County Sheriff’s Department says mountain residents should be prepared for crowds as families from low-lying areas travel to snow-packed mountains.

An employee with the Julian Lodge Bed and Breakfast says visitors usually come from San Diego, North County, Los Angeles and that the lodge has even hosted visitors from as far away as China and Japan.

In San Diego, 280 beds are being made available downtown as cold winter temperatures are set to swiftly fall over the county after sunset.

Father Joe’s Village will house 250 people at its building on 1501 Imperial Avenue. Check-ins will also be made available throughout the night with meals also being provided.

As many as 30 others will be sheltered at the PATH San Diego/Connections Housing Shelter at 1250 Sixth Avenue. Check-ins will be available from 5 p.m. to 7 p.m.