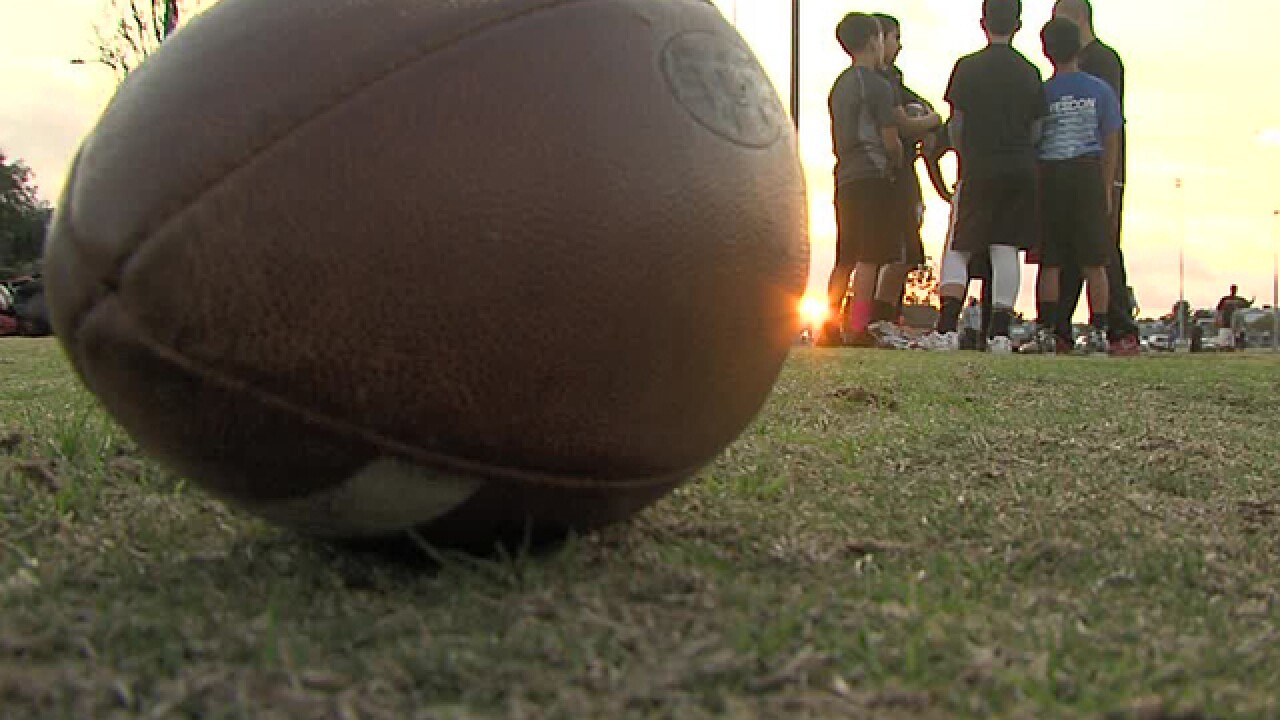 By: Allison Ash
Posted at 10:33 AM, Feb 24, 2016
SAN DIEGO -- A teacher and former Vista Pop Warner treasurer and board member has been arrested on accusations she stole $100,000 from the organization, in a story first reported by Team 10.
The San Diego County Sheriff’s Department reports that 41-year-old Rachel Owens of Vista was taken into custody Wednesday on multiple counts of identity theft and grand theft at the Guajome Park Academy in Vista, a charter school where she teaches math.
Owens was the treasurer for the Pop Warner Football and Cheer between October 2013 and November 2015. The sheriff’s department Cyber Financial Crimes Unit began investigating the case in November of last year.
According to the sheriff’s department, detectives arrested Owens at her place of work and booked her into the Vista Detention Facility on $300,000 bail.
In early January, several parents with Vista Pop Warner approached Team 10 claiming that thousands of dollars they had raised for expenses were gone.
Ken Elliot, a lawyer who also coaches a team in the league, told Team 10 that the incident began when vendors started calling board members asking why they weren't being paid for services. As the board began to investigate, they discovered thousands of dollars were missing and checks were bouncing.
Before getting law enforcement involved, Elliott drafted a letter to Owens, whom he suspected of using the funds for personal gain. At the time, Team 10 chose not to identify Owens because she had not been charged with a crime.
The letter demanded the money be returned, as well as any receipts and banking records. Elliott gave Team 10 a copy of the letter. Elliott claims Owens denied taking any money. She said she didn't have any records.
Team 10 was shown several of the checks, totaling $93,700, that were written as "reimbursements" to that same board member. One of them, for $5,000, was written two days before Christmas.
When Team 10 contacted Owens in early February, she called the claims "a witch hunt" and said in a series of emails that she had done nothing wrong. She told Team 10 that executive board members within the Vista Pop Warner organization "overspent."
Guajome Superintendent Bob Hampton issued a letter to parents following the arrest. It read, in part:

“As many of you are aware, a Guajome non-permanent staff member was arrested today for an offense which took place off campus and had no direct relationship to their job responsibilities at Guajome.  We have been aware of the on-going investigation by the San Diego Sheriff’s  department.  As a personnel matter we cannot go into further detail, but have had planned contingencies in place.  As always, our concern is for our students and providing them with a safe, supportive and positive learning environment.  That objective will not change.”

In Team 10’s early February coverage, Vista Pop Warner Vice President Andrew Staicer admitted that lax policies by the board of directors may have made it easier for the misappropriation to occur.
Staicer admitted to Team 10 he sometimes signed blank checks in the name of convenience. He said it was common practice to pre-sign checks to pay for referee services. Staicer said that the board is made up of volunteers and it operates with a sense of trust. He added that the board had no reason to suspect wrongdoing until checks to vendors began bouncing last fall.
"Forgive me, but a teacher who is also an accountant is one of the last places we're gonna look for issues in that area," Staicer told Team 10.
Staicer said the board was working to enact new policies to safeguard the association's funds.
There are about 300 children that play on Vista Pop Warner teams.
Scripps Only Content 2015