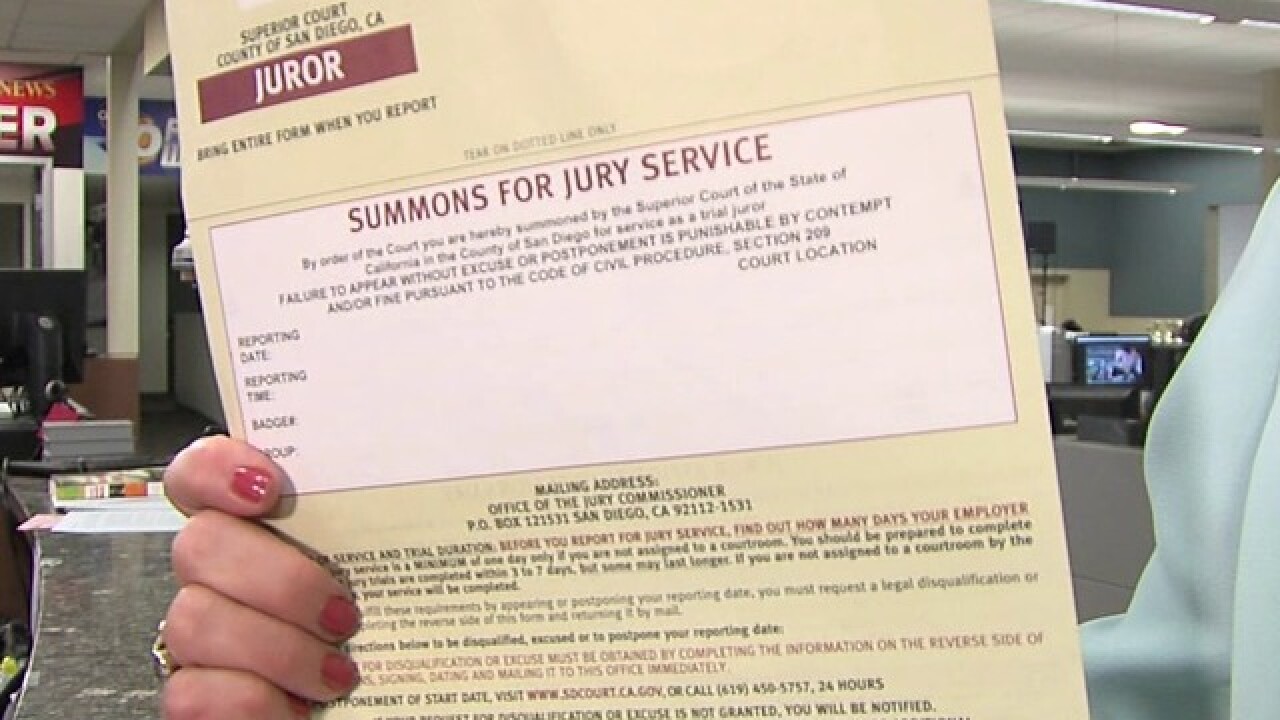 SAN DIEGO - Can you really go to jail if you ignore your summons for jury duty?

Team 10 learned thousands of San Diegans are breaking the law and getting away with it by ignoring their civic duty to serve as jurors.

Those who do serve say it's not fair.

"I think they ought to be penalized for not showing up, because if I didn't show up, I'd be penalized," said Janette Hall, who spoke to Team 10 during a lunch break at the downtown San Diego County Courthouse.

Hall and other jurors told Team 10 that jury duty is a hassle because they have to miss work, fight traffic and then fight boredom in the jury lounge, but they do it because it's what you're supposed to do.

Cindi Bartelli told Team 10 many of her friends look for excuses to skip their turn in the jury box. She doesn't blame them, but she doesn't follow their example, either.

"If you were on trial, I suppose you'd want to have a jury of your peers, so I just think it's the right thing to do," she added.

Team 10 contacted San Diego County's Jury Commissioner for the numbers. Michael Roddy said the county sends out 820,000 jury summons each year. About 28 percent, or 230,000, don't do their civic duty. Those who ignore the jury summons continue with their lives without facing any penalties.

How can that be when the jury summons has these words printed in bold type: "FAILURE TO APPEAR WITHOUT EXCUSE OR POSTPONEMENT IS PUNISHABLE BY CONTEMPT AND/OR FINE PURSUANT TO THE CODE OF CIVIL PROCEDURE, SECTION 209."

Team 10 asked Roddy why there is even a threat of punishment if the court isn't going to follow through.

Roddy replied, "I don't think it's a threat as much as it's we're really trying to tell people, at the end of the day, if we don't get the public support for the jury system, then the court may have to resort to sanctions."

Because there are almost always enough people to serve as jurors in San Diego County, Roddy said it's easier and less intimidation to use a more positive approach. Besides, it's expensive and time-consuming to go after jury duty scofflaws.

"That leaves a negative impression, not only of the system, but of the people who run the system and, you know, are you really going to be a good juror if you've been forced to come in?" Roddy said.

He prefers providing incentives to get people to serve.

The last time San Diego County had a shortage of jurors was in 2001. At that time, Roddy said a study was done to find out why. Out of 2,000 people who failed to report for jury duty, only about 4 percent, or 80 people, didn't have a valid excuse.

Some other California counties are enforcing the law. Roddy told Team 10 that Los Angeles County Superior Court has had to resort to punishment because of low juror turnout.