Proposition 17 would allow those on parole to vote

<p>Voting booths set up and ready to receive voters inside a polling station in Christmas, Florida on November 8, 2016.</p> 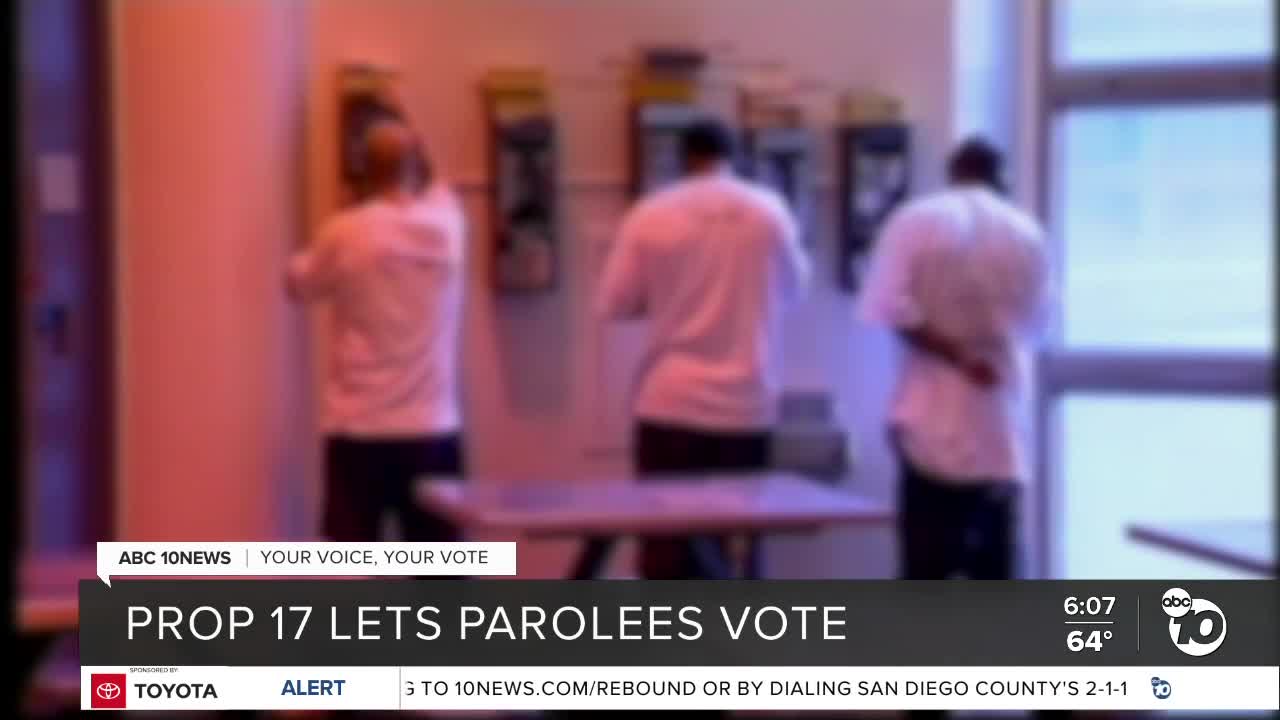 SAN DIEGO (KGTV) — Among the propositions that will be on the November ballot in California, Proposition 17 will ask voters to decide whether or not to allow individuals on parole to vote.

Voters will vote "yes" or "no" on the proposition, which is an amendment to the state's constitution introduced by Sacramento Assemblymember Kevin McCarty, according to BallotPedia.

In California, those who are "mentally incompetent or imprisoned or on parole for the conviction of a felony" for a state or federal sentence are not allowed to vote.

The passage of Proposition 17 would instead direct the state to only disqualify those who are currently serving a sentence for the conviction of a felony and allow those on parole for a felony conviction to vote.

"Parole is not an extension of punishment. It's a reintegration time for someone to come back in their community," says Shay Franco-Clausen, the Yes on Prop 17 Campaign Manager. "What better way to make them feel that they have a stake in the community is there than giving the right to them."

Those who support Prop 17 argue, "when a person completes their prison sentence, they should be encouraged to reenter society and have a stake in their community. Restoring their voting rights does that. Civic engagement is connected to lower rates of recidivism. When people feel that they are valued members of their community, they are less likely to return to prison," according to the official support statement.

19 other states, plus Washington DC currently allow ex-felons to vote while they're on parole. And the Yes on Prop 17 campaign points to a 2011 study by the Florida Parole Commission that showed parolees who are given the right to vote are less likely to commit another crime.

"If you're invested in your community and you feel like you are stakeholders, you're part of it. You don't want to do harm," say Franco-Clausen.

Opponents to the Proposition declined interview requests by ABC 10News, pointing to their published literature instead.

In it, they say, "Parole is an adjustment period when violent felons prove their desire to adjust to behaving properly in a free society. Their every move is monitored and supervised by a trained state officer. If the state does not trust them to choose where to live or travel, with whom to associate and what jobs to do, it MUST NOT trust them with decisions that will impact the lives and finances of all other members of society...

Proposition 17 started as ACA 6, and passed the State Assembly and Senate with 70% approval. It now needs a simple majority to become law.