Copyright 2020 The Associated Press. All rights reserved
AP
In this combination photo, president Donald Trump, left, speaks at a news conference on Aug. 11, 2020, in Washington and Democratic presidential candidate former Vice President Joe Biden speaks in Wilmington, Del. on Aug. 13, 2020. The conventions, which will be largely virtual because of the coronavirus, will be Aug. 17-20 for the Democrats and Aug. 24-27 for the Republicans. (AP Photo)
By: Scripps National
Posted at 8:24 AM, Sep 23, 2020

With just over a month until the election, Florida and Arizona are emerging as battleground states that are neck-and-neck for President Donald Trump and former vice president Joe Biden.

For the first time in 2020, Trump has a slight lead in Florida, according to the Washington Post-ABC News poll. Among participants who said they are likely voters, Trump leads 51-to-47 percent, however this is considered within the margin of error.

In Arizona, among likely voters, the poll shows Trump and Biden at 49-to-48 percent. Arizona has voted for the Republican presidential candidate for every election since 1952 except once, the re-election of Bill Clinton in 1996.

Researchers of this poll note that these percentages are so close the difference is not statistically significant. The margin of sampling error is 4 points among Florida results and 4.5 points among Arizona results. 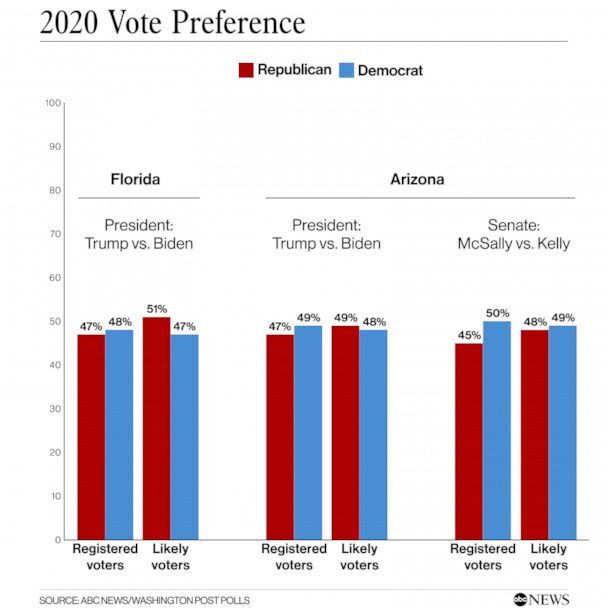 The economy appears to be the top issue for many this election cycle. About 31 percent of registered voters in Florida said the economy is the single most important issue, and 33 percent of those in Arizona.

Trump’s overall approval rating among registered voters is 47 percent in both states.

There is also a big split in how voters of different parties plan to vote on Election Day. In both Florida and Arizona, more than 70 percent of registered Republicans plan on voting in-person on Election Day. Democratic participants are more likely to vote early or absentee/mail-in, more than 60 percent.

This latest poll was conducted by landline and cell phone interviews between September 15-20 among 765 registered Florida voters and 701 registered Arizona voters.