DNC Day One: Michelle Obama says vote like lives depend on it 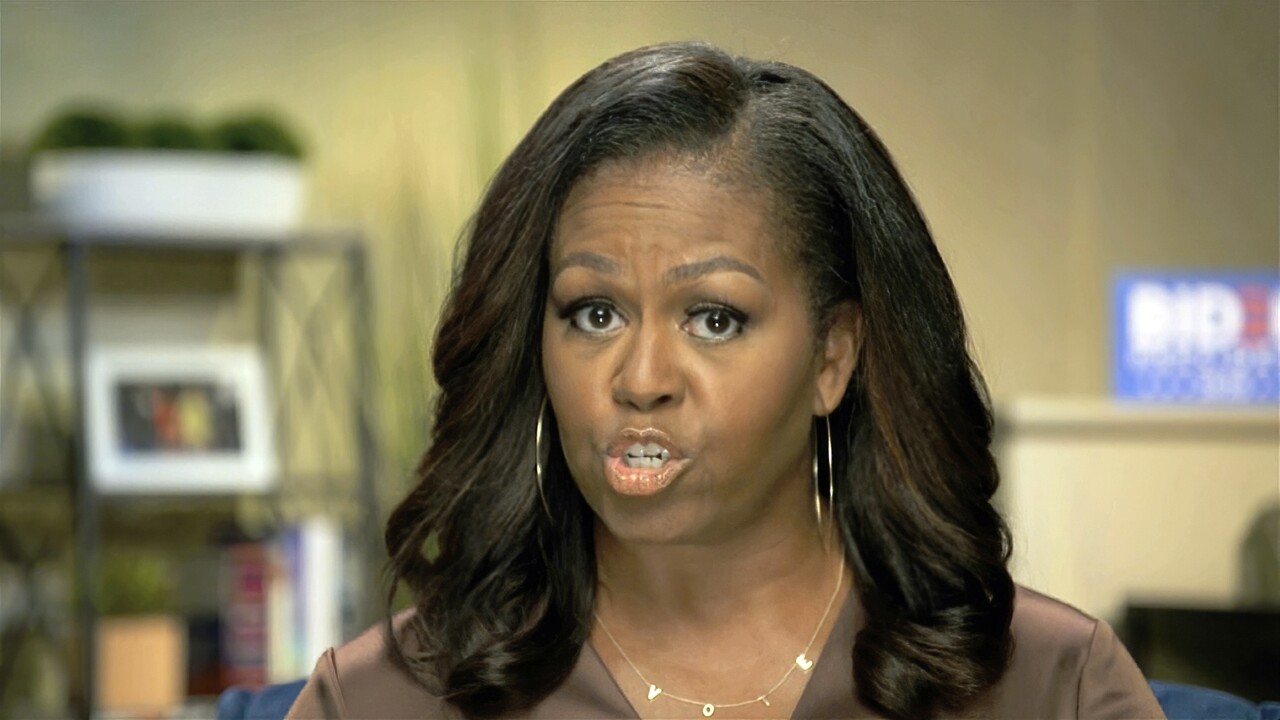 (AP) -- Michelle Obama is warning Americans to “vote for Joe Biden like our lives depend on it” during her speech at the Democratic National Convention.

In remarks that capped off Monday night's event, Mrs. Obama offered a sharp rebuke of the Trump presidency, telling viewers that he “has had more than enough time to prove that he can do the job, but he is clearly in over his head.” “He cannot meet this moment,” she said.

She added that “if you think things cannot possibly get worse, trust me, they can.” Mrs. Obama emphasized the need for all Americans to vote, making reference to the voters who stayed home in 2016 and helped deliver Donald Trump the win that year, even as he lost the popular vote.

She says, “We’ve all been suffering the consequences."

In contrast, she described Biden as a “profoundly decent man” who “knows what it takes to rescue an economy, beat back a pandemic and lead our country.”

HERE’S WHAT YOU NEED TO KNOW ABOUT THE DEMOCRATIC NATIONAL CONVENTION:

HERE’S WHAT ELSE IS HAPPENING:

Bernie Sanders has unleashed a scathing attack on President Donald Trump, suggesting that under him “authoritarianism has taken root in our country.”

Addressing the opening night of the virtual Democratic National Convention on Monday, the Vermont senator said Trump had proved incapable of controlling the coronavirus outbreak, coping with the economic fallout and addressing institutional racism in the United States and climate change threatening the globe.

Sanders, who finished second in the Democratic primary behind Joe Biden, struck a more optimistic tone when he thanked supporters who voted for him in 2016 and 2020 for helping to move the country “in a bold, new direction.”

He called on his backers, as well as those who supported other 2020 Democratic primary contenders or Trump four years ago, to unite behind Biden.

Sanders says, “My friends, the price of failure is just too great to imagine.”

Joe Biden’s former primary rivals are calling on rank-and-file Democrats to put aside any hard feelings and support the former vice president’s campaign.

“It’s not easy to unite the Democratic Party,” said Washington Gov. Jay Inslee. “Joe Biden has pulled it off.”

Democrats started with a large, historically diverse field of candidates. But while the party is becoming increasing diverse, Biden, a 77-year-old white man, won.

The former rivals said the need to defeat President Donald Trump is just too important to let hard feelings linger.

“There is no cavalry,” O’Rourke said. “We are the cavalry.”

The former Ohio governor appeared at the Democratic National Convention on Monday in a show of bipartisanship rarely seen in party conventions. Kasich ran for president four years ago but lost the GOP nomination to Donald Trump.

Kasich told Republicans and independents wary of supporting a Democrat not to worry that Joe Biden would take a “sharp left and leave them behind” because Biden is a reasonable person who can’t be pushed around. He admitted there are places where the two disagree.

“But that’s OK, because that’s America,” he said.

He crafted the election as a crossroads for the nation, saying the last four years have led to dysfunction and increasing vitriol between Americans.

Kasich left the governorship in 2018. He previously served in Congress and used to have his own show on Fox News in the early 2000s.

New York Gov. Andrew Cuomo says his state found a way to bring the coronavirus under control by following scientific guidelines and coming together -- an example that he says the Trump administration has refused to follow.

Cuomo addressed the opening night of the virtual Democratic National Convention late Monday, saying New York was “ground zero” for the early outbreak in the U.S. He said the Trump administration “watched New York suffer” without learning from it.

“For all the suffering and tears, our way worked and it was beautiful,” Cuomo said, adding, “Americans’ eyes have been opened and we’ve seen the truth: That government matters and leadership matters.”

He said that the rest of the country will follow New York’s lead by wearing masks and practicing social distancing to slow the spread of the virus -- despite inconsistent messaging from the White House. Cuomo also contrasted Trump with presumptive Democratic nominee Joe Biden, saying that Biden can be the kind of leader “who can build us up, not tear us down.”

George Floyd’s brothers led a moment of silence during the first night of the Democratic National Convention to honor the Black Americans who had been killed by police.

Philonese Floyd, sitting next to his brother Rodney Floyd, said that George Floyd had a giving spirit that has shown up on streets around our nation” as Americans have protested systemic racism and police brutality in recent months.

Philonese Floyd said, “George should be alive today.” He then listed the names of Black Americans who were killed by law enforcement officers or in police custody.

George Floyd, a Black man who was handcuffed, was killed May 25 after a white police officer pressed his knee against Floyd’s neck for nearly eight minutes as Floyd said he couldn’t breathe.

Philonese Floyd implored viewers to “carry on the fight for justice,” adding, “Our actions will be their legacies.”

Standing on an outlook above Black Lives Matter Plaza, Bowser said it was time to elect a president who “doesn’t fan the flames of racism.”

Bowser ordered her city government to paint the words “Black Lives Matter” on the street leading to the White House after protests erupted in Washington and around the U.S.

Trump and Bowser have had a strained relationship for much of his time in Washington. That’s especially been the case in the wake of protests that erupted over Floyd’s killing by Minneapolis police.

During her remarks, Bowser specifically criticized the use of chemical irritants by law enforcement who cleared protesters from Lafayette Square in June. After the crowd was cleared, Trump emerged from the White House for a photo op with a Bible in front of a nearby church.

Bowser said that while people were peacefully protesting, Trump was “plotting.”

The St. Louis couple who waved firearms at Black Lives Matter protesters outside their home in June will appear virtually at next week’s Republican National Convention to express their support for President Donald Trump.

A Trump adviser on Monday confirmed the participation of Patricia and Mark McCloskey. The news was first reported by The Washington Post.

The McCloskeys, who are white, have claimed they were protecting themselves from protesters marching on their private street, but they were each charged by a local prosecutor with one felony count of unlawful use of a weapon. Trump has been critical of their treatment and has spoken out in defense of the couple.

The first night of the Democratic National Convention has begun.

The event is being held virtually after the coronavirus pandemic shuttered plans for an in-person convention in Milwaukee.

Five of Biden’s grandchildren recited the Pledge of Allegiance.

Bernie Sanders will use his Democratic National Convention speech to urge those who supported his progressive presidential bid -- or who may have voted Republican four years ago -- to unite behind Joe Biden in November.

According to excerpts released before Sanders’ Monday night speech, he plans to say that the country needs “an unprecedented response” because of the “unprecedented set of crises we face.”

Many of Sanders’ top advisers and supporters have spent months working with Biden’s campaign on joint task forces that devised common policy goals for use in the Democratic platform.

The idea was to promote party unity in a way that did not happen in 2016, when many Sanders supporters remained unenthusiastic about Hillary Clinton.

Sanders plans to say that Americans must “come together” to defeat President Donald Trump and elect Biden. He will say, “The price of failure is just too great to imagine.”

Democratic National Committee Chair Tom Perez says the handful of 2020 presidential caucuses should be the last the party ever holds.

He didn’t specifically name Iowa, which for decades has led off the nominating calendar, but his position would represent a seismic shift in the party’s traditions.

Perez’s term as chairman will end before the 2024 nominating calendar is determined. But he told The Associated Press on opening day of the Democratic National Convention that he plans to “use the bully pulpit as a former chair" to make needed changes.

Iowa's caucuses this year were disastrous, with state and national party officials spending days trying to determine the winner. Because of the irregularities, The Associated Press decided against declaring a winner.

Perez wouldn’t comment on whether he thinks Iowa or New Hampshire should give up their leadoff spots. But he said the demographics “will undoubtedly come up” in future party discussions.

President Donald Trump is accusing his 2020 opponent Joe Biden of being a “puppet of left-wing extremists" hours before the start of the Democratic National Convention.

Trump was in Minnesota on Monday to press his law and order reelection rhetoric as part of counterprogramming to the DNC.

At an airport hangar in Mankato, Trump called Biden a “puppet of left-wing extremists trying to erase our borders, eliminate our police, indoctrinate our children, vilify our heroes, take away our energy."

Trump says a Biden victory would “replace American freedom with left-wing fascism.” However, fascism is a form of right-wing authoritarianism.

He went so far as to say Biden probably doesn't know where Minnesota is. Trump has pushed a message that the 77-year-old Biden is in cognitive decline, while critics have raised the same accusation against the 74-year-old Trump. The president recently tried to demonstrate his mental fitness by reciting five words in order in a television interview.

Joe Biden will accept the Democratic presidential nomination in a live speech Thursday night, but he’ll be seen and heard every night of the convention in some form.

Democratic National Committee Chair Tom Perez tells The Associated Press on Monday that Biden will be part of the virtual convention’s prime-time programming leading up to his Thursday address. For example, Perez said Monday’s programming will include Biden talking with activists about criminal justice reform.

Perez said viewers this week also will see the former vice president talking about the COVID-19 pandemic and his health care proposals and having conversations with everyday Americans about the economy.

During traditional conventions, the nominee is often mentioned from the speaker’s podium but is largely shielded from view as the convention builds to the acceptance speech on Thursday night.

There have been rare exceptions. Al Gore greeted his then-wife, Tipper Gore, for a very public kiss after her speech in 2000. President Barack Obama emerged from backstage to greet former President Bill Clinton after his speech 2012.