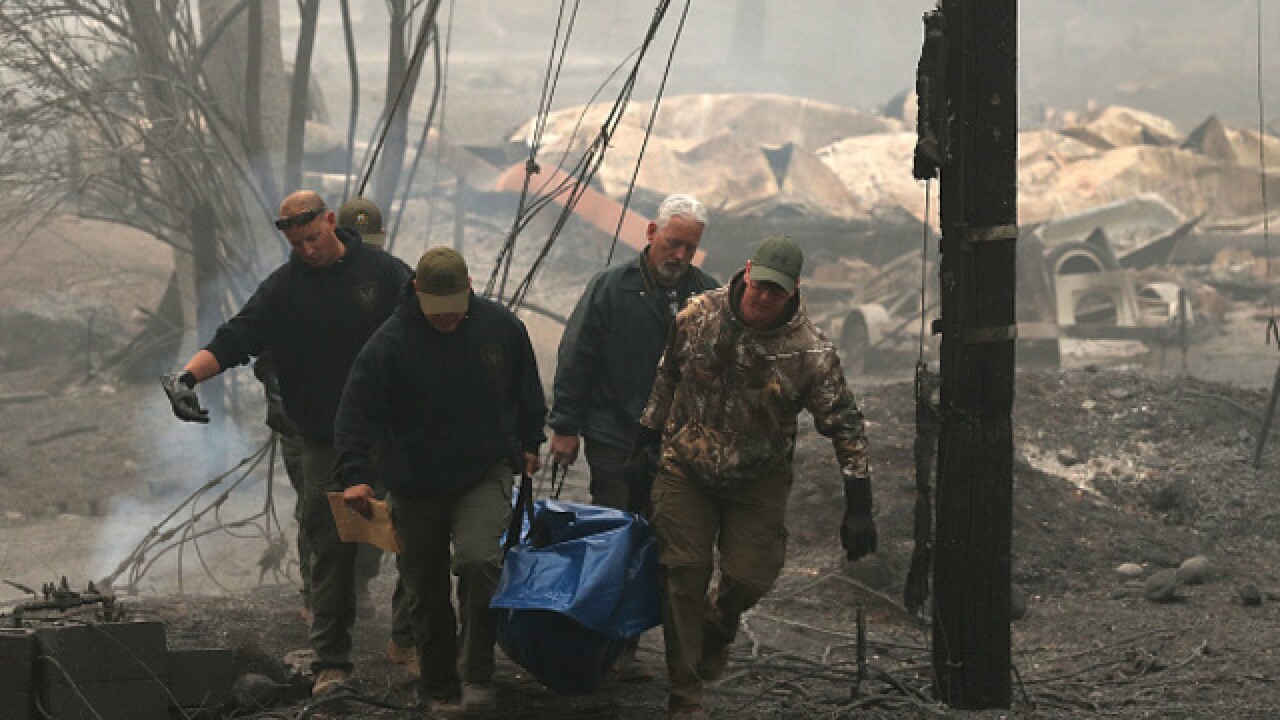 Copyright 2018 Scripps Media, Inc. All rights reserved. This material may not be published, broadcast, rewritten, or redistributed.
Justin Sullivan
<p>PARADISE, CA - NOVEMBER 10: Yuba and Butte County sherriff deputies carry a body bag with a deceased victim of the Camp Fire on November 10, 2018 in Paradise, California. Fueled by high winds and low humidity, the rapidly spreading Camp Fire ripped through the town of Paradise and has quickly charred 100,000 acres and has destroyed over 6,700 homes and businesses in a matter of hours. The fire is currently at 20 percent containment. (Photo by Justin Sullivan/Getty Images)</p>

Wildfires continued to rage on both ends of the state, with gusty winds expected overnight which will challenge firefighters. The statewide death toll stood at 31. The Camp Fire that ravaged a swath of Northern California was the deadliest.

A total of 29 bodies have been found so far from that fire, Butte County Sheriff Kory Honea told a news briefing Sunday evening. He said 228 people were still unaccounted for.

Ten search and recovery teams were working in Paradise — a town of 27,000 that was largely incinerated on Thursday — and in surrounding communities. Authorities called in a mobile DNA lab and anthropologists to help identify victims of the most destructive wildfire in California history.

By early afternoon, one of the two black hearses stationed in Paradise had picked up another set of remains.

Sol Bechtold drove from shelter to shelter looking for his mother, Joanne Caddy, a 75-year-old widow whose house burned down along with the rest of her neighborhood in Magalia, just north of Paradise. She lived alone and did not drive.

Bechtold posted a flyer on social media, pinned it to bulletin boards at shelters and showed her picture around to evacuees, asking if anyone recognized her. He ran across a few of Caddy's neighbors, but they hadn't seen her.

As he drove through the smoke and haze to yet another shelter, he said, "I'm also under a dark emotional cloud. Your mother's somewhere and you don't know where she's at. You don't know if she's safe."

He added: "I've got to stay positive. She's a strong, smart woman."

Officials and relatives held out hope that many of those unaccounted for were safe and simply had no cellphones or other ways to contact loved ones. The sheriff's office in the stricken northern county set up a missing-persons call center to help connect people.

Gov. Jerry Brown said California is requesting aid from the Trump administration. President Donald Trump has blamed "poor" forest management for the fires. Brown told a press briefing that federal and state governments must do more forest management but said that's not the source of the problem.

"Managing all the forests everywhere we can does not stop climate change," Brown said. "And those who deny that are definitely contributing to the tragedies that we're now witnessing, and will continue to witness in the coming years."

Firefighters battling the Camp Fire with shovels and bulldozers, flame retardants and hoses expected wind gusts up to 40 mph (64 kph) overnight Sunday. Officials said they expect the wind to die down by midday Monday, but there was still no rain in sight.

The burned bodies were discovered in a driveway in Malibu, where residents forced from their homes included Lady Gaga, Kim Kardashian West and Martin Sheen. Actor Gerard Butler said on Instagram that his Malibu home was "half-gone," and a publicist for Camille Grammer Meyer said the "Real Housewives of Beverly Hills" star lost her home in the seaside enclave.

Flames also besieged Thousand Oaks, the Southern California city in mourning over the massacre of 12 people in a shooting rampage at a country music bar Wednesday night.

In Northern California, Sheriff Honea said the devastation was so complete in some neighborhoods that "it's very difficult to determine whether or not there may be human remains there.

Authorities were also bringing in a DNA lab and said officials would reach out to relatives who had registered their missing loved ones to aid in identifying the dead after the blaze destroyed more than 6,700 buildings, nearly all of them homes.

About 150,000 people statewide were under evacuation orders, most of them in Southern California, where nearly 180 structures were destroyed, including a large mobile home community in rugged Santa Monica Mountains north of Malibu.

Brown's request for a major-disaster declaration from Trump would make victims eligible for crisis counseling, housing and unemployment help, and legal aid.

Drought, warmer weather attributed to climate change, and the building of homes deeper into forests have led to longer and more destructive wildfire seasons in California. While California officially emerged from a five-year drought last year, much of the northern two-thirds of the state is abnormally dry.

"Things are not the way they were 10 years ago. ... The rate of spread is exponentially more than it used to be," said Ventura County Fire Chief Mark Lorenzen, urging residents to evacuate rather than stay behind to try to defend their homes.

One of the Northern California fire's victims was an ailing woman whose body was found in bed in a burned-out house in Concow, near Paradise.

Ellen Walker, who was in her early 70s, was home alone when the fire struck on Thursday, according to Nancy Breeding, a family friend.

Breeding said Walker's husband was at work and called a neighbor to tell his wife to evacuate, but she was on medication and might not have been alert. Authorities confirmed her death late Friday.

"A fireman took him to the house to confirm," Breeding said. "This is a devastating thing, and it's happening to so many people."