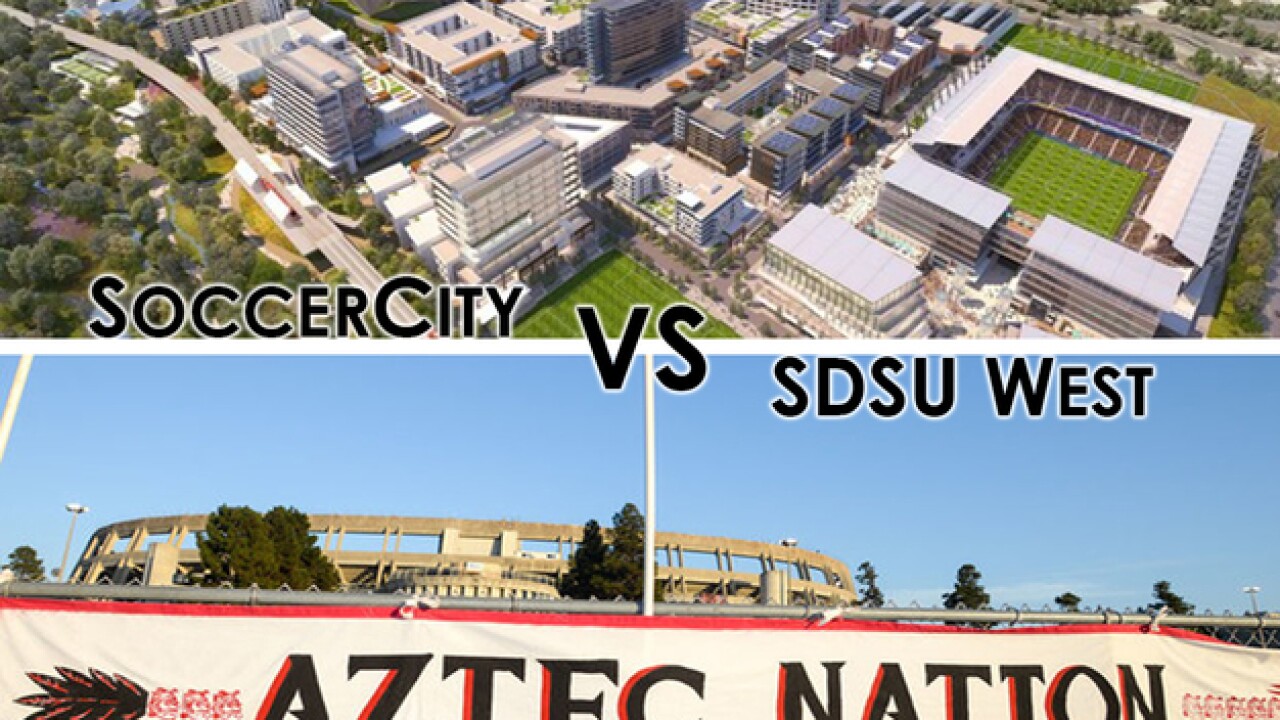 Copyright 2017 Scripps Media, Inc. All rights reserved. This material may not be published, broadcast, rewritten, or redistributed.
Contributed

SAN DIEGO (KGTV) - Ideas for the future of the former Qualcomm Stadium site in Mission Valley were given the pro-con treatment by the district's councilman.

And it was met with an almost immediate rebuttal.

San Diego Councilman Scott Sherman released a white paper comparing the competing plans for Mission Valley site. On one hand, San Diegans have SoccerCity, create by FS Investors, and on the other, the newly-announced SDSU West initiative, brought forth by the Friends of SDSU group.

"As an elected official, it is my job to review each proposal, substantial or not to determine whether it is a good deal for taxpayers and the right plan for the City moving forward," Sherman stated in a release.

The two measures could compete during the November 2018 general election.

"San Diegans deserve to review the details before committing to placing the measure on the ballot. As I have said numerous times in the past, devil is in the details," Sherman stated.

Sherman said he's been asked about a handful of aspects surrounding the site, on which he focused his comparison: housing, stadium size and cost to taxpayers, value of land and what proponents are willing to pay, SDSU expansion, traffic.

"Due to lack of specifics, it is impossible to determine the impacts of the 'Friends of SDSU,'" Sherman said. He added that he's urging San Diegans not to sign the signature initiative for the SDSU West's 13-page plan. The group has until the end of the year to collect 72,000 signatures to qualify as a November ballot measure.

SoccerCity, which has submitted as 1,300-page plan, has already qualified for the ballot. Sherman also announced his support for FS Investors' plan back in May.

The final scorecard for Sherman's comparison listed the aspects side-by-side according to information from the competing proposals:

"What is clear in this proposal is that it forces the City to sell a taxpayer asset to a taxpayer-funded organization for the privilege of receiving little to no tax generation from the asset. This seems less than ideal," Sherman said of the SDSU West plan.

Friends of SDSU issued a statement following the councilman's release:

“SDSU West is designed to protect the long-term interests of the City, San Diego State University and all San Diegans. Only our initiative carefully balances those interests. We welcome community feedback on the initiative, but a public and transparent planning process is imperative to determine the future of the SDCCU Stadium site. SDSU West unlocks the potential for the University to exceed its current $3 billion economic impact and continue growing to meet the critical higher education needs of our region.”

“Councilmember Sherman is not an objective source on this issue and his white paper is factually wrong on several levels. He long ago supported SoccerCity, despite its many flaws and lack of protections for San Diegans. SoccerCity is and continues to be a one-sided deal that benefits a small group of wealthy developers that are not obligated to deliver on any of their promises, a fact that has been validated numerous times by our own City Attorney.”