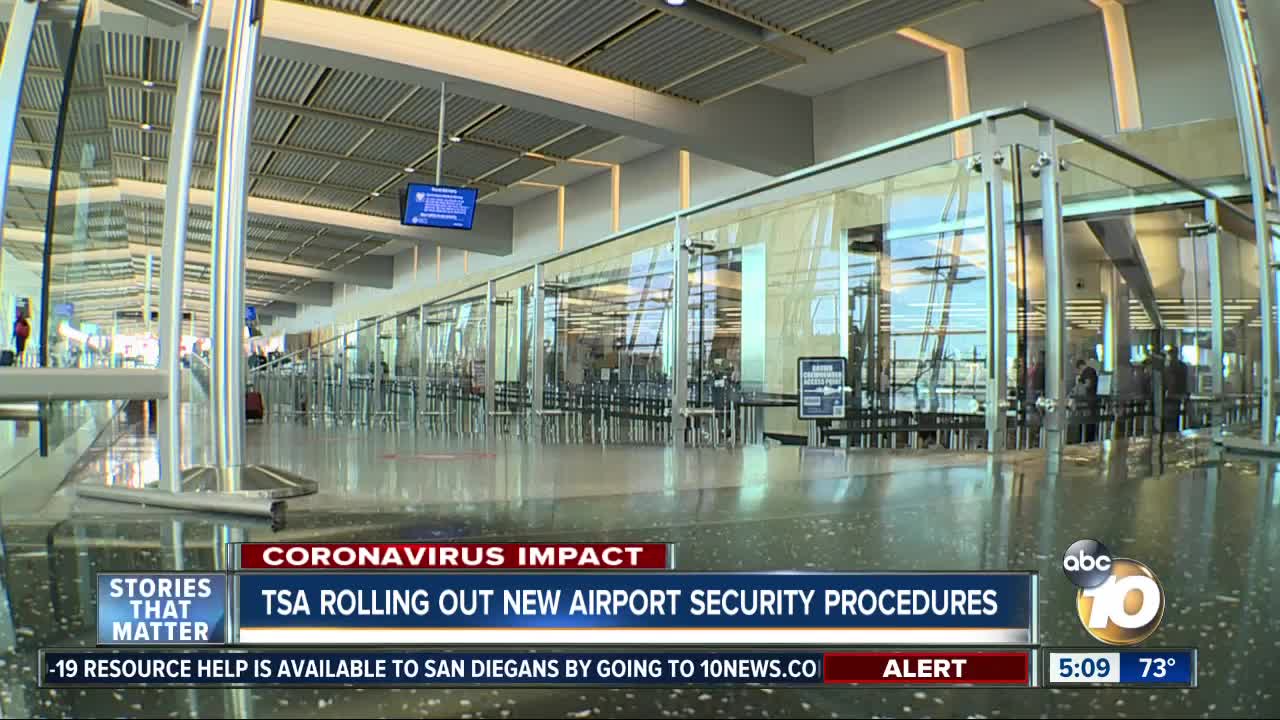 TSA reports that with the Memorial Day holiday weekend kicking off the start of summer, agents are preparing for a very different travel season, given the evolving pandemic.

TSA revealed that it already began implementing the changes with more to be implemented nationwide by mid-June.

San Diegan Jeff Geuder travels the country as a management consultant. "Before the lock down, I was traveling every week. At least one city and sometimes two cities a week," he told 10News on Thursday. Due to the COVID-19 crisis, its been more than 70 days since he's traveled. "I'm flying for the first time next week," he added.

Geuder is preparing for TSA's new screening procedures but has concerns about how the general population will handle the changes. "When the non-business travelers start to become more present at the airport, that's when I think it will create a lot of issues just in terms of the lines in general," he said.

Below are the procedural changes from TSA’s press release on Thursday:

Separate food for X-ray screening. Passengers should place their carry-on food items into a clear plastic bag and place that bag into a bin. Food items often trigger an alarm during the screening process; separating the food from the carry-on bag lessens the likelihood that a TSA officer will need to open the carry-on bag and remove the food items for a closer inspection. This requirement allows social distancing, reduces the TSA officer’s need to touch a person’s container of food and reduces potential for cross-contamination. TSA Precheck members do not need to remove items from their bags.

Pack smart. Passengers should take extra care to ensure that they do not have any prohibited items, such as liquids, gels or aerosols in quantities greater than 3.4 ounces, in their carry-on bags (water bottles, shampoo). In response to COVID-19, TSA is allowing one liquid hand sanitizer container, up to 12 ounces per passenger, in carry-on bags. Passengers are required to remove the hand sanitizer from the carry-on bag before being submitted for X-ray screening. If a bag is found to contain a prohibited item, passengers may be directed to return to the divestiture table outside of security with their carry-on bags to remove the item and dispose of the item. The passenger may also be directed back outside of security to remove, items that should have originally been divested (such as laptops, liquids, gels, and aerosols, and large electronics) and resubmit their property for X-ray screening. By resolving alarms in this manner, TSA officers will need to touch the contents inside a carry-on bag much less frequently, reducing the potential for cross-contamination.

Practice social distancing. Passengers should allow for social distancing to reduce direct contact between employees and travelers whenever possible without compromising security. Noticeable adjustments leading up to the security checkpoint include, increasing the distance between individuals as they enter the security checkpoint, placing visual reminders of appropriate spacing on checkpoint floors and staggering the use of lanes where feasible. No two airports are alike, so this could look a little different at each airport.

Wear facial protection. TSA officers at checkpoints are now using facial protection. Travelers are encouraged to wear face protection to the checkpoint as well. Please note, however, passengers may need to adjust it during the screening process. Travelers are also encouraged to remove items such as belts, and items from their pockets, like wallets, keys and phones, and put them directly into their carry-on bags instead of into the bins to reduce touch-points during the screening process.