SAN DIEGO (CNS) - State data has landed San Diego County in the most restrictive tier of the state's COVID-19 reopening plan, meaning nonessential businesses have two days to prepare for the regression.

"These are the results of our individual actions and behaviors that assign us to a tier," she said.

Many nonessential businesses will be required to move to outdoor-only operations. These include restaurants, family entertainment centers, wineries, places of worship, movie theaters, museums, gyms, zoos, aquariums and cardrooms. Amusement parks, and live audience sporting events are closed. Bars, breweries and distilleries will be able to remain open as long as they are able to operate outside and with food on the same ticket as alcohol.

Retail businesses and shopping centers will be able to remain open with 25% of the building's capacity. No food courts will be permitted.

#SanDiego officially back in state’s most restrictive, purple #COVID tier. The following restrictions will take place this Saturday, at midnight. @10News pic.twitter.com/qu1WIr6rT1

San Diego County is far from the only jurisdiction sliding backward. San Diego County Supervisor Nathan Fletcher said Tuesday that 11 counties in California were preparing to move to more restrictive tiers. He said it was likely cases would continue to increase for weeks, even after the purple tier restrictions.

"Slowing the spread of COVID is like turning an aircraft carrier, it's not a jet ski," he said.

The county's demotion from the less-restrictive red tier is the result of two weeks of case rates that exceeded the threshold of 7 per 100,000 residents. In recent weeks, the region had an unadjusted rate well above the purple tier guidelines, but a significant effort to increase the volume of tests had allowed for an adjustment to bring it back to the red, or substantial, tier.

"With every county ... we're always in close dialogue. I myself talk to many counties every day, whether it's their public health leaders, their elected leaders -- answer questions, hearing perspectives, hearing viewpoints and trying to relate and express our level of concern," Ghaly said Tuesday.

"But it also always comes with a hand of support, a hand of interest in trying to figure out what is the next thing we can do, what is the current state of affairs, and that goes for San Diego as well," he said. "I commend the leadership there, up and down from their board to the number of people in their public health department and throughout the county who are really going to tremendous effort to not just keep things open but first and foremost to pay attention to transmission, to recognize that this is a serious and, you know, deadly situation for many and we want to do what we can to reduce transmission." 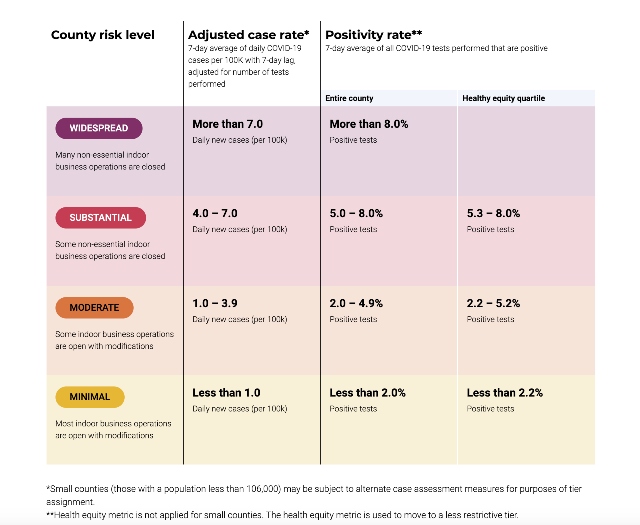 Even as the number of cases continues to climb, the testing positivity rate for the region continues a decline. From last week's data, it dropped to 2.6%, a 0.8% decline. It still remains high enough for this metric to remain in the orange tier.

The state's health equity metric, which looks at the testing positivity for areas with the least healthy conditions, increased from 5.3% to 6.5% and remained in the red tier. This metric does not move counties backward to more restrictive tiers, but is required to advance.

Of the tests reported Tuesday, 5% returned positive, raising the 14- day rolling average of positive tests to 3.5%.