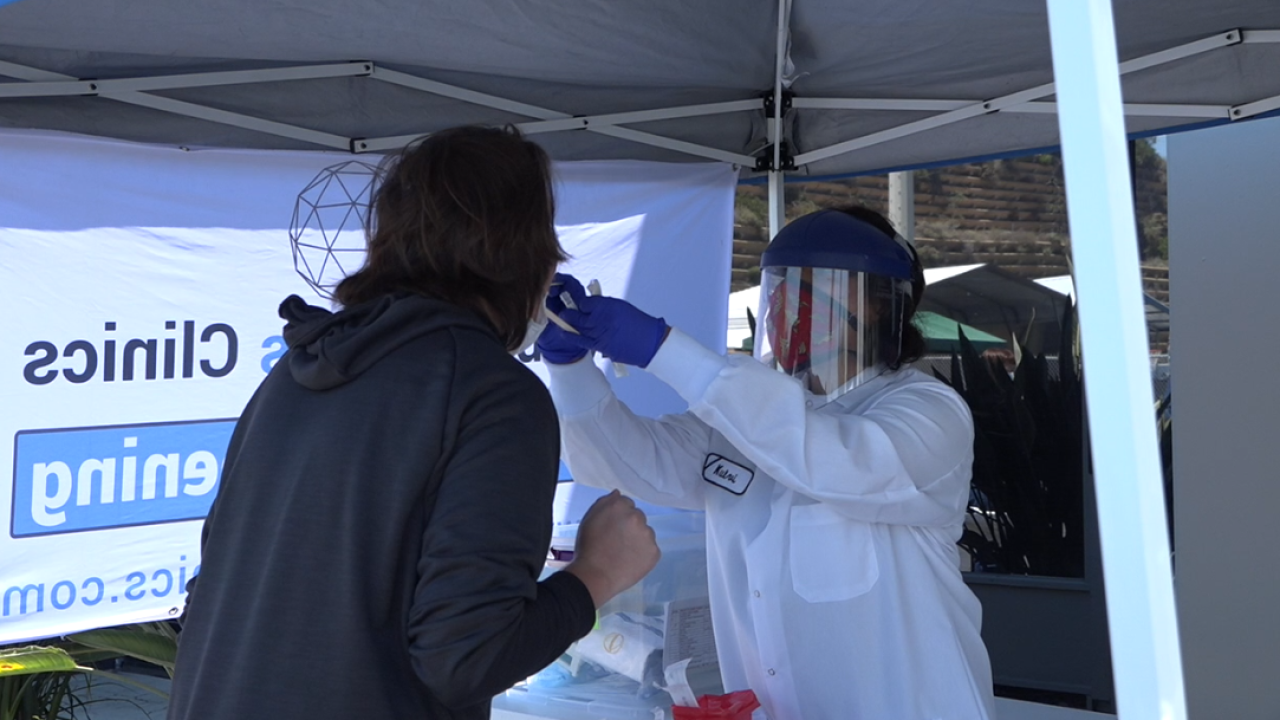 Copyright 2020 Scripps Media, Inc. All rights reserved. This material may not be published, broadcast, rewritten, or redistributed.
Jeremy Gibson

SAN DIEGO (CNS) - San Diego County will remain in the red tier for COVID-19 cases, with a state-adjusted case rate of 6.7 per 100,000 residents, the county's public health officer told the Board of Supervisors during their meeting Tuesday.

California officials announced changes to the monitoring system for counties on Tuesday. County public health officials said their unadjusted case rate was above 7.0, at 7.2. However, because testing levels were above the state median testing volume, the county's adjustment level was decreased.

While it's not possible to predict what the future holds for the state testing system, the county is exceeding testing numbers, Dr. Wilma Wooten said.

Nick Macchione, county Health & Human Services director, said that by next moth, testing capacity is on track to increase to roughly 30,000 tests a week.

Machionne said that along with facilitating the testing needs of schools, improved capacity will help the county stay above the state's testing median. The county also now has seven community-based organizations working to stop virus spread, Macchione said.

The county's testing positivity percentage is 3.8%.

"They play a vital role of reaching our hardest-hit communities," he added. In related news, county parks are slated to reopen this week, the chief administrative officer told the board.

County Chief Administrative Officer Helen Robbins-Meyer said her department received guidance Monday night, and is now working to get playgrounds open by this weekend. She added the county will also working with other cities on reopening their playgrounds as well.

While the board took no new actions regarding policy, Supervisor Jim Desmond said the colored tier system is flawed, and that every business should be afforded the same opportunity to open up safely.

"We're not dealing with a widespread pandemic," Desmond said, adding the county's hospital cases are low.

"If I look to Sacramento, I wonder, 'What's the goal?'" Desmond said.

He said the county should not base its economic future on a vaccine. "We need to learn to live with the virus, and win back the public's trust," Desmond added.

Supervisor Dianne Jacob praised county health officials, along with residents, for their efforts to combat the spread of the virus. "Hopefully we can keep moving forward," she added.

Of the 6,010 tests reported Monday, 2% returned positive, dropping the 14-day rolling average percentage of positive cases to 3.3%. The state-set target is less than 8%. The seven-day daily average of tests was 8,431.

According to a report released Monday by the Chicano Federation, there are significant and systemic barriers preventing Latinos from receiving COVID-19 testing and participating in contact tracing efforts in San Diego County.

However, the report, "Perceptions of Contact Tracing Among San Diego Latinos," finds that Latinos in San Diego can and will participate in testing and contact tracing if the county's testing, tracing and treatment strategy -- also known as T3 -- is available in both Spanish and English, addresses privacy and financial concerns and removes isolation barriers.

Of the more than 46,000 COVID-19 cases in the county to date, Latinos account for nearly 66% and nearly half of the 776 fatalities due to the illness. The group makes up around 35% of the county's total population.

San Diego State University reported three new cases of COVID-19 on Monday, bringing the total number of cases to 1,077 since Aug. 24, the first day of instruction for the fall semester. A total of 33 cases were reported at SDSU on Friday, Saturday and Sunday.

These totals include 1,033 confirmed cases and 44 probable cases. None of the COVID-19 cases have been connected with instructional or research spaces since fall instruction began.

The eight confirmed faculty or staff cases are from staff members associated with an auxiliary of SDSU.