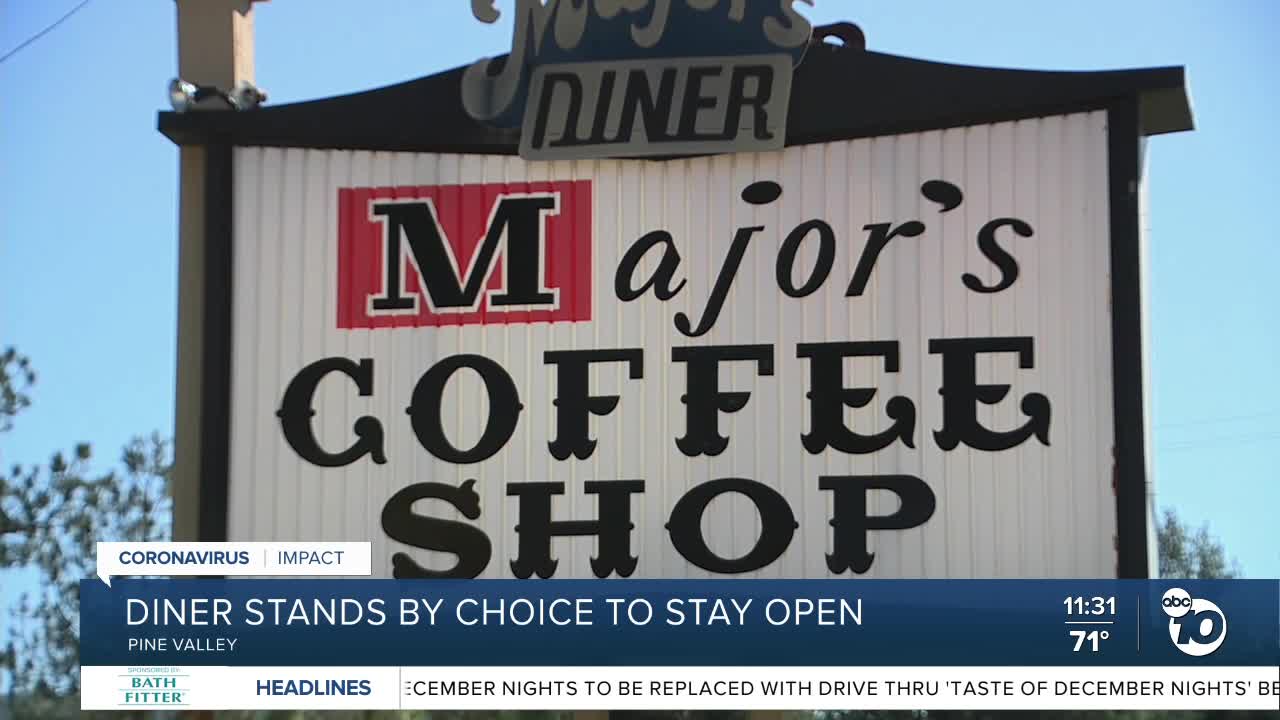 Despite being 1 of 7 restaurants who received a cease and desist letter from county officials, the owner of Major's Diner in Pine Valley said said he will not back down and comply.

PINE VALLEY, Calif. (KGTV) -- After Larry McNamer received a cease-and-desist letter from San Diego County officials, during the first week purple tier restrictions went into place, he said he will not back down.

"This is what courts are for. I'll fight it, I will fight it," the owner of Major’s Diner in Pine Valley said.

In the letter, county officials noted he could face up to a $1,000 fine for every violation under the state's guidelines, which includes not allowing guests inside.

McNamer said it all boils down to survival of this business and what he thinks is right in an uphill battle with the county and the state.

"They're going to have be a lot more fair about doling this out and understand that we zero cases up here [in Pine Valley],” he said.

Even as he continues to serve up hot plates inside, McNamer said nothing changes when it comes to safety measures given by the state. He said guests are sat apart inside and have the option of dining outdoors if they choose.

ABC 10News caught up with a couple from Alpine who grabbed a bite to eat Friday morning, not because Major's was the only diner open but they wanted to support him after seeing him on ABC 10News newscasts.

"We saw they were in trouble and in need of assistance, so we came to support them,” the supporter, Mark, said.

ABC 10News asked Mark and his wife if they thought customers supporting restaurants who defy public health orders are contributing to the problem of COVID-19 cases rates surging, as restrictions continue to grow.

"Show me the data that these are sources of community spread because the data I see doesn't show that,” Mark said.

McNamer said he's been receiving postcards and letters from people across the county supporting his choice of staying open to survive.

"It empowers you, it lets you know you're doing the right thing,” he said.