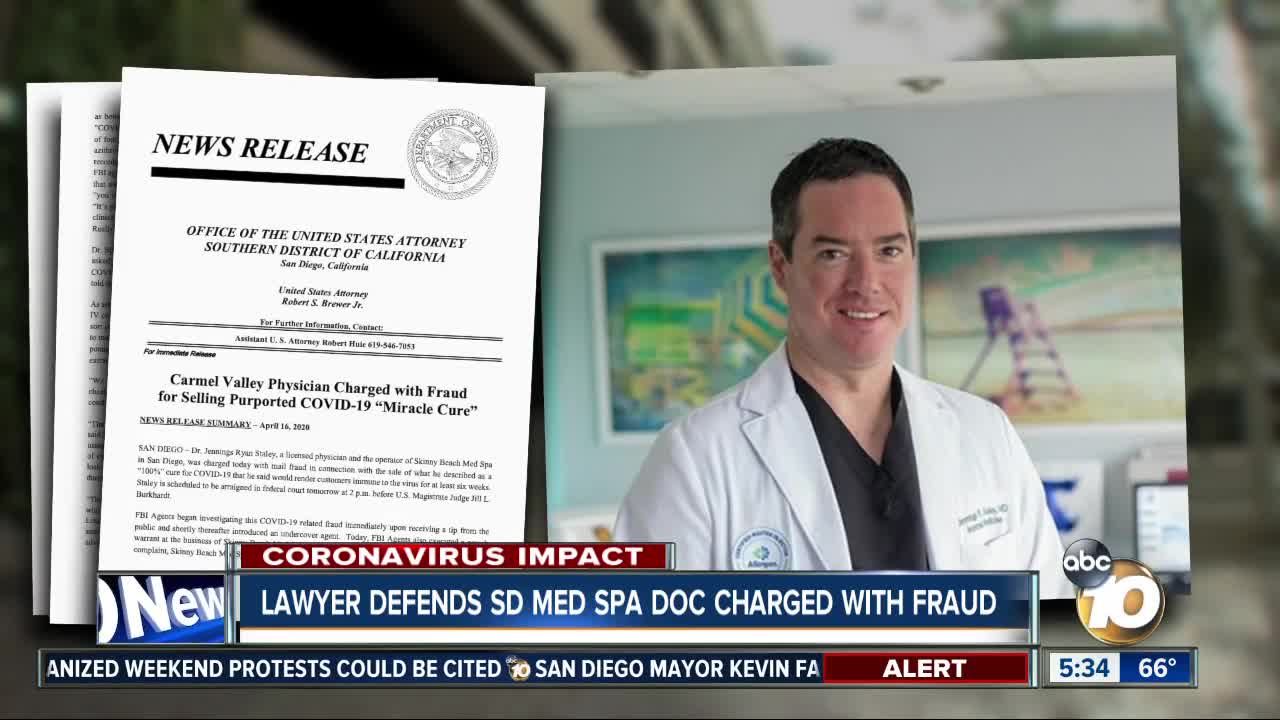 SAN DIEGO (KGTV) - A Carmel Valley medical spa doctor who’s charged with fraud over allegedly selling so-called "cures" for COVID-19 is trying to set the record straight. This week, his attorney went on camera with 10News to say that his client had no intent to defraud any patients.

“Perhaps the most important thing to get across is [that] the headlines were ‘$4,000 for magic cure’. It's not exactly what was going on at all,” says San Diego criminal defense attorney Patrick Griffin.

The interview with Griffin comes after the teleconference arraignment for Dr. Staley was held in a downtown federal courtroom last Friday. He's charged with mail fraud in connection to the sale of what he described as a "miracle cure for COVID -19", according to federal authorities.

10News first reported on Dr. Staley last month after he was accused of being unethical for advertising COVID-19 treatment packs that cost upwards of thousands of dollars and included the medications hydroxychloroquine and azithromycin. “We have an executive branch that's pushing these medications every week [and] every other day and for the same executive branch to then turn around and criminally charge Dr. Staley is just not fair,” Griffin adds.

“He's been accused by some of preying on a vulnerable population that's terrified of contracting this virus,” 10News tells Griffin who replies, “What he's doing is providing these people an option, should they choose it.”

Griffin says most of the kits that were sold were only about $600 and included 24/7 access to care. He maintains that Dr. Staley was only trying to help people.

In a federal complaint, investigators reference 10News' original story and reveal that an undercover FBI agent started talking to Dr. Staley, who reportedly said he was selling hydroxychloroquine, adding it "cures the disease" and is a "miracle cure".

“In the middle of the conversation, [the agent] alleges [the doctor] makes a comment about the hundred percent guarantee [but] how that conversation ended was with him telling the undercover [agent] that there's no guarantee,” says Griffin.

Dr. Staley’s accused of making statements to agents that, "he was smuggling in from China powdered hydroxychloroquine, falsely describing the drug as 'yam extract'."

He also reportedly offered to throw in a "bottle of 100 mg viagra" and xanax and ship the controlled substance without doing a medical exam.

“Every single pill or capsule that was sent to the undercover [agent] Dr. Staley purchased from licensed pharmacies in the United States. He didn't package any of them or do any sort of manufacturing,” adds Griffin.

In the complaint, agents released a photo of the prescriptions he shipped to them last Thursday, they claim. Agents report that he shipped azithromycin, xanax, viagra and hydroxychloroquine.

Griffin believes the allegations against his client should be taken up for discussion in front of a regulatory board, not a criminal courtroom.

As a pretrial condition, the judge said last Friday that Dr. Staley is not allowed to advertise or sell anymore virus treatments and he can't contact any alleged victims.

If convicted, he faces up to 20 years in prison.

His next court appearance is on May 19th.