Dad surprises daughter for birthday, hasn't seen her in months due to COVID-19 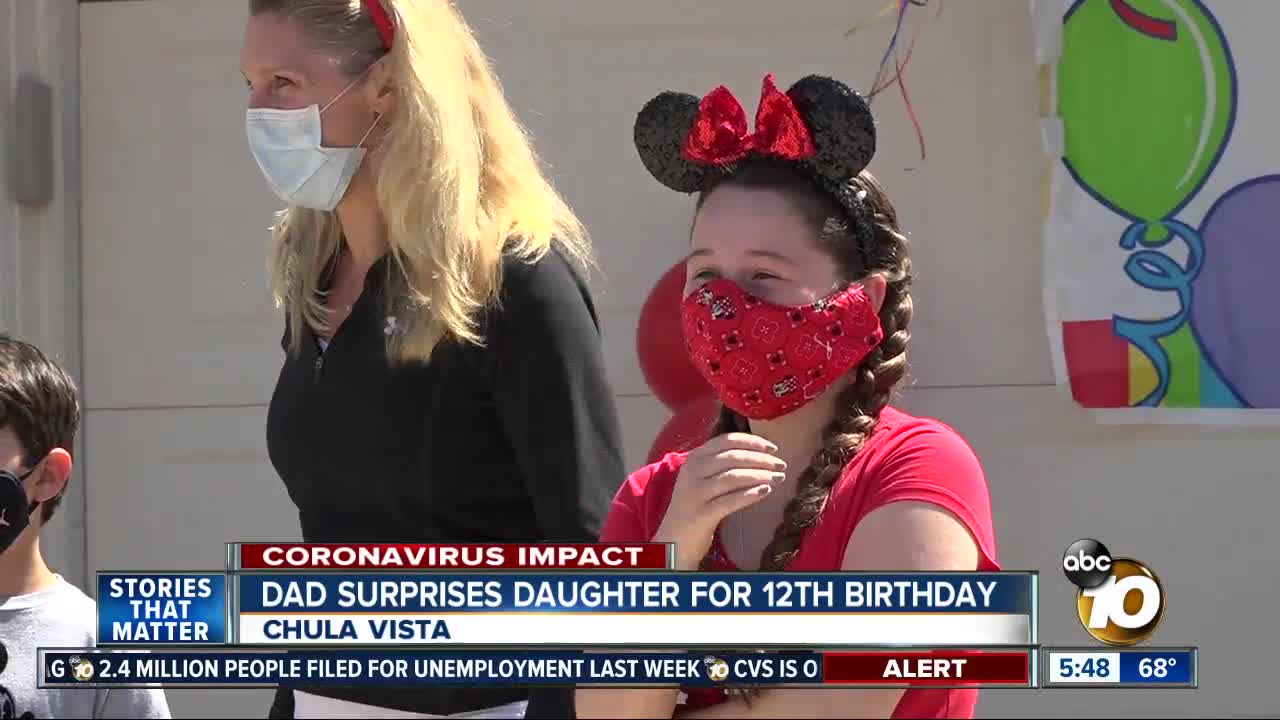 CHULA VISTA, Calif. (KGTV) - A dad surprised his daughter in Chula Vista Friday morning with a parade full of first responders for her 12th birthday.

The moment sweetened by the fact they haven't seen each other face to face since the stay-at-home order began.

David Alexander works at the University of San Diego in the security office at the school's entrance. He interacts with dozens of people each day, so he's been staying away from his three kids to keep them safe. He said they do Facetime every night.

Alexander said he was talking with his daughter one night and "she was telling me how sad it was that on her birthday she's quarantined and I kept telling her we're going to make up for it."

He said that's how he got the idea to surprise her.

One-by-one, Chula Vista Police, Parks and Recreation, a fire truck hot rod, and family members rolled in and set up around the corner.

Leading the parade was Alexander's best friend who is a firefighter. He brought out the truck, blaring sirens and flashing lights, notifying the whole neighborhood of the celebration.

Alexander sang happy birthday over the engine's speaker as the crowd gathered in front of Shay and the family on the driveway.

His daughter, Shay, sporting Minnie Mouse ears and a matching mask was overcome with emotion, clasping her hand to her mouth, choking back tears.

Alexander walked up to her, handed her a vase of flowers and said, "happy birthday! I want to give you a hug but I won't. I want to make your day special. Your confinement is sad but this isn't your party, we're going to have a party afterwards okay? And all your friends are going to know about your birthday today."

Shay clutched the vase to her chest and through tears said "thank you so much, thank you everyone for coming."

Chula Vista PD and Parks and Rec sang another rendition of happy birthday and gave her a few gifts.

Holding balloons and an armful of presents she said, "I feel so special, I feel like a queen right now this is awesome!!" Shay said she never expected something like this.

While it's not the yearly Disneyland trip, her driveway became the happiest place on earth.

Besides flowers, Alexander said he had a gift to give her once it's safe.