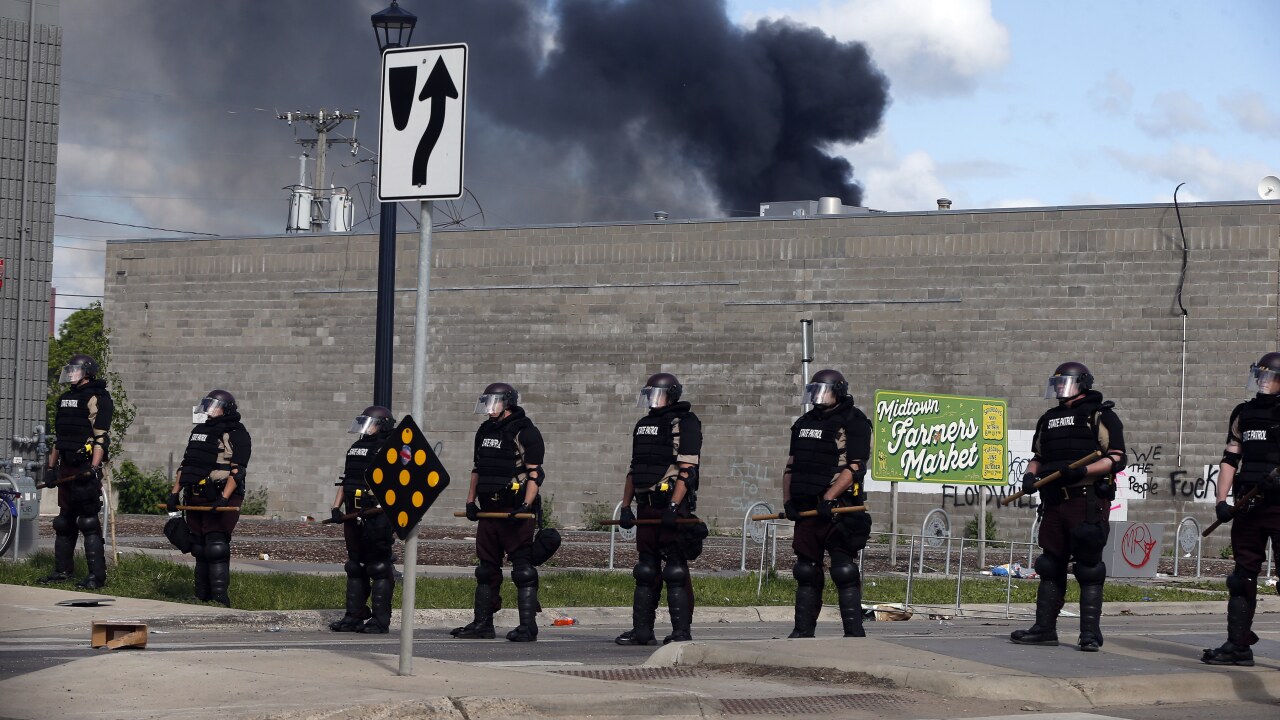 Copyright 2020 The Associated Press. All rights reserved
Jim Mone/AP
Minnesota state troopers block a street leading to the destroyed Police Third Precinct as heavy black smoke rises from a fire a few blocks away, Friday, May 29, 2020, in Minneapolis after another night of protests, fires and looting over the arrest of George Floyd who died in police custody Monday night in Minneapolis. Video shared online by a bystander showed a white officer kneeling on his neck during his arrest as he pleaded that he couldn't breathe. (AP Photo/Jim Mone)

A Texas man is facing riot charges in Minnesota for allegedly firing a semiautomatic rifle into a Minneapolis police building during demonstrations following the death of George Floyd.

A criminal complaint alleges Ivan Harrison Hunter, 26, is a member of the Boogaloo Bois, a group that espouses violent anti-government views, and that he drove to Minneapolis at the end of May with the intent of participating in a riot.

Floyd, who was Black, died on Memorial Day after a white Minneapolis police officer pressed his knee on his neck for nearly eight minutes. The incident sparked protests against police racism and brutality across the country.

Federal investigators have said he fired 13 rounds from a semiautomatic rifle into the Minneapolis Police Department's Third Precinct building while looters were inside. The building later burned.

They say they have video of the incident and Hunter was identified from a screen grab of that video.

According to the complaint, Hunter made statements on social media describing what he did in Minneapolis.

Police in Austin, Texas, stopped a pickup truck on June 3 in which Hunter was a passenger for multiple traffic violations. Hunter had six loaded magazines for a semiautomatic rifle in a tactical vest he was wearing. Officers also found multiple firearms in the truck.

Federal prosecutors have charged Carrillo in the death of a federal protective officer in Oakland, California, during a protest over Floyd’s death on the same night Hunter allegedly opened fire in Minneapolis.

MacDonald said Hunter made his initial court appearance Thursday in San Antonio, Texas. It’s unclear if he has an attorney.